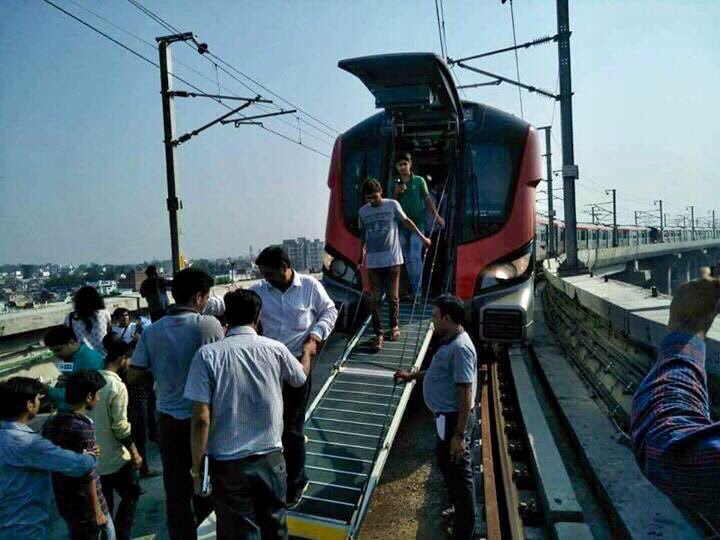 Commuters were trapped inside the Metro coaches for over two hours near the Durgapuri station, little over an hour after the service was opened to the public

A day after Union Home Minister Rajnath Singh and Uttar Pradesh Chief Minister Yogi Adityanath jointly flagged off the Lucknow Metro train, a “technical glitch” halted the service a little over an hour after it was thrown open to the public on Wednesday.

As many as 101 commuters who had entered the Metro train to experience the newly unveiled air conditioned public transport facility – to take credit of which the BJP and Samajwadi Party have been sparring for the last few days – were stuck inside the Metro coaches for over 2 hours before being evacuated through the emergency door. The air conditioning and the lights in the coaches had also stopped functioning when the train suddenly stopped at around 7.15 am before the Durgapuri station while on its way from Charbagh to Transport Nagar – the 8.5 km stretch of the project’s first phase.

While the Lucknow Metro rail Corporation (LMRC) has directed for an investigation into the matter, primary reports suggest that the train broke down because of the sudden application of emergency brakes without the knowledge of the train’s driver. The official statement released by LMRC states: “Around 7.15 am, the metro train that was on its way from Charbagh to Transport Nagar developed a technical snag. The Emergency Brakes (EB) were applied in the train when the train was travelling between Durgapuri and Mawaiya Metro stations.”

With the air conditioning in the coaches automatically switching off along with the lights, harried commuters panicked but had no way of getting out. Some like 65-year-old Mohan Pandey complained of suffocation and a rise in his blood pressure while others mocked at the tall claims made by Union home minister Rajnath Singh and chief minister Adityanath on Tuesday at the service’s inauguration ceremony.