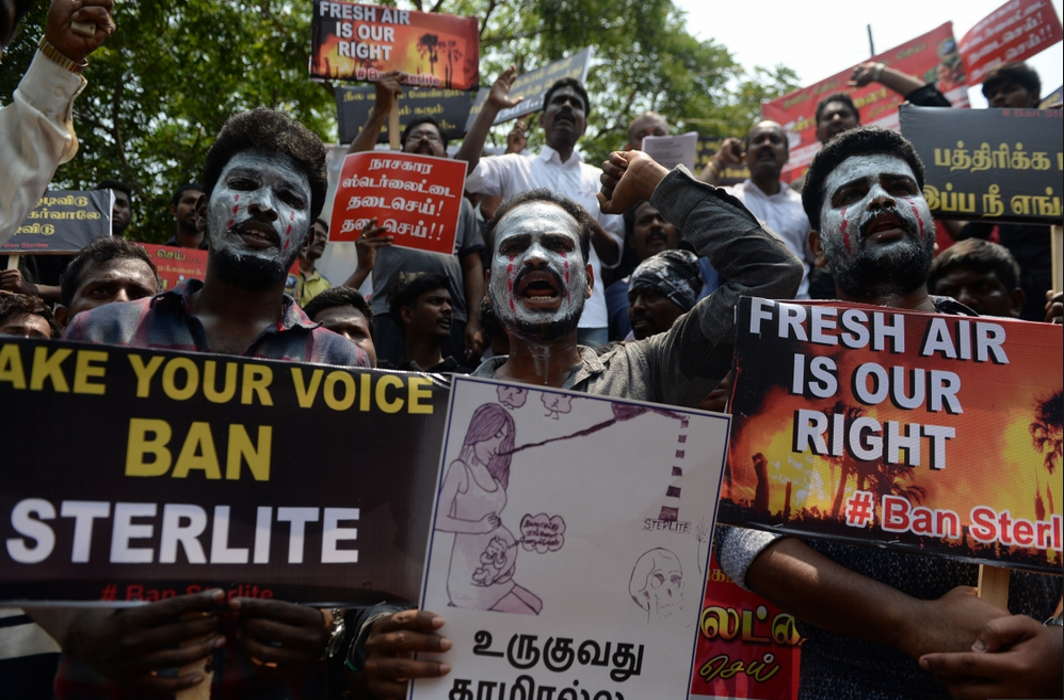 Violent protests continued on Wednesday after 11 persons were killed in police firing the day before on rampaging mobs protesting against the Vedanta-Sterlite industry for health problems caused by pollution.

While Vedanta regretted the incident and sought safety of its employees and permission to operate, it suffered a jolt as the Madras High court on Wednesday, May 23, put a stay on the construction of a new copper smelter by Vedanta’s Sterlite industries in Thoothukudi.

Following the deaths and the ensuing uproar, Union Ministry of Home Affairs sought a report from Tamil Nadu government over Tuticorin incident where 11 people were killed on Tuesday in police firing during protests against Vedanata’s Sterlite industries.

Eleven people were reported killed as police opened fire on protesters who went on a rampage on Tuesday demanding closure of a copper smelting plant in Tamil Nadu’s port city of Tuticorin.

Quoting a senior Home Ministry official, media reports said that MHA is in constant touch with the state government over the issue. Police resorted to firing after a strong crowd started marching to the district collectorate demanding to scrap of the proposed expansion of the plant.

The inquiry by retired High Court judge Aruna Jagadeesan will cover the “law and order incidents following the siege of the District Collectorate by thousands of persons violating prohibitory orders,” reports PTI. However, the government has not specified any time frame to submit the report.

National Human Rights Commission (NHRC) has issued a notice to Tamil Nadu government and Director General of Police over the police firing in Thoothukudi. The commission has asked the concerned authorities to submit the report within two weeks.

The Vedanata group has expressed regret over the police firing. It also asked the state government to ensure proper safety of its employees. “It is with great sorrow and regret that we witnessed today’s incidents around the protest at Tuticorin. The company has appealed to the government and authorities to ensure the safety of our employees, facilities and the surrounding community. The Sterlite Copper plant is currently non-operational as we await approval for the Consent to Operate,” says Vedanata group’s statement, reports News Minute.

Congress President Rahul Gandhi condemned the police firing. In a tweet, Gandhi said that police firing is a brutal example of state-sponsored terrorism.

The DMK working president MK Stalin on Wednesday slammed the state government over the police firing. Stalin called it a mass murder of innocent people.

Slamming the state government, DMK leader and Rajya Sabha MP Kanimozhi has said that Palaniswami government is not apologetic about the incident, reported CNN NEWS 18.

Tamil superstar Rajinikanth has condemned police firing at Tuticorin. In a video message, the superstar has offered condolences to victim’s family.

MK Stalin of DMK, blaming the state government for the violence, said that people had been protesting peacefully for long but the administration did not attempt to address the concerns of the people. The plant should be shut down, he said.

Actor-politician Kamal Haasan made a similar point. “Citizens are not criminals… They are the ones who lose their lives,” Haasan, who had earlier participated in the peaceful protests against the plant, said. “It is the negligence of the government… The government ignored peaceful protests,” he said.

The protestors on Wednesday set two public buses on fire at Tuticorin, reports CNN News 18. A clash took place between locals and police outside General Hospital in Thoothkudi where victims were undergoing treatment.

On Tuesday, the protesters took out a procession towards the collectorate defying prohibitory orders in the area, said chief minister Palaniswami, adding that they threw stones the collector’s office and policemen and set fire to their vehicles.

“The police had to take action under unavoidable circumstances to protect public life and property as the protesters resorted to repeated violence… police had to control the violence,” said Palaniswami, who holds the Home portfolio.

In a late night statement on Tuesday, Sterlite Cooper said it has appealed to the government and authorities to ensure safety of employees and facilities. “It’s with great sorrow and regret that we witnessed today’s incidents around the protest today at Tuticorin… Sterlite Copper plant is non-operational,” it said.

Local residents have been protesting for more than three months against the Sterlite copper smelting plant and its reported expansion. They complained that the state government had not responded to their demands. They had intensified protests demanding closure of the plant after reports came in that the group was seeking licence for expansion as the initial 25 year licence comes to an end.

Tuesday’s protests in the port city of Tuticorin, now called Thoothukudi, were to mark 100 days of their protests against the Sterlite plant, one of India’s biggest copper plants, because they felt it was polluting their environment.

The plant, which can produce 400,000 tonnes of copper a year, has been shut for more than 50 days pending permission from the state pollution regulator due to alleged non-compliance with pollution rules.

But environmental activists point out that the plant, controlled by London-headquartered Vedanta Resources, had been temporarily shut in the past too for violations.

In March 2013, hundreds of people suffered breathing difficulty, nausea and throat infection following an alleged gas leak from the plant. The plant was ordered to shut down following allegations of violating pollution control norms but the National Green Tribunal had ultimately allowed it to be reopened after authorities “failed” to establish that the gas had leaked from Sterlite.

The same year in another case spearheaded by MDMK chief Vaiko, the Supreme Court had slapped a 100 crore fine on the plant for polluting over the years. However, at that time Sterlite, run by the Vedanta group, had claimed it adheres to pollution control norms, the NDTV report said.

Sterlite began operations in 1996. It now employs about 1,000 people full time and about 2,000 on contract. It also provides indirect employment opportunity for around 25,000 people.