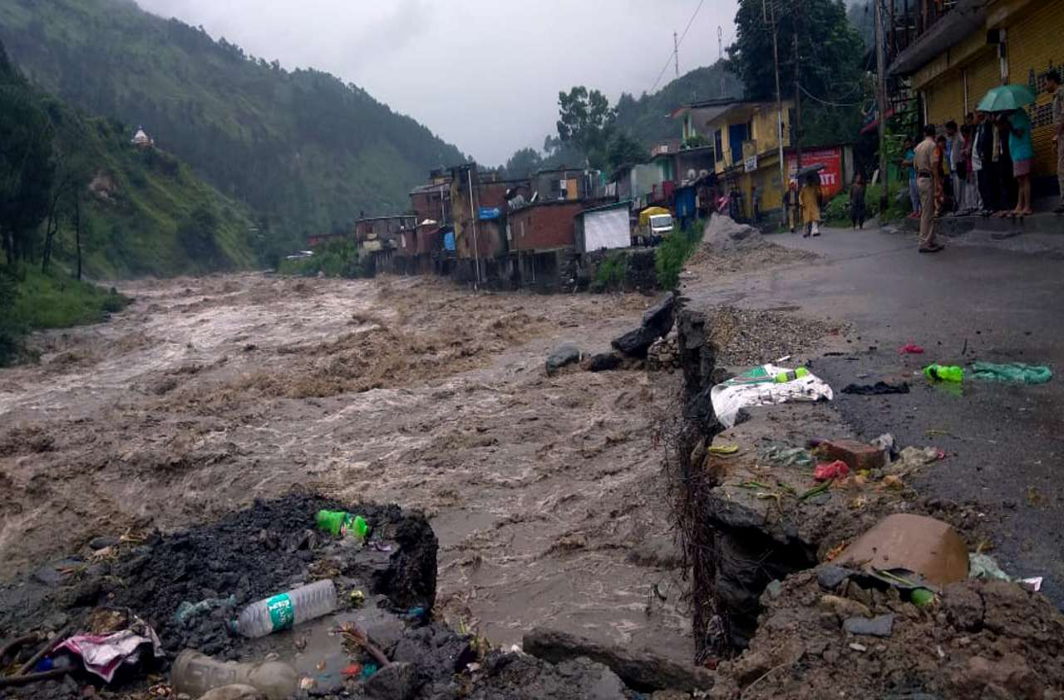 Of the 15 wettest places in the world in the past 24 hours, 13 were in India, according to global weather monitoring website El Dorado Weather. The world’s wettest place was Diamond Harbour in West Bengal, which received 220mm of rainfall in the past 24 hours. Vellore with 188mm rain was ranked second, Jamshedpur third with 172mm, Shimla seventh with 146mm and Chandigarh was 11th in the global ranking with 121mm of rain.

Rivers overflowed and in Delhi, the water level in the Yamuna crossed the warning mark today (Monday, August 19) morning.

The level at the Old Railway Bridge at 11 a.m. on August 19 was 204.88 m, above the warning level of 204.5 m. The danger mark is 205.33 m and the level in Yamuna is expected to cross it later in the day, said reports quoting an Irrigation and Flood Control Department official. The

A flood alert was issued in parts of Delhi, Haryana, Punjab and Uttar Pradesh as the Yamuna and other rivers neared the danger mark. Delhi government has asked people living in low-lying areas to move to safer places.

Most of the damage was reported from the two worst-hit states — Himachal Pradesh and Uttarakhand — as heavy rains remained unabated through the Himalayan belt. Hundreds were stranded after incessant rainfall triggered landslides, snapped road links, led to shutting down of hydropower projects and release of excess water from dams in the region.

In Himachal Pradesh, at least 24 people, including two from Nepal, were killed and nine others injured in rain-related incidents.

Twenty-five tourists, including a foreigner, who were stranded for over two days in Kullu without access to food and shelter, were rescued on Sunday.

Hundreds of tourists were also left stranded in Himachal Pradesh’s tribal Lahaul and Spiti district after a freak snowfall on Sunday cut off roads in the region, officials said. They said rescuers were on their way to Chandratal situated at an altitude of about 4,300metres or 14,100ft in the Himalayas.

The India Meteorological Department’s (IMD) office in Himachal Pradesh said on Sunday that the state received the highest ever rainfall for a 24-hour period since records began almost 70 years ago. “The state as a whole received 102.5mm and this was 1,065% more than normal,” IMD said in a statement.

Landslides cut off several parts of the state, leaving hundreds of tourists and locals stranded. Train services between Kalka and Shimla and traffic on the Chandigarh-Manali highway was disrupted. All schools and colleges in Shimla, Solan, Kullu and Bilaspur districts will be closed on Monday.

In Uttarakhand, three people were killed and 22 were reported missing following a cloudburst in Uttarakhand. Flash floods in Mori block of Uttarkashi district struck several villages, washing away houses. A woman was also swept away in the Dehradun district when her car fell into a river, officials said.

Two people were airlifted from Arakot of Uttarkashi’s Mori tehsil and brought to Sahasradhara helipad in Dehradun following a cloudburst in the area, news agency Asian News International reported on Monday. They are being shifted to Doon Hospital, it said. Two helicopters were sent to Arakot earlier with communication equipment and ropes and three medical teams have also reached Arakot.

At least 10 people were reported missing as cloudbursts wreaked havoc in several villages, damaging several houses in Arakot, Makuri and Tikochi villages in Uttarkashi district, the worst-hit region in the state.

In Punjab, three people were killed when the roof of their house collapsed. Heavy rain remained unabated in the state and neighbouring Haryana, triggering floods in some parts and prompting authorities to sound a high alert.

Several villages including Bholewal Jadid, Rajapur and Khera Bet in Punjab have been affected. In addition, 2.23-lakh cusec water was released from Ropar headworks yesterday.

Indian Army and National Disaster Relief Force (NDRF) personnel launched a rescue operation in Punjab’s Jalandhar district on Monday after major breaches were reported on the Satluj River at four places in Bholewal, Meowal and other villages under Philluar sub-division.

As per the initial reports, more than 20 people are still trapped even as NDRF teams rescued four people from Nawan Khera village.

Jalandhar’s deputy commissioner Varinder Kumar Sharma has asked people in at least 13 villages of Phillaur district to be evacuated. Officials said the situation is under control in Shahkot sub-division of Jalandhar district, where around 63 villages were put on high alert. Sharma requested residents of Shahkot to move to safer places as around 2.4 lakh cusec of water from the Sutlej is likely to hit the area during the day.

The situation also remained under control in the Shaheed Bhagat Singh Nagar district, where more than 65 villages were put on high alert. Heavy rainfall in Jalandhar lead to waterlogging in several places across the city.

In Uttar Pradesh, several rivers, including Ganga, Yamuna and Ghaghra, are in spate. The Ganga is flowing above the danger mark in Badaun, Garhmukteshwar, Naraura and Farrukhabad. The Sharda river at Paliakalan and the Ghaghra river at Elginbridge are flowing above the red mark, authorities said.

In Kerala, ground-penetrating radars were used to locate bodies at Kavalappara in Malappuram and Puthumala in Wayanad, where massive landslides had wiped out two villages. A government report said 121 people have lost their lives since August 8 and some 47,000 people are still in 296 relief camps.

The number of deaths in rain-related incidents in flood-hit Karnataka went up to 76, with the recovery of 10 more bodies, while 10 persons are were reported missing. More than 500 relief camps are still open in the state, helping over 2 lakh people with food, water and shelter, officials said.

In West Bengal, the weather in large parts of the state’s south, including capital Kolkata, improved after two days of torrential downpour that led to waterlogging in many areas and snapped road links at several places. In neighbouring Odisha, while the flood threat was called off, the weather office forecast heavy rainfall in the next two days.

Heavy rain also hit several parts of Chennai and its neighbourhood with the weather office predicting more showers over the next two days.

As of August 15, a total of 1,058 persons have died due to rain-related incidents during the monsoon season that started on June 1 with one-fourth of the deaths reported from Maharashtra.