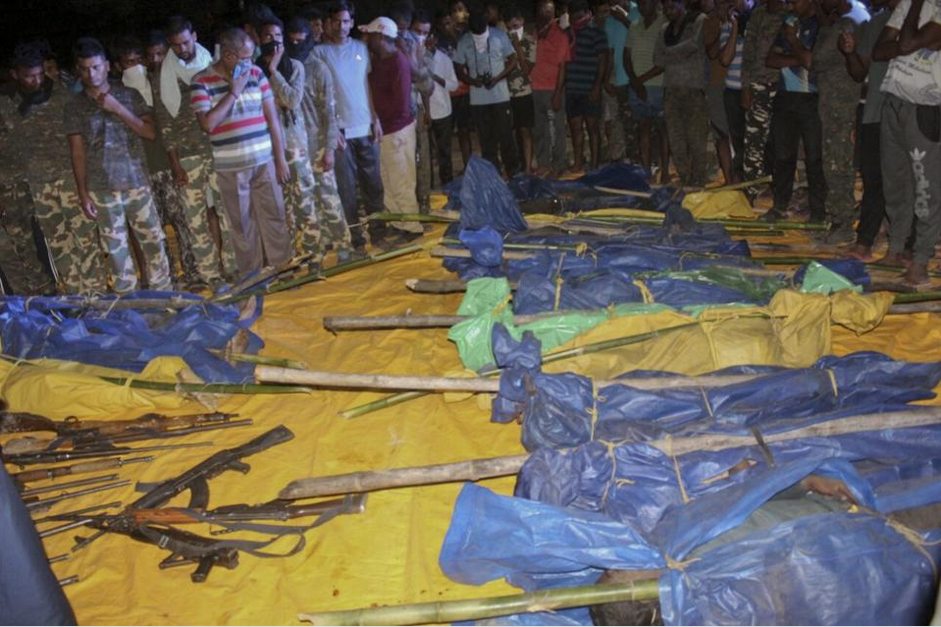 Maharashtra police commandos have killed at least 37 Maoists including 19 women rebels in operations over two days in the state’s Gadchiroli district.

Sixteen rebels had been killed on Sunday and at least six Maoists were killed in a fresh gunfight in Maharashtra’s Gadchiroli district and 15 more bodies were recovered from the Sunday encounter in the region.

Dr Abhinav Deshmukh, the superintendent of police (SP) of Gadchiroli, said his team recovered the decomposing bodies of the ultra-leftists, including that of two women, floating on the Indravati river on Tuesday morning. The bodies, which were bloated and had started to decompose, were found floating in the river which flows along the Maharashtra-Chhattisgarh border.

The police were also reported to have recovered some weapons. Till now, the police have recovered a sophisticated cache of arms, including two AK-47s, two INSAS, three SLRs, three .303s, one 58-mm gun, eight 12 bore rifles, a musket, pittus and detonators, besides Naxal literature from these operations, said media reports quoting police officials.

The encounter on Monday evening between the Maoists and the crack commandos of the C-60 force took place in Rajaram Khandala jungle in Jimlagatta region of the district, 60 km from the scene of Sunday’s ambush.

Of the six maoists killed in the operation, four were reported to be women.

The C-60 commandos, along with the district police and CRPF jawans continued intense search and combing operations in south Gadchiroli since Saturday evening, resulting in the fresh encounter on Monday, he added.

“We had information about the movement of Perimili dalam of the CPI (Maoist) near Tadgaon. So, we launched an operation on Saturday evening. On Sunday, around 9.30am, an encounter ensued that continued for hours. This is the first time that two divisional committee members of the CPI (Maoist) have been killed in one operation,” said DIG (Gadchiroli range) Ankush Shinde according to a report in The Hindustan Times (HT).

A high-ranking commander of the Aheri Dalam, identified as Nandu, is among those killed. Maharashtra’s Additional Director-General of Police (L&O) Bipin Bihari said that so far the C-60 commando forces have eliminated three Maoist dalam commanders.

In the separate encounters on Sunday and Monday, a total of 19 women and 18 male Maoists have been gunned down, but the toll is expected to rise.

Officials said that the Sironcha and Perimeli dalams have been totally wiped out in the two-day operations.

This is one of the biggest blows to the extremist rebel group in recent years, officials said.

Search and combing operations continue, though interrupted by heavy rain and bad weather, in the entire Gadchiroli district.

Other Maoist-affected states — Madhya Pradesh, Chhattisgarh, Odisha, Jharkhand, Andhra Pradesh, Telangana — are on high alert ever since the anti-Maoist operations were launched in the district.