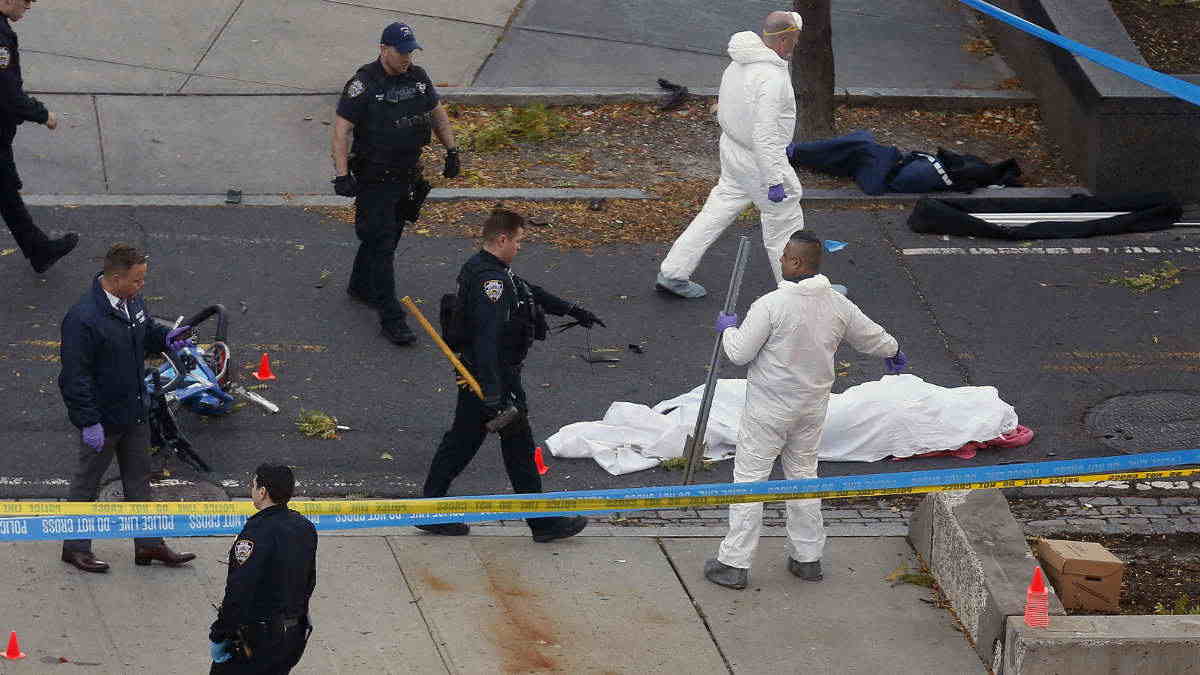 The 29-year-old Uzbek national Sayfullo Saipov who executed the attack is reportedly associated with Islamic State but was “radicalised domestically”, said NY Governor

New York: An Uzbek immigrant accused of killing eight people in New York City by driving a rental truck down a riverfront bike path on Tuesday (US Time) appeared to have acted alone, but the Halloween Day attack had all the hallmarks of terrorism, authorities said.

The Uzbek national – 29-year-old Sayfullo Saipov – who was shot by police and arrested moments after the rampage on the Lower West Side of Manhattan, had allegedly left a note saying he carried out the attack in the name of the militant Islamic State group.

“He’s a depraved coward is what he is, and he was associated with ISIS, and he was radicalised domestically,” Governor Cuomo said.

The death toll in the attack paled in comparison to dozens killed in similar assaults last year in France and Germany. However, it was still the bloodiest single attack on New York City since Sept. 11, 2001, when suicide hijackers crashed two jetliners into the World Trade Center, killing more than 2,600 people.

The attacker struck just a few blocks from the site of the World Trade Center memorial, running over afternoon riders on the path before reaching a road and ploughing into a school bus. He then jumped out of the truck wielding what turned out to be a pellet gun, and a paintball gun. He was chased and shot in the stomach by a police officer but survived and was arrested.

Saipov had reportedly arrived in the US in 2010. He is said to have a Florida driver’s license but was reportedly living in Paterson, New Jersey, with family, sources told local media.

US President Donald Trump has called for the green card lottery to be scrapped, saying it allowed the New York truck attack suspect into the US.

In a series of tweets he called for the immigration programme to be replaced with a merit-based system. Trump also pinned blame for the scheme on Senator Chuck Schumer, who accused Trump of cutting anti-terror funding.

In NYC, looks like another attack by a very sick and deranged person. Law enforcement is following this closely. NOT IN THE U.S.A.!

We must not allow ISIS to return, or enter, our country after defeating them in the Middle East and elsewhere. Enough!

The terrorist came into our country through what is called the "Diversity Visa Lottery Program," a Chuck Schumer beauty. I want merit based.

We are fighting hard for Merit Based immigration, no more Democrat Lottery Systems. We must get MUCH tougher (and smarter). @foxandfriends

The diversity visa lottery programme, also known as the green card lottery, grants permanent US residency every year to around 50,000 immigrants.

Senator Schumer played a key role in crafting the legislation creating the lottery system in 1990, according to the Washington Post. It was passed in a cross-party vote and signed into law by a Republican President, George HW Bush.

In addition to the eight fatalities at least 11 people were hospitalized for injuries described as serious but not life-threatening. That excluded the suspect, who underwent surgery for gunshot wounds.

Six victims were pronounced dead at the scene and two more at a nearby hospital, Police Commissioner James O‘Neill said.

Five of the dead were Argentine tourists, visiting New York as part of a group of friends celebrating the 30th anniversary of their high school graduation. Belgium’s foreign minister said a Belgian citizen was also among those killed.

Despite the attack, thousands of costumed Halloween revelers turned out hours later for New York City’s main Halloween parade, which went on as scheduled on Tuesday night with a heightened police presence just a few blocks away.

Uzbekistan’s President Shavkat Mirziyoyev told U.S. President Donald Trump his government would do all it could to help investigate the “extremely brutal” attack.

Authorities late on Tuesday surrounded a house in Paterson where, according to the New York Times, Saipov was believed to have lived. Paterson, known for its large immigrant population, is home to about 150,000 people, including 25,000 to 30,000 Muslims.

Indian actor Priyanka Chopra, known to American audiences for her acclaimed performance in the popular television series Quantico, claimed that the attack took place “5 blocks from my (New York) home”. Priyanka is currently shooting for the third season of Quantico in New York.

This happened 5 blocks from my home,As I drive back home from work,Dreary sirens remind me that this is the state of the world #nyc #peace 😞