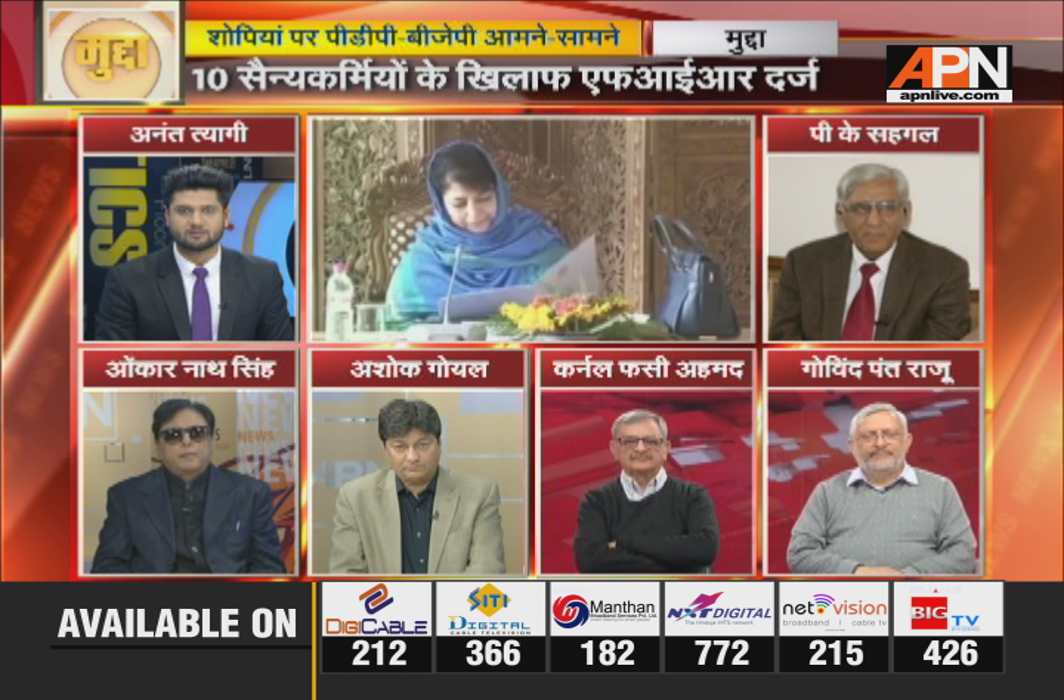 Mudda panel examines BJP legislators’ demand for withdrawal of FIR against security forces; claims that a case should be registered against stone-pelters who provoked the firing instead

The alliance of the Bharatiya Janata Party (BJP) and People’s Democratic Party (PDP) in Jammu and Kashmir is in a state of turmoil, after the state’s chief minister, Mehbooba Mufti, asserted in the legislative assembly that the FIR registered against army personnel for killing civilians in Shopian district of the valley would be followed up to its logical conclusion.

The J&K police registered an FIR under sections 302 (murder), 307 (attempt to murder) and 336 (endangering life) of the Indian Penal Code against the Indian Army’s 10 Garhwal Regiment after two youths were killed in firing by soldiers in the Gunowpora village of Shopian district last week. While the FIR names Major Aditya of the Garhwal Rifles, the Army has claimed that the security forces opened fire only after being attacked by stone-pelters. It further claims that there was an attempt made to lynch a junior commissioned officer.

Hitting out at the PDP government, BJP legislators on Tuesday demanded the withdrawal of the FIR against security forces. They said that, instead, a case should be registered against the youths who threw stones at the army convoy.

Taking up the issue in APN’s popular debate show, Mudda, anchor Anant Tyagi questioned panellists on whether it was justified to blame army personnel before a proper probe has been conducted and whether or not the BJP will withdraw its support to its ally PDP if the ruling government in Kashmir does not take back the case registered against security forces.

Strongly condemning decision to lodge a case against the security forces, Col Ahmed termed the FIR as an “outrageous act”. Stating that the Army never indulges in unnecessary firing, Col Ahmed claimed that the whole issue is politically driven and leaders of any party must not politicise issues related to the actions of the Indian Army.

Stating that the army firing was a result of self-defence, Goyal said that the FIR filed against the army was an unnecessary step taken by the J&K police. Asked whether or not the saffron party will withdraw its support to the government if the PDP doesn’t withdraw the case, he only asserted that no unacceptable action will be taken against any security personnel and the Mehbooba Mufti government will be supportive to the centre on this issue.

Raju felt that there are least possibilities that any action will be taken against the army. He said that the army has helped civilians in Kashmir in several instances and has no personal score against anyone. A case being registered against the security forces won’t hurt the morale of the army, Raju said.

Hitting out at the PDP and BJP, Onkar Nath Singh said that the saffron government is making an issue out of nothing. While the army took a justifiable step by opening fire in chaotic circumstances, the police did their own job by filing an FIR based on the complaint by the family of youths who died in the firing.

There had been a continuing unrest in the valley since the killing of the two youths in Shopian and the subsequent FIR lodged against the army. Meanwhile, protestors have even blamed the PDP-BJP coalition government for purportedly appeasing anti-nationals and separatists in the valley.