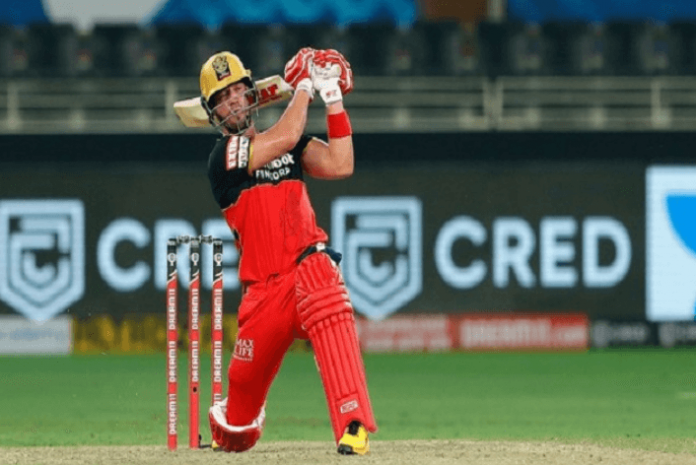 AB de Villiers’ 73 off 33 helped Royal Challengers Bangalore thrash Kolkata Knight Riders by 82 runs in Sharjah on Monday. After opting to bat, RCB posted 194/2 on the board. Openers Aaron Finch (47 off 37) and Devdutt Padikkal (32 off 23 balls) laid a strong foundation for de Villiers and skipper Virat Kohli (33 off 28 balls), who played the supporting role.

RCB had a good start, but as the ball got older, their run rate was dropped. In the middle overs the team was struggling to score runs but in the last five overs, Kohli and De Villiers together looted 83 runs. De Villiers accounted for 65 of them.

The duo of RCB spinners, Yuzvendra Chahal (1/12) and Washington Sundar (2/20) strangulated their opponents in the middle overs and stopped them on 112. Chasing 195, Kolkata Knight Riders lost by 82 runs.

KKR dropped Sunil Narine as he was reported by on-field umpires for a suspect action in their previous game. Opener Tom Banton made his IPL debut but failed to score runs. Andre Russell was fit and bowled beautifully in beginning but he gave 34 runs in his last two overs against De Villiers.

Kohli said at the post-match presentation that the pitch was drier. Every batsman struggled on the pitch except one superhuman. The team have targeted to reach at 165, but posted 194 on the board. KKR skipper Dinesh Karthik admitted that de Villiers’ knock turned the match into RCB side. He said AB is a world-class player and it is very hard to stop him.

With this win, Virat Kohli’s RCB climbed to the third place in the Indian Premier League 2020 pointstable. KKR, on the other hand, have slipped to the fourth spot with eight points from seven games. Mumbai Indians and Delhi Capitals occupy the top two positions in the pointstable.