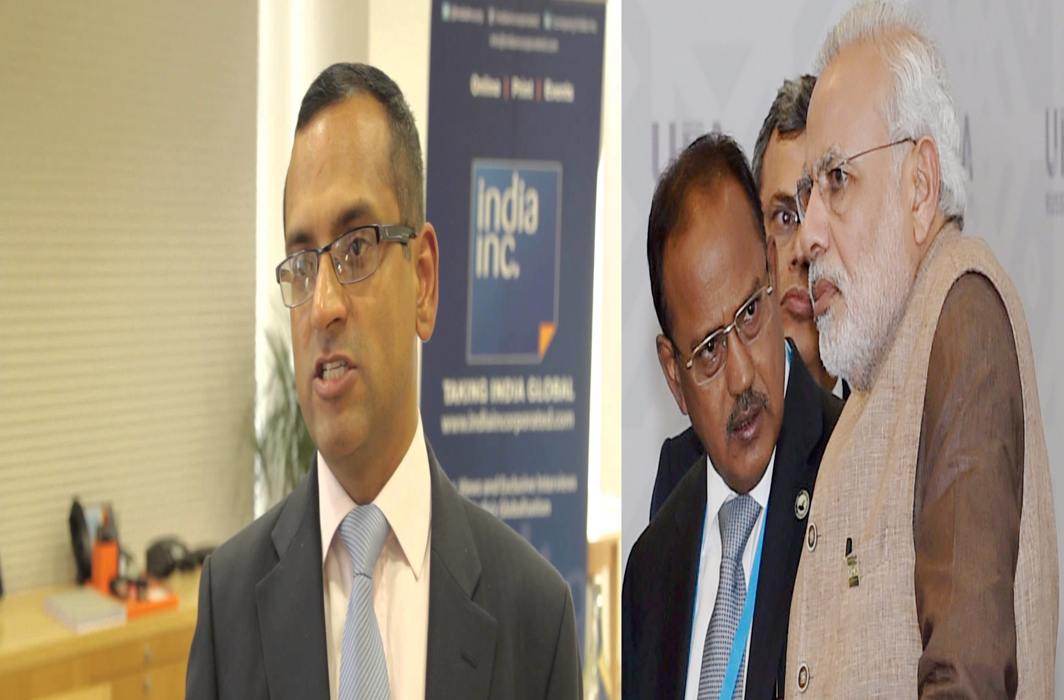 Weeks after questions over BJP national president Amit Shah’s son Jay Shah’s business dealings were silenced through judicial gag orders, the saffron party now finds itself in a spot over allegations made against another son – that of Ajit Doval, National Security Adviser and close confidante of Prime Minister Narendra Modi.

A report published by The Wire, on Saturday, raised the possibility of a “prospect of conflict of interest” in the running of India Foundation, an influential think-tank, of which NSA Ajit Doval’s son Shaurya Doval is the executive director. The Foundation has as its directors Nirmala Sitharaman and Suresh Prabhu, Union ministers for defence and commerce respectively along with MJ Akbar and Jayant Sinha, ministers of state for external affairs and civil aviation respectively. In addition to the four members of Prime Minister Narendra Modi’s council of ministers, the Foundation also lists Ram Madhav, the influential BJP national general secretary with his roots in the RSS, as its director.

The news report says: “the India Foundation’s opaque financials, the presence of senior ministers as directors and the fact that executive director Shaurya Doval’s day job is running Gemini Financial Services – a firm that specialises in ‘transactions and capital flows between the OECD (Organisation for Economic Co-operation and Development) and the emerging Asian economies’ – also raise the prospect of conflict of interest and lobbying, problems Narendra Modi had promised to banish forever from the corridors of power.”

The report goes on to say that “every event the Foundation organises is attended by key decision-makers in that field, which in turn guarantees not just a full house but also sponsorship – both by government bodies and private companies, Indian and foreign” and that “despite the presence of ministers on its board of directors, it refuses to part with any information about its source of revenue.”

Reacting sharply to the allegations and speculations raised in the report by The Wire, former Union minister and Congress veteran Kapil Sibal, on Saturday, demanded a CBI inquiry against the India Foundation and said that “Prime Minister Narendra Modi should fire all the four ministers who are on the board of the India Foundation. We want to ask Modiji when he will fire them”.

Sibal’s broadside against the BJP and Prime Minister Modi came soon after Congress vice president Rahul Gandhi took a swipe at the saffron party, drawing parallels between the rise in fortunes of Amit Shah’s son and the purported impropriety by the son for Modi’s National Security Adviser.

Much to the chagrin of the BJP, the Congress had coined the name – Shah-Zada – for Amit Shah’s son Jay Shah when The Wire published a story about a 16000-fold rise in the junior Shah’s company’s turnover during the period since Modi became Prime Minister in May 2014. Rahul’s ‘Ajit Shaurya Gatha’ was a clear reference to the meteoric rise of India Foundation, run by NSA Ajit Doval’s son Shaurya.

The report in The Wire claims that its author, senior journalist Swati Chaturvedi had sent a detailed questionnaire “to all six high-profile directors” of the India Foundation seeking their response the speculation of a possible conflict of interest and over the issue of propriety, or the lack of it, in the association of top ministers with a think-tank whose founder also deals with company that directly or indirectly have dealings with the Union government.

The report states that: “The ministers chose not to reply while Madhav promised that the ‘appropriate person’ would respond with answers. That never happened. All that Shaurya Doval was prepared to tell The Wire when asked about the source of the foundation’s revenue was: “Conferences, Advertisement, Journal.” He did not answer questions about the origins of this revenue or explain how the India Foundation, which he said was registered as a trust, financed its day-to-day operations, including the rent for its posh premises on Hailey Road in Lutyens’ Delhi, and salaries for its staff.”

“The Wire wrote to the four ministers who serve as directors about the propriety of the India Foundation hosting events funded by donations or sponsorship from companies that may have business matters with their ministries. ‘Would you accept that there is a conflict of interest involved in you serving as a director on a foundation that receives funding, directly or indirectly, from foreign companies,’ The Wire asked Nirmala Sitharaman, ‘especially those that have dealings with ministries you have handled such as commerce and industry, and now defence?’ Similar questions were put to Prabhu, Akbar and Sinha. Till the time of publication, none of them chose to reply,” the report adds further.

By Saturday evening, #AjitKiShauryaGatha had become a top trending subject on Twitter with several users, many Congress leaders and sympathizers, journalists, activists and people not favourably disposed towards the BJP sharing the report and posing questions to the BJP over the party’s silence on the issue.