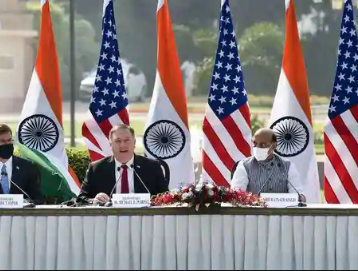 China has said that the ongoing border issue with India is a bilateral matter which doesn’t need an intervention from the third party. The statement came after the US Secretary of State Mike Pompeo pledged strong support for India amid its efforts to defend its sovereignty – a reference to the military stand-off in Ladakh.

A statement released by the Chinese Embassy said that the boundary question is a bilateral matter between India and China. The two sides through diplomatic and military channels have been discussing disengagement and de-escalation with the border areas, both the countries have the wisdom to handle their differences and there is no space for a third party to intervene, said the statement.

China said the US proposed Indo-pacific strategy is intended to provoke confrontation among other groups to stoke geopolitical competition, in order to maintain its dominance. The US engagement in unilateralism and bullying while hyping the so-called China threat, is simply an excuse to contain China’s development and maintain its global hegemony, it added.

The development of bilateral ties between India-US should not infringe upon the legitimate rights and interest of a third party, rather should be made favourable for regional peace, development and stability, China said.

On Tuesday, Pompeo had said that the US stands along with India as the latter confronts threat to its sovereignty and security. In a clear message to China, the US vowed to step up their cooperation towards a free, open and peaceful Indo-Pacific, promoting security and prosperity of the region and beyond.

Pompey arrived in India along with Defence Secretary Mark T Esper for the third edition of the US-India 2+2 dialogue on Monday.

External Affairs Minister S Jaishankar and Defence Minister Rajnath Singh held the 2+2 talks with their US counterparts, during which the long-awaited Basic Exchange and Cooperation Agreement or BECA, which gives India access to classified geo-spatial data as well as critical information having significant military applications from the US, was signed.

India’s tense border standoff with China in eastern Ladakh escalated after a clash at Galwan Valley in which 20 Indian soldiers and an unknown number of Chinese soldiers were killed.Both Indian and Chinese armies have remained in a deadlock along the Ladakh border even after various rounds of deliberations between top officials of the two nations.With temperatures falling down to minus 20-degree Celsius, fresh challenges have cropped up for the troops of both sides.