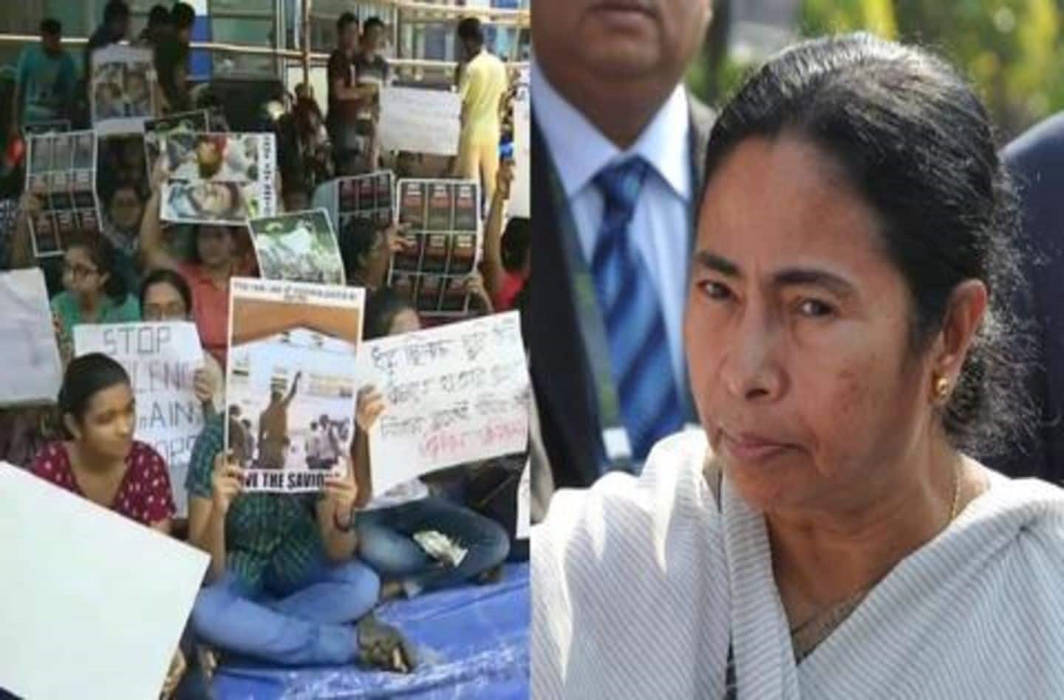 Medical services across the country may be hit tomorrow with doctors deciding to express solidarity with their protesting colleagues in Kolkata.

Several resident doctors at the All India Institute of Medical Sciences (AIIMS) worked with bandages on their heads today (Thursday, June 13) and have decided to boycott work on Friday in solidarity with the Indian Medical Association’s (IMA) direction to all its State units to protest against the recent attack on doctors in Kolkata.

The assault on junior doctors following the death of a patient at the State-run Nil Ratan Sircar Medical College in Kolkata on June 10 night left an intern seriously injured and the strike, which was initiated there, spread to medical institutions in the district.

Also Read: Adani gets approval for controversial coal mine project in Australia

The Indian Medical Association (IMA) on June 12 also directed the members of all its State branches to stage protests and wear black badges on June 14. The AIIMS Resident Doctors’ Association has urged the RDAs across the country to join the token strike.

In a statement issued on June 13, the AIIMS RDA said that the ongoing and worsening of violence against medical doctors in West Bengal is worrisome and disheartening.

“There is a complete breakdown of law and order, with reports of mobs attacking doctor hostels with weapons. The government has failed to provide protection and justice to doctors,” the statement read.

“AIIMS RDA condemns this in words and in spirit. Residents across the country are deeply hurt by these turn of events. Keeping in view of our commitment towards safe and non-violent working environment for residents, AIIMS RDA stands in support of our colleagues in West Bengal and has decided to hold protest on June 13 which would be followed by one day strike of work on June 14 which include OPD, routine and ward services, except for emergency services,” the statement said.

They urged the West Bengal Chief Minister Mamta Banerjee to intervene in the matter and address the security concerns so that residents can continue serving patients.

In a communique to all its State presidents and secretaries, the IMA has asked them to organise demonstrations in front of the district Collectors’ offices from 10 a.m. to 12 noon on June 14 and hand over a memorandum addressed to the Prime Minister to the Collectors in every district.

The Delhi Medical Association (DMA) has also urged its members to observe a “Black Day” on June 14 against the brutal attack.

Simultaneously, all the local branches and individual members of the IMA will send an appeal to the Prime Minister and the Union Home Minister, demanding a Central Act on violence against doctors and hospitals.

The IMA has also urged its State branches to communicate the information to the government doctors’ organisations of the States, request for their support and issue a press statement to this effect.

“The gruesome incident in NRS Medical College, Kolkata, is of barbaric nature. IMA condemns the violence perpetrated on a young doctor. The entire medical fraternity expresses solidarity with the resident doctors who are on strike. The IMA headquarters hereby declares All India Protest Day on Friday,” an IMA statement said.

Emergency wards, outdoor facilities and pathological units of many State-run medical colleges and hospitals and a number of private medical facilities in West Bengal have remained closed over the past two days in the wake of the protests.

Protesting doctors have refused to call off their strike despite a four-hour ultimatum from Mamata Banerjee and have instead accused the chief minister of threatening them.

Banerjee, who visited the state-run SSKM Hospital on Thursday, asked the doctors against an attack on their colleague to return to work within four hours or vacate the hostels. She added that those demonstrating were not doctors but outsiders who wanted to create trouble in the state. “The government will not support them in any way. I condemn doctors who have gone on strike. Policemen die in line of duty but the police don’t go on a strike,” she said.

As doctors raised slogans of ‘we want justice’, Banerjee said, “You have to give service to the people. You cannot be a doctor without providing service to the people. Similarly, police cannot call for a strike. It is their duty. It is unfortunate that the BJP and CPI(M) are doing politics here. They are playing Hindu-Muslim card here. Health minister Chandrima Bhattacharya met junior doctors on Wednesday and requested them to speak to me. I was holding the call but they just refused to talk to me over phone.”

Mamata Banerjee expressed anger at the stir, and gave the doctors a deadline to resume duty. “The government will not take any responsibility of those who would not do so (join duty). They will also have to vacate the hostels (if they don’t join work),” said the chief minister, though she did not detail the punitive action.

“The state spends Rs 25 lakh on each doctor and then they shirk work. This won’t be tolerated. Are they doctors!” she said.

Her visit left the protesters angry, who said she should have visited the NRS Medical College and Hospital instead where the junior doctor was assaulted by family members of a patient alleging negligence.

The state-wide protest was triggered after Pariboho Mukherjee, a junior doctor at the NRS Medical College and Hospital, was beaten up by the family members of a patient who alleged that he died because of negligence. The doctor suffered a head injury and is in critical care at a private hospital.

Reports quoting doctors attending to him said his condition was stable now.