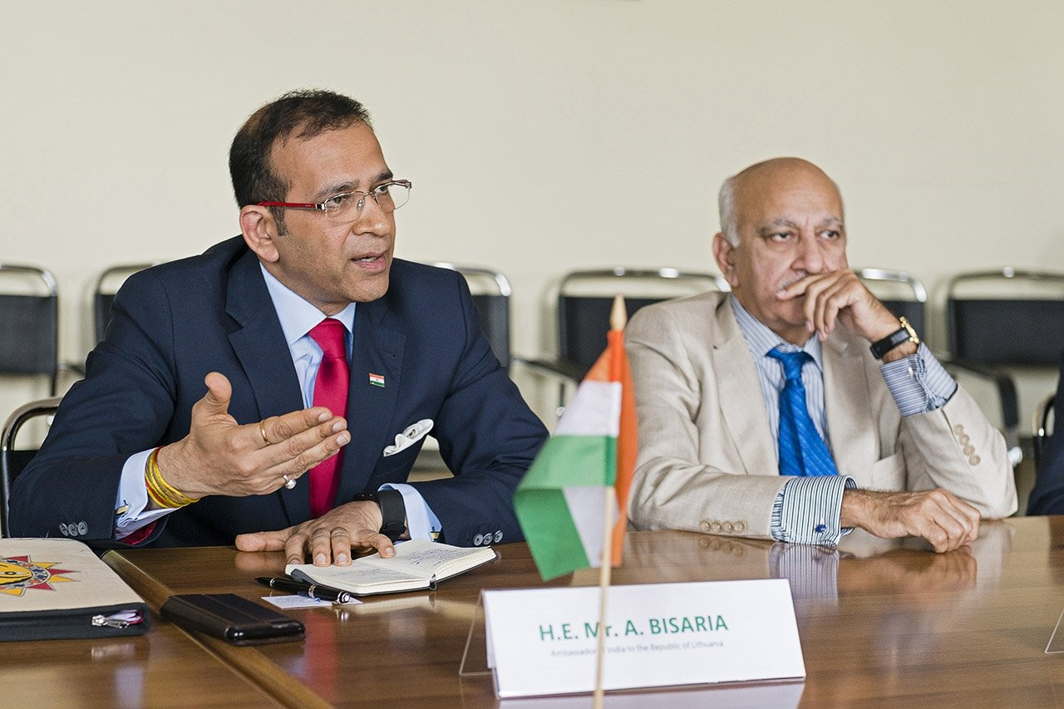 India has decided to appoint Ajay Bisaria as its new High Commissioner to Pakistan replacing incumbent Gautam Bambawale, who is now proceeding to China.

Ajay Bisaria, India’s “most presentable face” is an expert on Russia and will be, according to the Indian media, able to “address Russia’s nascent strategic proximity to Pakistan which will no doubt be an important focus area for him.”

Though officially the Ministry of External Affairs (MEA) has not made any announcement, the news was leaked to the Indian media and is being highlighted in both countries, as reshuffle at this level is always of great interest.

The Indian media says a 1987 batch IFS officer, the new High Commissioner to Pakistan, Bisaria, has had an impeccable career as a diplomat. A savvy diplomat, Bisaria has also served as private secretary and aide to former Prime Minister Atal Bihari Vajpayee from 1999 to 2004 and in that capacity handled a range of defence, economic and foreign policy issues.

Fluent in Russian, Bisaria headed the Eurasia division from 2009 to 2014. As his official profile says, he helped articulate an ambitious policy vision for India in Central Asia and coordinated India’s approach to six annual Indo-Russian summits. Bisaria also worked on India’s policy for multilateral entities like SCO and the Russia-India-China trilateral.

For the outgoing envoy, Bambawale, his must be the shortest stint for any Indian High Commissioner in Pakistan. Bambawale had been given the role on January 13, 2016 and it’s not been even a year before he’s being sent off to China. Bambawale came to Pakistan after heading the Indian mission in Bhutan, and his posting to China shows the great regard that the Modi government has in his diplomacy skills. It would not be unlikely that on completion of his posting in Beijing, Bambawale could be brought back to New Delhi as the new foreign secretary if there is an opening at the South Block.

Bambawale will be remembered in Islamabad for his cool demeanor in the face of some of the most difficult periods in bilateral relations. Heating up of the Line of Control (LoC) which saw body bags on both sides with scores injured and homes destroyed to Pakistan expelling officers from his mission for undesirable activities to the arrest of a high-profile Indian spy Commander Kulbhushan Jadhav, nothing appeared to have gone right during his tenure.

However, Bambawale also experienced some embarrassing moments for his remarks on Kashmir which led to the Karachi Chamber of Commerce canceling an event in which India’s top diplomat was to speak.

In his remarks in Karachi, Gautam Bambawale had called Kashmir an ‘internal matter’ of India.  “There are problems in both India and Pakistan and you [Pakistan] should focus on resolving your problems before looking into the problems of other countries,” he had said.

Even the expected foreign secretary level talks scheduled after the arrival of Bambawale had to be postponed mutually after the Pathankot terrorist attack. However, Bambawale and his wife, Amita Sathe Bambawale were a popular couple on the diplomatic circuit and frequent guests at homes of Pakistani admires.

Amita even indulged in some food diplomacy where she shared some exclusive Indian recipes with an NGO which runs a café and these are even now the most popular dishes on the menu. Bambawale is a fan of Pakistan’s pride — poet Kishwar Naheed — and enjoyed hearing her poetry saying he understood Urdu but could not read it.

Knowing the constraints in the time that he spent here, the high commissioner concentrated on trade as a means to improve and bring some semblance to bilateral relations.

“…We want to strengthen the relationship between India and Pakistan and that will be my effort while I am posted there….The road to normalisation of relations between India and Pakistan can only be accessed through trade and the Lahore Chamber of Commerce and Industry (LCCI) can play a critical role in this regard, says the Indian envoy”, he had stated, adding that there was no better way of improving bilateral relations than mutually beneficial economic ties.

It was in his tenure that the Indian government introduced multiple visas for three years exclusively for businessmen. These include visits to 15 Indian cities with exemption from police reporting.

Moreover, the businessmen can travel to India by road and return via air. A 1984 batch IFS officer, Bambawale has served as joint secretary of East Asia Division where he handled both China and Japan.

He, in fact, was one of the longest serving joint secretaries there with his tenure lasting from 2009 to 2014.

According to the Indian media, “there are few who know China better than him as he has also served as India’s DCM in Beijing. His understanding of the region is also expected to help India deal with the North Korea situation more effectively.

Bambawale has also served as India’s ambassador to Bhutan and is well-versed with the situation at Doklam which is claimed by China.  As a young IFS officer, Bambawale opted to learn mandarin Chinese and also served in Beijing and Hong Kong from 1985 to 1991”.