The Samajwadi Party and the Rashtriya Lok Dal have contested assembly elections and Lok Sabha bypolls together since 2017. 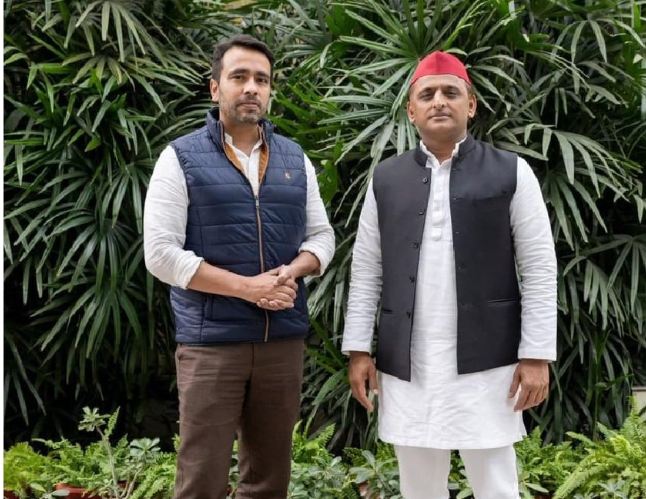 It is being speculated that both of them met over alliance and seat-sharing in the upcoming elections and official announcements could be made on Wednesday.

After the poll meeting, both the leaders shared the picture on Twitter and their captions are indicating that a deal may be close between the regional parties as they look to challenge the ruling BJP in Uttar Pradesh.

The Lok Dal chief Jayant Chaudhary had earlier said that the SP has a credible base in Uttar Pradesh when asked about coalitions ahead of the polls which are seen as a precursor to the 2024 Lok Sabha elections.

Yadav had earlier said that his party’s alliance with the RLD is final and only sharing of seats is to be discussed.

The SP and RLD have contested assembly elections and Lok Sabha bypolls together since 2017.

Earlier before Akhilesh Yadav’s poll meeting with Jayant Chaudhary, the Samajwadi Party founder Mulayam Singh Yadav had called all the political parties to come together to counter the BJP on the issues of corruption, unemployment and inflation. If everyone is united then there will be development in the country, he said.

The Samajwadi Party (SP) leader also said that he was happy to see that everybody has gathered for the programme, keeping aside their political affiliations.

Speaking at a book launch, titled ‘Rajniti ke us Paar’, a compilation of works of party general secretary Professor Ram Gopal Yadav and other socialist leaders, the SP founder said he was happy to see that everybody has gathered for the programme, keeping aside their political affiliations.

Addressing a poll rally at Kanpur, the Uttar Pradesh Chief Minister Yogi Adityanath took a jibe at those protesting against the Citizenship Amendment Act (CAA). Warning those who are provoking feelings in the name of CAA, he said if these preachers of Abba Jaan and Chacha Jaan will try to do the same then the state government knows how to handle it.