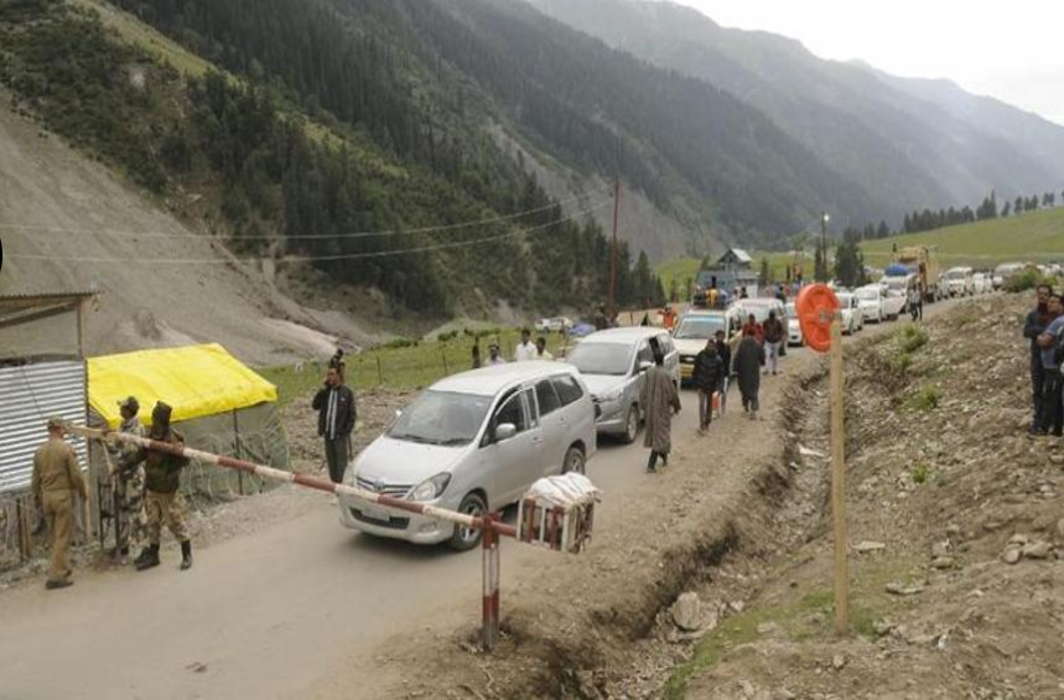 Paramilitary soldiers stand guard at Amarnath base camp in Sonmarg.

The annual Amarnath Yatra which began on Wednesday, has been put on hold due to bad weather. The heavy rainfall made the tracks slippery and increased the chances of a landslide at certain places.

According to reports, the Yatris, the devotees, left in two groups. The first group left Bhagwati Nagar Yatri Niwas at 3.55 am in an escorted convoy for Baltal base camp and the other group left at 4.20 am for Pahalgam base camp. The second batch comprises of 3,425 pilgrims includes 2,679 males, 592 females, three children and 151 Sadhus.

Due to low visibility Jammu and Kashmir Governor NN Vohra could not reach the venue for flagging off the Yatra. On Wednesday, the weatherman had predicted occasional rain and thundershowers along both the Baltal and Pahalgam routes to the cave shrine. The Meteorological Department has also informed that the weather will remain cloudy for next two days.

The journey for the second batch of pilgrims has been briefly halted and they have been asked to stay inside their base camps.

With a heightened terror threat perception to Amarnath yatra, the home ministry has decided to take unprecedented security measures. All vehicles carrying Amarnath pilgrims are advised to be equipped with Radio-frequency identification (RFID), which can help to protect pilgrims during the 60-day pilgrimage to the holy cave in Jammu & Kashmir. The 60-day long Amarnath Yatra will end on August 26, coinciding with Raksha Bandhan festival.

Unprecedented security measures are taken by the agencies. Approximately 40,000 security personnel from the Jammu and Kashmir Police, paramilitary, National Disaster Response Force (NDRF) and the Army have been deployed.

“Yatra control rooms have been established in Nunwan and Baltal base camp and the pilgrims will only be allowed to proceed towards the cave shrine after obtaining the latest weather update from the meteorological stations set up at the base camps,” an official at the Baltal base camp told Greater Kashmir.

The Amarnath cave shrine is situated in a narrow gorge at the farther end of Lidder valley in south Kashmir.  So far, 1.5 lakh people have registered for undertaking the arduous pilgrimage. A total of 2.60 lakh pilgrims offered prayers at the shrine last year.