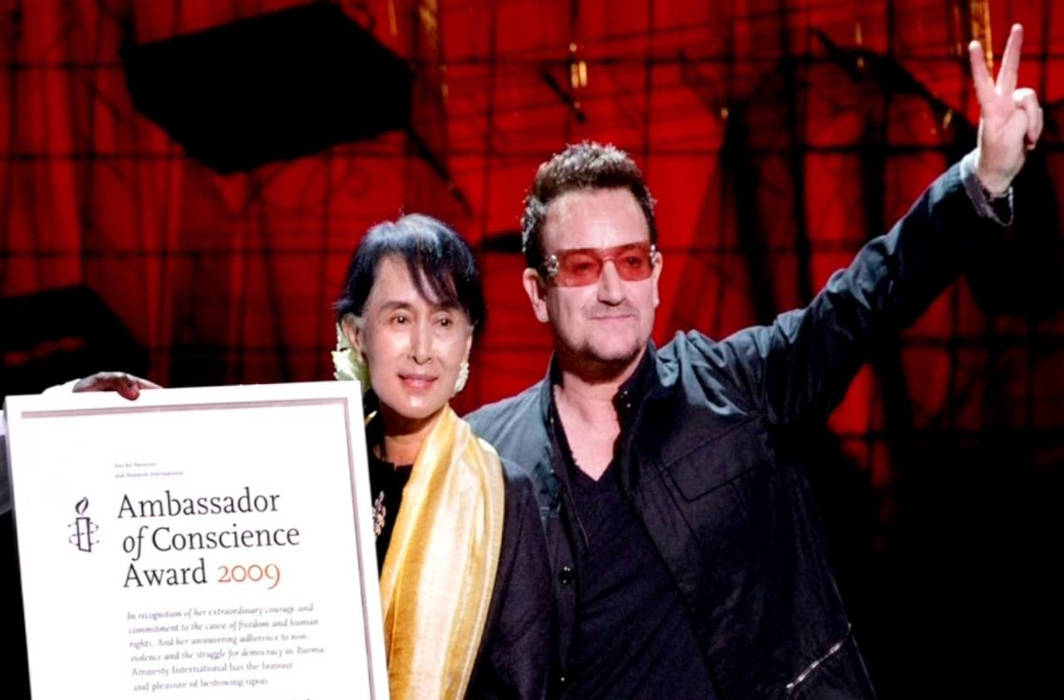 Amnesty International has withdrawn its highest honour ‘Ambassador of Conscience’ from Myanmar’s leader Aung San Suu Kyi in light of what it said was the Nobel Peace Prize laureate’s “shameful betrayal of the values she once stood for.”

This is the latest in a string of awards the 1991 Nobel Peace Prize winner lost since Myanmar’s military drove 720,000 Rohingya out of the Buddhist majority country in what the United Nations has called an act of genocide.

Amnesty International announced Monday, Nov 12, that its secretary general, Kumi Naidoo, informed Suu Kyi that it was revoking the award it gave her in 2009 “in recognition of her peaceful and non-violent struggle for democracy and human rights” while she was still under house arrest.

Amnesty said it was withdrawing the award “with great sadness” because of Suu Kyi’s “apparent indifference to atrocities committed by the Myanmar military and increasing intolerance of freedom of expression”.

Amnesty has criticized the failure of Suu Kyi and her government to speak out about military atrocities against the Rohingya Muslim population.

Naidoo said in a letter to Ms Suu Kyi: “Our expectation was that you would continue to use your moral authority to speak out against injustice wherever you saw it, not least within Myanmar itself. Today, we are profoundly dismayed that you no longer represent a symbol of hope, courage, and the undying defence of human rights.”

He continued: “Amnesty International cannot justify your continued status as a recipient of the Ambassador of Conscience award and so with great sadness we are hereby withdrawing it from you.”

Amnesty said it informed the 73-year-old of the decision on Sunday. She has so far issued no public response.

Suu Kyi was globally hailed as a freedom fighter who stood up to her country’s feared military junta while spending 15 years under house arrest. Her plight received added attention when she was visited by Hillary Clinton when the two-time US presidential candidate was still Secretary of State in 2011.

Suu Kyi then reaffirmed her commitment to working with the United States to bring democracy to her country of around 50 million people.

Her National League for Democracy (NLD) party swept to power in a 2015 landslide that brought hope of Myanmar correcting injustices inflicted over 50 years of brutal military rule. But her tenure has been marred by a failure to speak up for Rohingya Muslims. Her government is also fighting an uphill struggle against corruption and local conflicts.

Since a fresh wave of violence began last year, the security forces are accused of having killed thousands, raping women and girls, detaining and torturing men and boys, and razing hundreds of homes to the ground in what a UN fact-finding mission has called it a textbook example of ethnic cleansing.

More than 720,000 Rohingya have fled over the border to Bangladesh, but the government there have since struck a deal with Myanmar to send them back.

Naidoo wrote: “Aung San Suu Kyi’s failure to speak out for the Rohingya is one reason why we can no longer justify her status as an Ambassador of Conscience.

“Without acknowledgement of the horrific crimes against the community, it is hard to see how the government can take steps to protect them from future atrocities.”

Amnesty said it believes thousands of Rohingyas were killed in Myanmar’s western Rakhine province since the campaign began August 2017. Many more are thought to have been either tortured and raped.

Myanmar has justified the military’s actions as necessary to combat terrorism.

Amnesty conceded that the civilian government Suu Kyi informally heads does not directly control the powerful security services. But it accused her of standing up for the crimes and obstructing international investigations into abuses.

It added that human rights campaigners and journalists continued to be detained and intimidated by the government since her party’s victory.

Last month, Suu Kyi was stripped of her honourary Canadian citizenship over her failure to speak up for the Rohingyas. She has also been stripped of the US Holocaust Museum’s Elie Weisel award and Freedom of the City awards, which were withdrawn by Dublin, Edinburgh, Oxford, Glasgow and Newcastle.

Facebook
Twitter
Pinterest
WhatsApp
Previous articleSupreme Court to hear Zakia Jafri’s petition against clean chit to Modi in 2002 riots
Next articleRIP Stan Lee: The man behind the world of superheroes