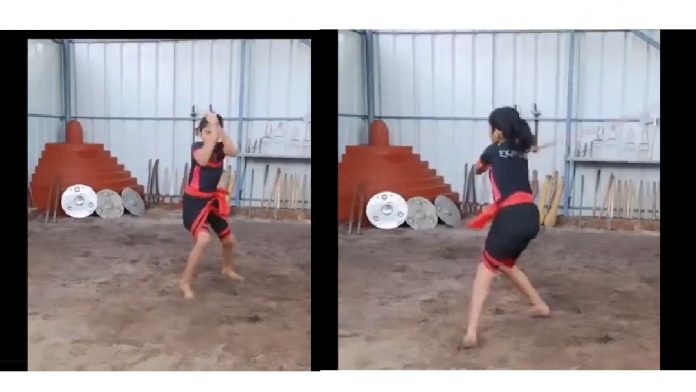 Industrialist Anand Mahindra is an avid user of social media and his Twitter account is proof of it. Recently, he shared a video in which a kid was practising Kalaripayattu. However, he did a mistake by misidentifying the gender of the kid and was immediately corrected by the kid in the video himself.

Anand Mahindra shared the video with the caption in which he raised a Warning that no one should get in the way of this young woman. He further wrote that Kalaripayattu needs to be given a significant share of the limelight in our sporting priorities. He concluded by saying that this can and will catch the world’s attention.

The kid in the video is Neelakandan Nair, who is a student of the Ekaveera Kalaripayattu Academy in Kerala. The video also caught the attention of Neelakandan, and he came forward to correct the error of Anand Mahindra and said that Thanks a lot for your support and encouragement sir, but I am not a girl, I am a ten-year-old boy. He further said that I am growing my hair long for a role in a planned short movie on Kalaripayattu.

As soon as the tycoon shared the video, it went viral and has so far crossed 290K views, at the time of writing this article. Several users applauded the kid for practising Kalaripayattu flawlessly.

After the boy replied to Anand Mahindra, people started applauding him. One of the users said that you have amazing talent, keep it up. Another user said that you and your talent is amazing even the words fell short to praise your dedication and talent. Yet another said that mujhey to tu ab bhi ladki lag raha (you still look like a girl to me), thanks for correcting.

Kalaripayattu is a martial art from Kerala and designed for the ancient and medieval battlefield. In this, weapons like daggers, sticks and swords are used. As are grips and sensitive touches to the nadi that can immobilize the rival assailant, like seen in the film Hindustani starring Kamal Haasan. (Pardon us for the overacting.)

Electronic music producer, Udyan Sagar aka Nucleya, is best known for his hit albums such as Bass Rani and Raja Baja turning 42 on December 7, this year.
Read more
Load more