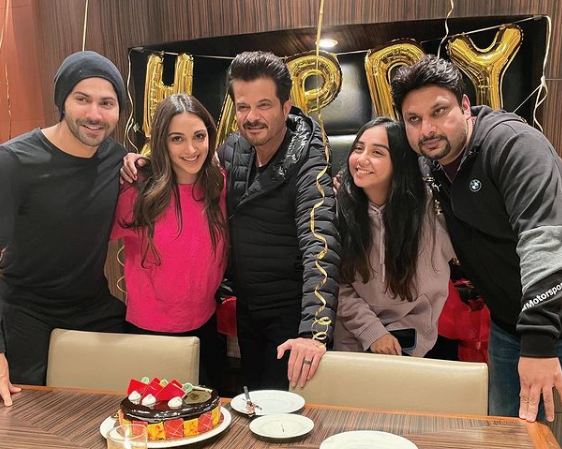 Actor Anil Kapoor celebrated his 64th birthday on the sets of Jugg Jug Jeeyo with his co-stars Varun Dhawan, Kiara Advani in Chandigarh on Thursday. His wife Sunita Kapoor also joined the celebration.

The pictures and videos from the celebration have been doing the rounds on social media. Actor Kiara Advani has also shared the glimpses of the special day on her Instagram stories, wishing the senior actor on his birthday.

In the video, Kapoor can be seen cutting cake in presence of his beloved wife Sunita and the team of his upcoming film. Besides Varun and Kiara, director Raj Mehta, Influencer turned actor Prajakta Kohli also became part of the birthday celebration.

Though Anil Kapoor’s daughter and actor Sonam Kapoor Ahuja is currently in London, yet she made the day special for him. She called Kapoor the most positive, kind and liberal human being in her birthday post on Instagram.On behalf of her sister Rhea and brother Harshavardhan, she said we are blessed to have his values instilled in us.Sonam also posted a beautiful photo of herself with Kapoor in which they are all smiles for the camera.

Kapoor has been a part of Hindi cinema for more than three decades.In the long span of his career, he has given hits like Mr India, Tezaab, Beta, Laadla. Even now his popularity has not faded, and the actor has continued displaying his acting prowess in films like Fanney Khan, Total Dhamaal, Ek Ladki Ko Dekha Toh Aisa Laga among others.

Read Also: Ranbir Kapoor says he, Alia Bhatt would have been married if not for the pandemic

Facebook
Twitter
Pinterest
WhatsApp
Linkedin
ReddIt
Tumblr
Telegram
Mix
Previous articleRanbir Kapoor says he, Alia Bhatt would have been married if not for the pandemic
Next articleSunil Gavaskar takes a dig at Virat Kohli’s paternity leave, says there are different rules for different players