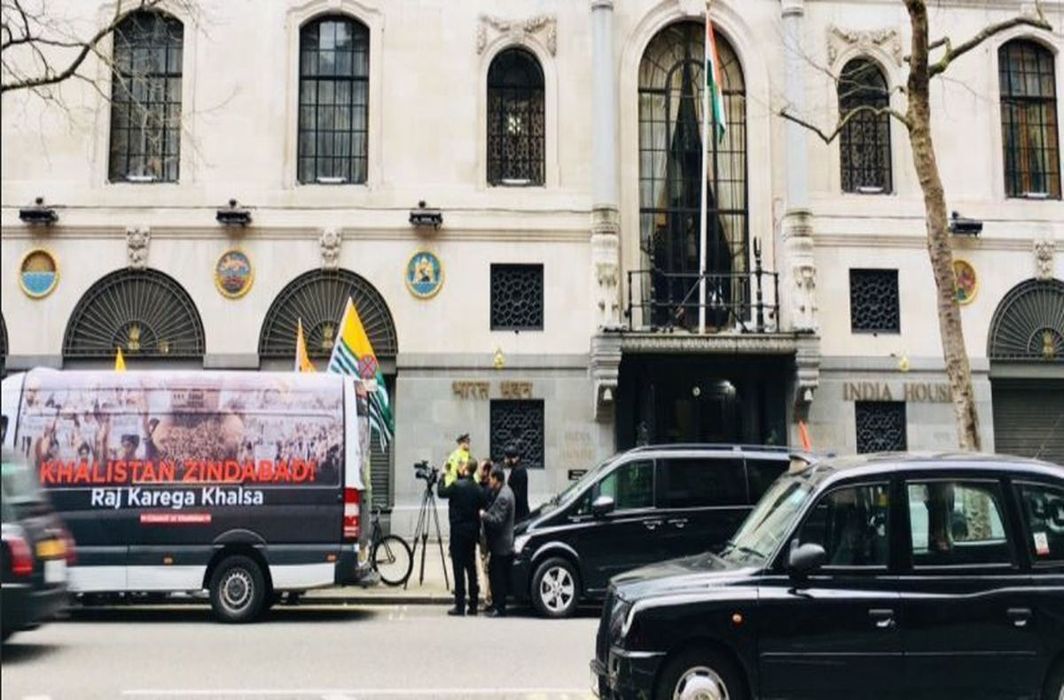 People from India and Pakistan clashed in front of Indian High Commission in London on Friday when Lord Nazir Ahmed, a Pakistani origin politician organised a “black day” protest demanding “freedom of Kashmir and Khalistan” while people of  Indian origin shouted slogans against Lord Nazir for his anti-India campaign on the occasion of 69th Republic Day.

According to reports, Lord Nazir Ahmed called his supporters to protest to highlight the “oppression of India”. It turned turned violent when Ahmed’s supporters were countered by many Indian and British groups. They questioned Lord Nazir on how he was making a mockery of the British system by openly playing Pakistan’s game.

The protesters were seen with billboard vans with slogans like: “India Leave Kashmir, Free Kashmir, Khalistan Zindabad” and “70 Years of Indian Brutality”.

One of the Indian activists was quoted saying, “I am here today to tell Lord Nazir that they are asking for independence for my state of J&K but I want freedom from Pakistan sponsored terrorism, ceasefire violations and their proxy war.”

Meanwhile the Indian High Commission has branded the protest as a “desperate attempt by a disgraced politician”. Lord Nazirm, a highly controversial figure with a string of scandals, was ousted from the Labour Party for his anti-Semitic views.

The Scotland Yard (police) officers had to intervene after scuffles broke out between the two sides. Protesters from both sides were shouting slogans and insults at each other.

Both sides shouted slogans against each other. Lord Nazir Ahmed’s supporters were shouting “Free Kashmir and Free Khalistan,”  and “RSS terrorists,”  while pro India protesters were heard shouting  “Vande Mataram, and Modi! Modi!”

On Thursday Lord Nazir was quoted saying, “Not only us [residents of Pakistan-occupied Kashmir], but Khalistanis, and our brothers from Nagaland and Manipur, and minorities, who are oppressed in India, will also join us in the protest. It will be a peaceful demonstration by a small gathering because we cannot have very large numbers outside the High Commission.”

Anti-India protest is organised in front of the Indian High Commission on Republic Day every year.  But on Friday, Indian flag was torn by hand and shredded underfoot.

Jayu Shah of Friends of India Society International, one of the organisers of the counter protest said that they had learnt the significance of counter protests during the November 2016 visit of Prime Minister Narendra Modi, when two groups congregated outside Downing Street. “From now on we have to be vocal.”

Some London based media reported said that Lord Ahmed told the journalists that the vans with anti India slogans would travel to other areas with a large Indian diaspora, including Birmingham, and Manchester, and would continue until Prime Minister Narendra Modi’s visit to Britain in April.

Lord Ahmed said, “We want to tell people that this so called democracy that they are celebrating are actually an expansion of Hindutva.”  He also drawn a parallel between the treatment of minorities in India and under Hitler.

India had earlier expressed its concerns through a note verbale to the British Foreign Office about the use of government and public property by anti-India groups and had been given assurances that forums such as London taxis or buses or billboards on public property could not be used to promote such messages.

Responding to India’s concern earlier this year, Birmingham Council withdrew permission for a rally on the death anniversary of Burhan Wani, the commander of  Hizbul Mujahideen, who was killed by Indian forces in July last year.

Lord Nazir Ahmed was born in 1957 in Pakistan occupied Kashmir (PoK). His parents moved to UK while he was 11. He joined Labour Party at the age of 18. He was appointed to the House of Lords in August 1998. He was suspended from Labour Party following allegations of his anti-semitism.