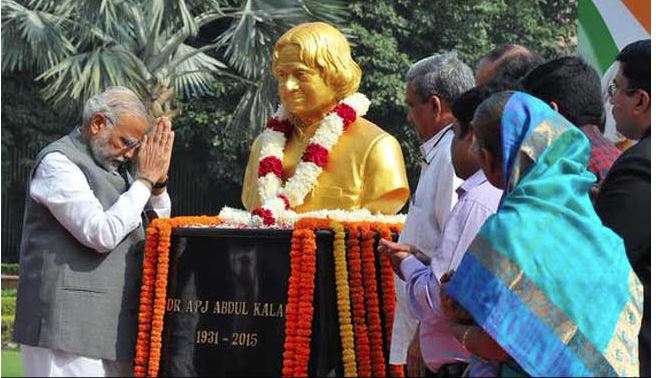 Prime Minister Narendra Modi on Thursday paid tribute to former President and scientist Dr APJ Abdul Kalam on his 89th birth anniversary.Popularly known as India’s missile man, Kalam is being remembered by various political leaders, celebrities and public figures for his contribution to the country.

He worked with the Indian Space Research Organisation (ISRO) and Defence Research and Development Organisation (DRDO)  as a scientist before becoming the 11th President of the country. Kalam’s birth anniversary is also celebrated as Student’s Day in the country with this year’s theme being, “Learning for People, Planet and Prosperity”.

Praising the scientist, the Prime Minister wrote that India can never forget his indelible contribution towards national development.He posted a beautiful video and famous quotes of Dr Kalam.

Union Home Minister Amit Shah remembered Kalam as a visionary leader and architect of India’s space and missile programmes.His immortal legacy is an epitome of inspiration, he wrote.

In tribute to the former President, Railway Minister Piyush Goyal said Kalam’s ideas will keep inspiring the youth for generations to come.

Union Minister Ravi Shankar Prasad also paid tribute to Kalam. He described him as a great teacher and eminent scientist.

The Congress party posted a heartfelt tribute to Kalam.They praised his remarkable vision and unyielding passion for the progress of the country.

Born on October15,1931 in Tamil Nadu, Avul Pakir Jainulabdeen Abdul Kalam also headed the Integrated Guided Missile Development Programme. He developed missiles like Prithvi and Agni. For his work in the field of science and administration, he was awarded the highest civilian honour of Bharat Ratna.

Kalam breathed his last on July 27, 2015. He collapsed while delivering a lecture at Indian Institute of Management Shillong and died from a cardiac arrest.