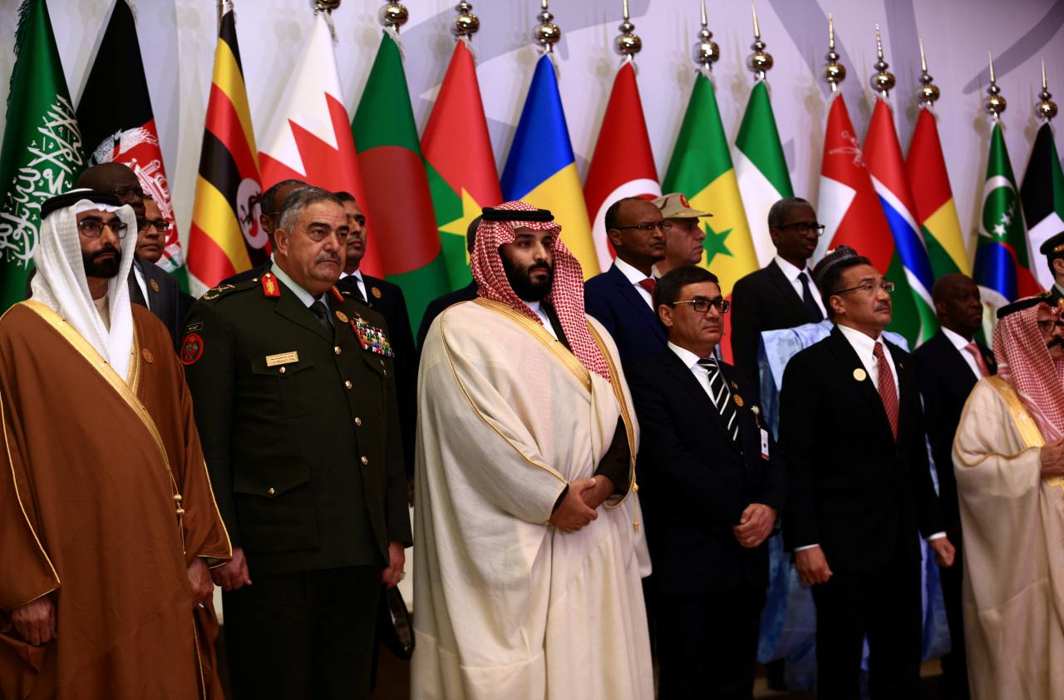 The rift between the policies of Saudi Arabia and Arabs on the streets was visible on Monday when Palestinians and Arab people from different countries expressed their anger for screening of video having scene of a Palestinian fighting Israeli occupation.

Crown Prince Mohammed bin Salman is currently in a hurry to strip Iran off its support base for its policies towards Israel-Palestine issue. He headed the summit of the Islamic Coalition Against Terrorism in Riyadh on Sunday and Monday with participation of Defence Ministers and other senior officials from 40 member countries.

Qatar did not attend the summit. Saudi Arabia, Bahrain, UAE and Egypt had suddenly severed their diplomatic ties accusing Qatar of supporting terrorism. The quartet wanted Qatar to downgrade its ties with Iran, shut down Al-Jazeera network and close Turkish military base in its territory.

“This image from the video that was shown in the opening session of the ‘Council of ministers of defense of the Islamic Coalition to Combat Terrorism’ in Saudi Arabia is from 2001 and is a Palestinian resistance fighter clashing with the occupation army in the south of occupied Jerusalem al-Quds. To those who are hurrying to normalize with the occupation, it was and will always be: resistance is not terrorism,” said one twitter user.

“This is resistance and the highest degree of honor and dignity, which you lack. Terrorism is what you have carried out against your oppressed people for decades,” another tweeted.

“People do not care what your criteria for classifying terrorism is. Terrorism is all who normalize with Israel. Palestinian resistance has more honor than you,” says one such twitter user.

On November 14, a Lebanese newspaper al-Akhbar daily published a secret letter from Foreign Minister Adel al-Jubeir to Crown Prince Mohammed bin Salman placing a proposal to normalize ties with Israel despite “risks” of a public backlash. Jubeir referred Israel as a “state” despite Riyadh and many other regional countries do not recognise Israel as country.

Defence Ministers and other senior officials from the Islamic Military Counter Terrorism Coalition alliance held its first ever two meeting on 26-27 November in Riyadh.

Crown Prince Mohammed bin Salman said that meeting was a “clear signal” to extremism. According to him, “In past years, terrorism has been functioning in all of our countries…with no coordination” among them. He further said “this ends today, with this alliance.”

The alliance was established in 2015 under the auspices of Prince Mohammed, who was appointed as Crown Prince in June this year shaking the whole region. The alliance does not include Iran, Syria and Iraq.

The people in most Arab countries generally do not have right to discuss politics and express dissent against their respective governments. However, generally people envy Iran’s progress after 1979 revolution and support its world view including support to Palestinians.