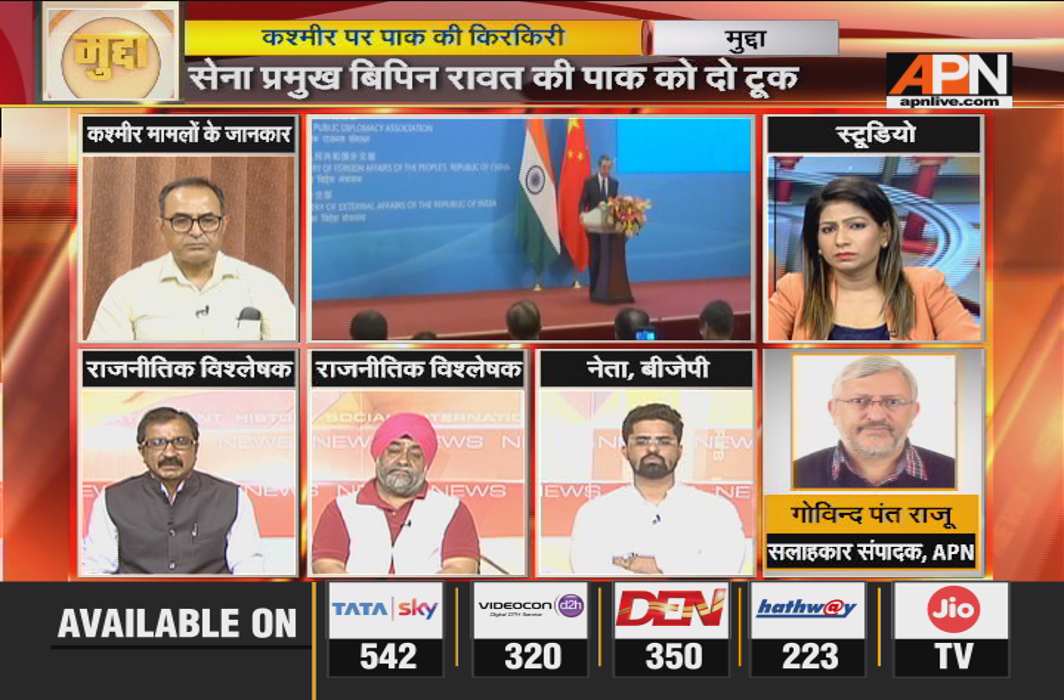 Panelists say that government should also hear out opposition arguments

Tyagi said: “Pakistan has been isolated. Pakistan has been taking the begging bowl all over internationally. They have been saying Art 370 is unconstitutional. India is not scared of China, or anyone else. Pakistan propaganda is all false.”

Kaushik said; “No third party mediation is required. Why is Pakistan readying it’s military? It is getting desperate, trying to find common ground with China. We have taken the decision on our internal matter.”

Singh said: “The BJP has got a huge mandate and has taken this decision. I will tell the Opposition to stand with the government on this issue. Decision has been taken by a party that has a huge mandate. The weak person always gets desperate. We should stick to the government line and the government should be mindful of people’s wishes. This mandate is not indefinite. Art 370 was a part-time move. International countries are still studying the matter. We should maintain the peace meanwhile.”

Raina said: “A strong message has gone to the international community. Till now we had been given to understand that the scrapping of Art 370 would be akin to dropping the bombshell. Opposition should make itself aware of the ground reality. Why should leaders be saying that had Kashmir been a Hindu majority state, Art 370 would not have been scrapped? We have seen the ethnic cleansing in reality. Many communities that are non-Muslim were never involved in the democracy process in Kashmir in reality. Opposition should be aware of this dimension. Now Indians get to see what is the real narrative. This is a battle of narratives, a battle of perceptions.”

Raju said: “US has said that this is India’s internal matter. Pakistan itself is declaring that it’s been isolated. “

Kaushik said: “Pakistan needs to worry about its internal politics.”

Raina said: “Today’s opposition has been in government for 50 years. What did they do earlier?“

Tyagi said: “It’s only a handful of people why want to destroy the peace. Opposition leaders, even such a tall leader like Chidambaram, what’s he saying? Nehru had said Art 370 would get obliterated gradually. Army jawans have been routinely getting killed in the Valley. Punjab’s Valmiki people didn’t get justice, now the situation is getting better. Whatever is needed to bring peace will be done. When Kashmiri Pandits were thrown out, the Opposition was mum, now internet service are cut in the Valley for the sake of peace, there’s a problem.”

Tyagi said : “When we make our comparison, we will do so with the previous governments, not with the governments of some international countries. The issue is that the Opposition has no more mudda left.”

Singh said: “You also had the opportunity earlier too.”

Tyagi said:” Vajpayee had said he did not have the kind of mandate he would have liked to have to scrap Art 370. NC and PDP will never want to scrap 370. If this decision was unconstitutional, US and may other international countries would have been in the picture by now.”