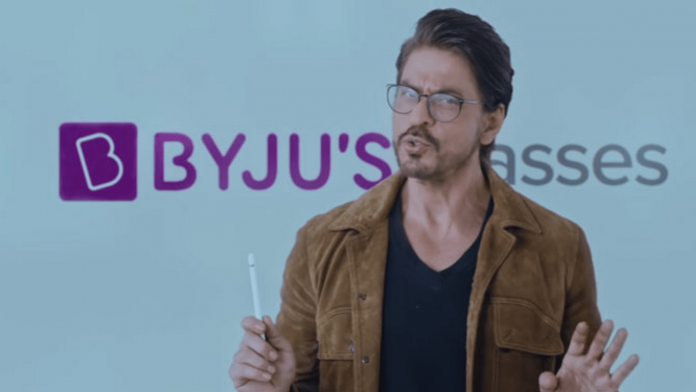 As per reports EdTech platform Byju’s has stopped all their ads featuring Bollywood star Shah rukh Khan after the arrest of his son Aryan Khan in a drugs case. Shah rukh Khan has been the brand ambassador of the BYJU’s for more than 4-years. According to a report, BYJU’s had to take the tough call after the company came under fire on all social media platforms. Some social media users claimed that endorsing an education platform by someone who can’t teach his own kid to act lawfully, will impact their image badly. However, BYJU’s has not issued any statement regarding the matter.

Shah Rukh and his family are facing the toughest time of their life, though fans are showering their full support to the megastar. SRK has also called of all his upcoming projects to be with his family in Mumbai. Earlier on Friday, Shah Rukh’s son Aryan Khan, who was arrested on October 3, was denied the bail by a local court in Mumbai and was sent to the judicial custody for the next 14 days.

Aryan Khan along with seven others, was arrested by the Narcotics Control Bureau (NCB), after a raid on cruise ship. The raids were conducted by NCB officials, the NCB team seized 13 grams of cocaine, 21 grams of Hashish, 22 pills of MDMA and 5 grams of MD.

A report from Economic Times says, BYJU’s have paused all SRK related promotions for now, as the company didn’t want to involve in all ongoing controversies.

Not only BYJU’s but SRK is also the face of big brands like Hyundai, LG, Dubai Tourism, ICICI Bank, Reliance Jio. Reportedly, the education company has the biggest sponsorship deal with the superstar, he was paid nearly Rs 3-4 crore per year for the endorsement.

BYJU’s came under the radar on all social media platforms, including Twitter. Here are some of the tweets urging BYJu’s to remove SRK from the platform.

Indian Institute of Management, Ahmedabad (IIM) has published the answer key for Common Admission Test (CAT) 2021 today on December 8, 2021. At iimcat.ac.in, candidates who took the IIM CAT can access and get the answer key.
Read more
Load more