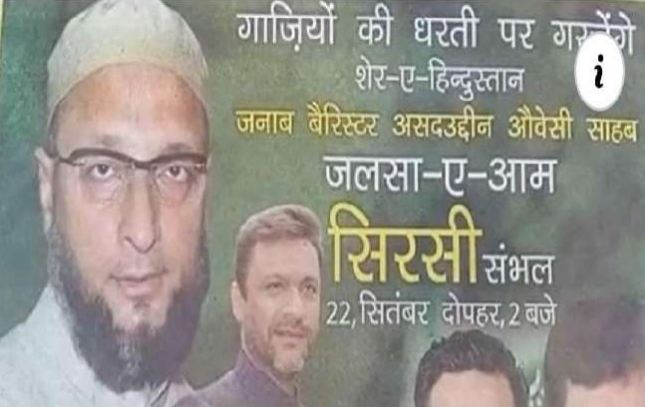 A controversy erupted on Wednesday over a poster describing the Sambhal as the land of Ghazi’s before the start of AIMIM chief Asaduddin Owaisi’s public meeting in Sirsi area of Sambhal district of Uttar Pradesh.

The BJP has strongly objected to the poster which described Sambhal as the land of Ghazi’s (the land of brave warriors of Islam), however, the posters have been removed before Owaisi’s public meeting.

Reacting to the posters, BJP’s regional vice president Rajesh Singhal said that Sambhal has never been the land of Ghazis. Claiming Sambhal a mythological city, he said no city in India has belonged to the Ghazis.

He also claimed that there is a mention of Kalki Avatar about Sambhal in Hindu Puranas. If Sambhal is described in the holy Quran as the land of Ghazis, then he will leave politics, he said.

The development comes a day after Owaisi’s Delhi residence were vandalised by the Hindu Sena. The attack took place around 5 pm on Tuesday when he was in Lucknow where he met former Samajwadi Party leader and Pragatisheel Samajwadi Party (Lohia) chief Shivpal Yadav.

On Tuesday, the Delhi Police arrested five members of the Hindu Sena for allegedly vandalising the official residence of the Hyderabad MP at Ashoka Road in Delhi.

Several videos of Hindu Sena leaders are still rounding on social media. In a video, the Hindu Sena president Lalit Kumar said that the Sena went to Owaisi’s residence to teach him a lesson as he speaks against Hindus at his rallies.

Read Also: Yogi Adityanath says if someone plays with women’s dignity he will meet same fate as Duryodhana, Dushashana

Earlier this month, the AIMIM chief Asaduddin Owaisi had faced immense criticism from the BJP, Hindu right wing outfits and some seers for referring Ayodhya district as Faizabad in its posters ahead of his visit to the district.

The AIMIM has decided to contest on 100 seats in the next year’s assembly elections in Uttar Pradesh.

In the wake of next year’s assembly elections in Uttar Pradesh, the MIM chief Asaduddin Owaisi is actively holding public meetings in the poll bound state.