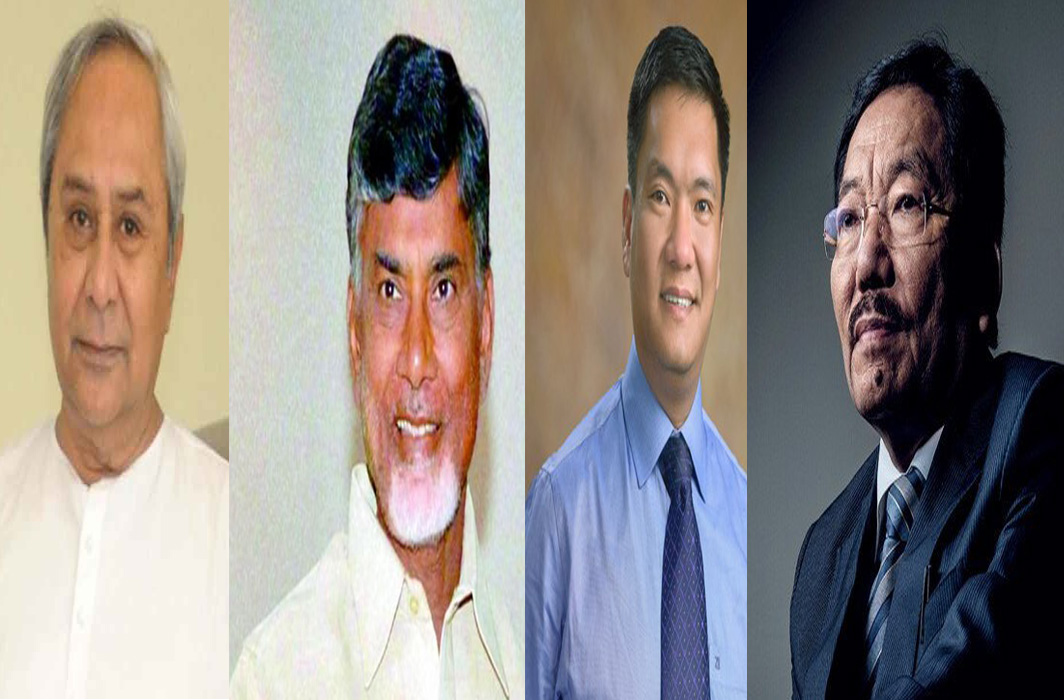 In two of the major upsets in elections to four state assemblies, Telugu Desam Party of N Chandrababu Naidu has been ousted from Andhra Pradesh while in Sikkim, Pawan Kumar Chamling of Sikkim Democratic Front is set to lose power for the first time since 1994.

Meanwhile, the faction-ridden Congress-JD(S) coalition government in Karnataka was in trouble with the BJP sweeping the state. The BJP was ahead in 24 of the state’s 28 Lok Sabha seats, restricting Congress and JD-S to only four with even JD-S patriarch HD Deve Gowda staring at a defeat. A meeting of JD(S) leaders was going on at the residence of party chief HD Deve Gowda in Bengaluru, reported ANI.

As the early trends gave a clear majority to YSRCP in the Andhra Pradesh Assembly elections and also the Lok Sabha elections, Chief Minister Chandrababu Naidu is likely to resign in the evening today.

Chandrababu Naidu is expected to submit his resignation to the Governor around 5 pm today.

Jaganmohan Reddy is likely to take oath as the next chief minister of Andhra Pradesh on May 30.

Among the 176 Andhra Pradesh Assembly seats, Jaganmohan Reddy’s YSRCP is leading in a whopping 149 seats while the ruling Telugu Desam Party (TDP) is leading in only 24 seats.

Meanwhile, the supporters of Jaganmohan Reddy have already printed a nameplate for him with chief minister written under his name.

Congratulations on the remarkable win in Andhra Pradesh. Best wishes to you for a successful tenure.

Former chief minister Gegong Apang, who gave BJP its first government in the North East 16 years ago but quit the party in January this year, is leading from the Tuting-Yingkiong Assembly constituency. He has remained chief minister of the state for 23 years. Apang is part of the Janata Dal(Secular) at present and is ahead of Alo Libang of the BJP by a thin margin of 99 votes.

In Doimukh Assembly constituency, Tana Hali Tara of the BJP defeated Nabam Vivek of the National People’s Party by 2,385 votes. In the 2019 Arunachal Pradesh Assembly elections, Doimukh recorded a voter turnout of 72.55%. Doimukh is an falls in Papumpare district. The seat is reserved for Scheduled Tribe.

Official results are slowly trickling out from Arunachal Pradesh. In the Namsang Assembly constituency, Wangki Lowang of the BJP defeated Ngonglin Boi of the Janata Dal(United) by a margin of 1,682 votes. In the Nari-Koyu Assembly seat, Kento Rina of the BJP pipped Tojir Kadu of the Congress by a small

Counting is going slow due to tallying of the VVPAT with the EVMs. After 6 rounds of counting, I'm leading by more than 80,000 votes from Arunachal-West lok Sabha seat. BJP is also heading towards landslide victory in the State Assembly election in Arunachal Pradesh. pic.twitter.com/JVeCLKhqiG

Odisha Chief Minister Naveen Patnaik is leading both of his MLA seats-Hinjili and Bijepur. He is leading with 9815 votes in Honjili and 11,795 in Bijepur seat. For the first time in his political history, Naveen contested from two seats. He is usually contesting from Hinjili seat but this time, he also stands from Bijepur in western Odisha as his party has witnessed a drastic shortfall of vote percentage in the rural polls in 2017 against BJP.

Congratulations to Naveen Babu for yet another victory in Odisha. Wishing
him the very best for the next term.

Sikkim Incumbent Chief Minister Pawan Chamling is leading both in Namchi-singhithang and Poklok-kamrang by 146 and 2,774 votes respectively. In Namchi-singhithang, he is leading against Sikkim Krantikari Morcha’s Ganesh Rai while in Poklok-kamrang he is ahead of Kharka Bahadur Rai of the same party. Chamling is head of Sikkim Democratic Front and also the longest serving chief minister in the country.

Often derided for his strong arm tactics, Pawan Kumar Chamling’s Sikkim Democratic Front (SDF) has ruled Sikkim virtually uncontested and unquestioned for a much larger part of his 25 years in power. In 2014, SDF bagged 22 of the state’s 32 total seats in the legislative Assembly. But the million-dollar question is will he again sit on that coveted chief minister’s chair after 23 May?

As per the latest trends, challenger Sikkim Krantikari Morcha (SKM) is ahead of the ruling Sikkim Democratic Front (SDF) in seven seats in the Sikkim assembly polls.

SDF, which is facing a strong anti-incumbent, is ahead only in three seats so far. SKM would need 17 seats to have a simple majority.

The Sikkim Democratic Front (SDF) chief and state chief minister Pawan Kumar Chamling. Chamling was seeking re-election for the fifth term. Appearing at the dinner meeting of BJP national president Amit Shah on May 21 in New Delhi, Chamling seemed confident of returning to power even though his party this time had to face an uphill task against the odds mounted by a strong contender, the SKM.

While in the 2009 assembly polls, SDF could win in all the 32 seats, in 2014 though, it came as a shocker to the party when a new entrant, the SKM, wrested ten seats from it. SKM could make it possible not only by eroding nearly 11% vote share of the SDF but also took away almost the entire vote share of the Congress, which was 27.09% in the 2009 assembly elections. In the 2014 assembly polls, SKM recorded 40.8% of the state’s vote share. Aside from Tripura, Sikkim is another northeastern state where the Congress had lost a considerable percentage of its vote share to another party.

The Sikkim assembly also has a seat reserved for the state’s monks. The Sangha assembly seat has no physical jurisdiction but an MLA is elected by the monks registered with the state’s 51 monasteries. As per the state election office, 3,293 voters would elect the MLA from the Sangha seat. It also includes 69 nuns.

Keep yourself updated with the Lok Sabha Election Result 2019.