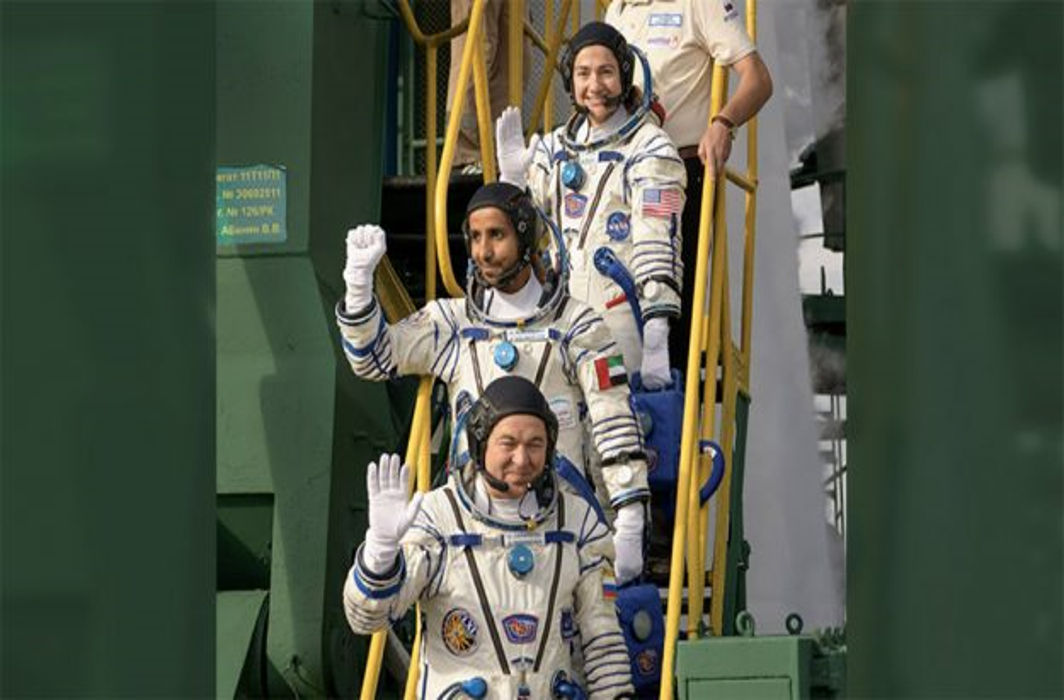 NASA astronaut Nick Hague and his two fellow passengers — Alexey Ovchinin of Roscosmos and Hazzaa Ali Almansoori of the United Arab Emirates returned to Earth aboard a Russian Soyuz crew capsule after being in space for over 200 days. They safely landed in Kazakhstan on Thursday, October 3, NASA reported.

.@AstroHague returned to Earth from the @Space_Station after completing a 203-day mission, spanning 3,248 orbits of Earth and a journey of 80.8 million miles. Learn more about his journey home alongside fellow crew members Alexey Ovchinin & @Astro_Hazzaa: https://t.co/iAnRKXOcj8 pic.twitter.com/kKKDYbDafR

📍 There’s no place like home! Mission teams confirmed that @AstroHague, Alexey Ovchinin and @Astro_Hazzaa landed safely at 6:59am ET after a mission to conduct science and maintenance aboard the @Space_Station. Coverage continues: https://t.co/vMxa9kWyuI pic.twitter.com/DhqgyYADmL

The space station has been remarkably crowded for the past week or so, with a total of nine passengers living and working in the orbiting laboratory. That’s a significant boost from the typical crew of six, but with the return of Hague, Ovchinin, and Ali Almansoori, the remaining ISS inhabitants can now dive into their work on Expedition 61.

Both Hague and Ovchinin were members of ISS Expedition 59 and 60, while Ali Almansoori had only arrived at the space station eight days ago on a brief mission to space. The Arab astronaut arrived on the space station alongside NASA’s Jessica Meir and Russia’s Oleg Skripochka, both of whom will be part of space station operations moving forward.

Nick took to twitter announcing his homecoming, “What an extraordinary journey! Part of what has made this experience so special was being here with my friends, classmates and our international partners. Thank you to all involved in the success of my mission on @Space_Station. I’m coming home.”

What an extraordinary journey! Part of what has made this experience so special was being here with my friends, classmates and our international partners. Thank you to all involved in the success of my mission on @Space_Station. I’m coming home🌎 pic.twitter.com/IGlvd4d2vA

This marks the end of a seriously dramatic year for both Hague and Ovchinin. The pair was originally slated to head to the space station back in late 2018, but the Soyuz rocket they were riding suffered a failure and the crew capsule had to make an emergency abort, landing back on Earth before it even left the atmosphere.

It was a scary moment for the duo but they made it back to solid ground in one piece. Their second attempt came in March of this year, and things went much more smoothly, with Hague, Ovchinin, and NASA’s Christina Koch arrives at the space station swiftly.

During Hague’s time in space, he performed a trio of spacewalks outside the International Space Station totally nearly 20 hours. He and NASA’s Andrew Morgan installed docking adapters for future commercial spacecraft to attach to the ISS. As a whole, the Expedition 59 and 60 crews completed hundreds of experiments, and Hague’s work will continue now that he’s back on solid ground.

Each time I open the door the views keep getting better. Congratulations to all involved in the successful execution of this #spacewalk. From our EVA and Robotics trainers to the teams down in Mission Control – The quality of our training is out of this world. pic.twitter.com/MSzKYs4YBk