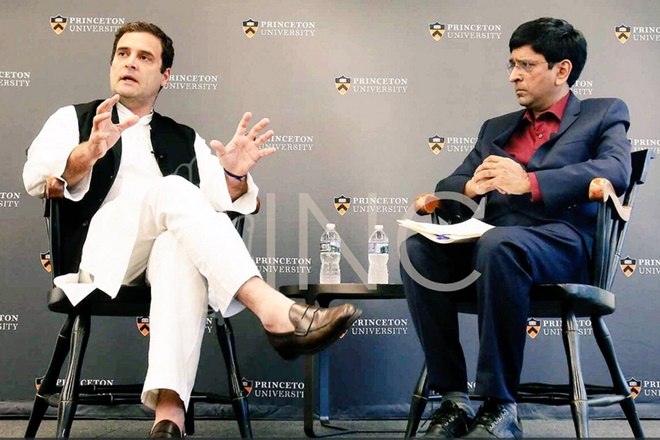 Days after he lashed out at Prime Minister Narendra Modi’s government on its failure to resuscitate India’s economy while addressing students at the University of California, Berkeley, Congress vice president Rahul Gandhi, on Tuesday, gave a back handed compliment to the Indian Premier over his Make-in-India campaign.

Interacting with students at the prestigious Princeton University’s Woodrow Wilson School in New Jersey, Gandhi conceded that he appreciated Modi’s Make-in-India initiative but promptly qualified his praise by asserting that the scheme wasn’t targeting the right sector of India’s economy.

“I like the Make-in-India concept but they are not targeting whom they should. My implementation and focus would be slightly different,” the Congress vice president said, while adding: “PM Modi feels large businesses should be targeted. I feel medium and small companies should be targeted. That is where the jobs are going to come from.”

In a rare display of the political intellect that he is seldom credited to have, Gandhi used Modi’s flagship scheme to highlight how even a good program could fail to achieve desired results if it targets the wrong sector.

Gandhi used the Make-in-India scheme to underscore the government’s failure in creating jobs – a major promise that Modi and his BJP had made during the Lok Sabha poll campaign in 2014 – and said that “there is anger building up in India right now” over the Centre’s inability in creating employment opportunities.

Gandhi sought to draw a parallel between the elevation of Modi and India’s Prime Minister and Donald Trump as President of the United States by asserting that the aspiration of the youth to get proper employment is what contributed in a big way to the meteoric political rise of the two leaders.

“I think the central reason why Modi arose and to an extent why Trump came, is the question of jobs in India and in the US. There is a large part of our population that simply does not have jobs and cannot see a future. And, so they are feeling pain and have supported these type of leaders.”

The Nehru-Gandhi scion who had attracted massive criticism from the BJP last week when he told students at Berkeley that India functions through its dynasts, chose to stay focused on issues related to job creation and aspirations of the youth during his interaction at Princeton.

Just as he had candidly admitted at UC, Berkeley that the Congress had become “arrogant” in 2012, Gandhi once again made an introspective remark, claiming that his party was “unable” to deliver on the front of creating employment but said that the same was now true of the Modi government.

The attack was in a way an escalation of what Gandhi had said at Berkeley a few days ago. “Currently, we are not producing enough jobs… 30,000 new youngsters are joining the job market every single day and yet the government is only creating 500 jobs a day. And this doesn’t include the massive pool of already unemployed youngsters,” Gandhi had said earlier.

On Tuesday, the Congress vice president added the facet of disenchantment among the youth against the Modi regime to his argument. “Those same people who got angry with us because we couldn’t deliver on those 30,000 jobs (a day) are going to get angry with Modi. The central question is resolving that problem. My main issue with Modi is that he diverts that issue and points the finger somewhere else instead of saying ‘listen we have a problem’,” Gandhi said.

The Congress vice president identified “the politics of polarisation” as a central challenge for India. “In the 21st century, if you leave some people out of your vision, you are asking for trouble. New ideas would come, new different visions would develop. So, to me, central challenge in India is politics of polarisation where you pit one community against other and you create spaces for other people to come in,” he said.

“There is a belt of 100 million tribal people who do not feel comfortable with the vision (of the BJP). There are a number of States in India, which don’t want a single vision forced down their throat. There are minority communities, they do not feel that they are the part of the vision. So that’s where the real danger is,” Gandhi added.