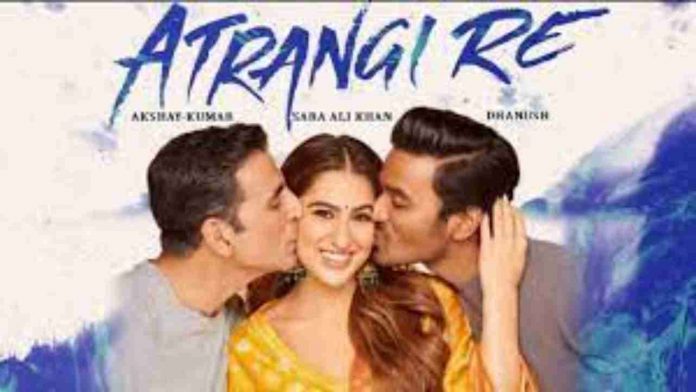 The much-awaited trailer of Anand L Rai’s film Atrangi Re is finally out on Wednesday, November 24. The comedy film starring Akshay Kumar, Sara Ali Khan, and Dhanush has already created a buzz ever since it was announced.

Atrangi Re is releasing this Christmas on the OTT platform Disney+Hotstar on December 24. The film has been scripted by Himanshu Sharma and produced by Bhushan Kumar’ T-Series, Cape of Good Films, and Colour Yellow Productions. The songs have been penned by Irshad Kamil and crooned by AR Rahman.

Atrangi Re trailer out

The rib-tickling trailer is 3-minute-long wherein Rinku (played by Sara Ali Khan) and Tamil guy Vishnu (played by Dhanush) is forced to get married to each other. Rinku family takes this step in order to get rid of Sara Ali Khan’s magician boyfriend Sajad (played by Akshay Kumar).

The love triangle begins when Akshay Kumar reappears in the second half on an elephant. Later, Rinku doesn’t want to choose between Sajad and Vishnu as she wants both men. Atrangi. Right?

In other news, Pakistani singer Arooj Aftab, who sang for Meghna Gulzar’s Talvar, has bagged two nominations at the prestigious awards for her popular song Mohabbat. Arooj has become the first Pakistani woman to be nominated for the Best New Artist award alongside The Kis Loroi, Olivia Rodrigo, Glass Animals, and others.