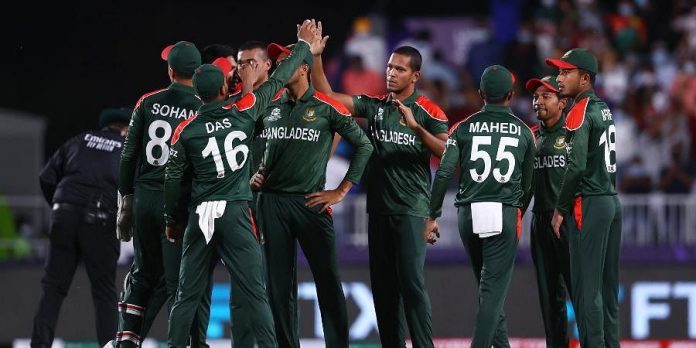 Bangladesh beat Papua New Guinea by 84 runs to qualify for super-12 of T20 World Cup 2021. With this win Bangladesh moved to the top of table in qualifying group B. Star all-rounder Shakib Al Hasan stole the show with his all-round performance.

Earlier on Sunday, when Bangladesh lost against Scotland in a qualifier match, it was very difficult for Bangladesh to qualify for the next round, as Oman also registered a big victory against Papua New Guinea. This was a must-win game for Bangladesh, else they would have been disqualified from the T20 World Cup 2021.

After opting to bat first, Bangladesh posted a massive total of 181 runs in 20 overs. Mahmudullah-led Bangladesh didn’t start well, as they lost their first wicket on the second ball of the innings, but Liton Das (29) and Shakib Al Hasan (46) took the responsibility and helped their team to get stabilize. Bangladeshi captain Mahmudullah also scored a crucial fifty and made sure his team to reach a massive total. While Kabua Morea, Damien Ravu and Assad Vala took 2 wickets each for Papua new Guinea.

Chasing the target Papua New Guinea never seemed to win the match, losing four wickets in the first 5 overs itself. Shakib Al Hasan, once again was the star on pitch, but this time with the ball. He took 4 wickets in his spell by giving just 9 runs.
For his match winning performance, Shakib Al Hasan was named player of the match.

If Bangladesh stays on top of the table, then they will land in Group-B of Super-12, in which India and Pakistan are already, or if Scotland manages to win against Oman then Bangladesh will move to group A, in which England, Australia and current champions West Indies are already there.