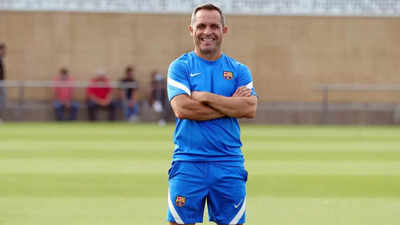 Football club Barcelona have appointed Sergi Barjuan as interim coach of the senior team, amidst the rumour of club legend Xavi Hernandez becoming the new manager of the team. Earlier today, club President Joan Laporta had sacked Ronald Koeman from his post, following a defeat against Rayo Vallecano on October 28.

Sergi Barjuan will take charge of the senior team from Thursday, confirmed Barcelona. Club President Joan Laporta will introduce the new manager to the first team before the Thursday afternoon training session at the Ciutat Esportiva.

Barjuan is currently serving as the coach of Barca-B, his interim position as first-team coach will end as soon as the club will hire a full-time head coach to replace the dismissed coach Ronald Koeman.

Sergi Barjuan, as the interim coach of the senior team, will be attending to the media tomorrow Thursday from 1.00 pm CEST in the press room at the Ciutat Esportiva to discuss the game against Alavés, with president Joan Laporta also appearing, confirmed Barcelona press release.

As per reports, Xavi will take over the job of Barca manager, once he completes the procedure to complete his termination from Qatar club Al-Sadd. Xavi has been managing the Qatari club for more than 3 years now.

As Al Sadd manager, Xavi has won the Sheikh Jassem Cup, two Qatar Crown Prince Cups, a Qatar Stars Cup, a Qatar League and two other Emir Cups during his two-and-a-half years in the Middle East.

Ever since the Barcelona legend Leo Messi has left the club, seems like Barca have been in some deep problems. Currently, the Spanish giants are sitting ninth in La Liga points table and third in their Champions League group. The club’s financial situation is also not good, as they are already in a huge debt of 1.35 billion euros and are not able to sign any players.