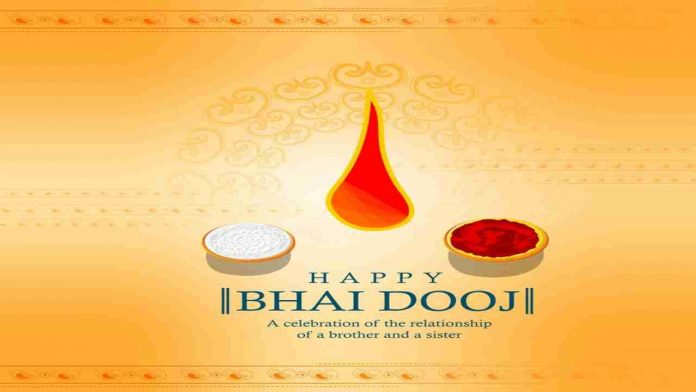 Bhai Dooj, a festival that shows a bond of love and affection between a brother and a sister, is observed on the second day of Shukla Paksha, which falls in the Hindu month of Kartik. Hindus are observing this festival today.

Bhai Dooj also known as Bhai Tika and Bhai Phonta is a festival celebrated on the last day of the five-day-long festival of Diwali. On Bhai Dooj, sisters perform the Teeka/Tilak ritual to pray for their brothers’ long and happy lives, and following the ceremony, brothers buy presents for their sisters.

The ritual is simple. The sister applies a tilak on the brother’s forehead and offers him, sweets. In exchange, the brothers give presents to the sisters. After the tilak, the flowers of kaddu (pumpkin), betel leaves, betel nut, and cash are often placed in the hand of the brother.

The ritual, however, may vary from region to region. In Nepal, for example, tilaks of seven different colours are used throughout the event. In Bengal, tilak is applied using sandalwood paste and kajal. Sisters who do not have a brother worship the moon in several parts of Maharashtra and Haryana.

The sweets and unique dishes made on this occasion can also be region-specific. On Bhai Dooj, for example, basundi poori (or kheerni poori) is specially cooked in Maharashtra. Khaja, a sweet snack, is made in West Bengal.

According to mythology, Lord Yama, also known as Yamraj (the deity of death), made a visit to his sister Yami one day. She greeted him with aarti, a garland, and a tilak on his forehead. She also offered him sweets and special treats. Overwhelmed by her act, Yamraj declared that on this day, brothers who get a similar ritual (aarti, tika, and sweets!) from their sisters will be promised a long and healthy life. As a result, this celebration is sometimes referred to as Yamadvitiya or Yamawitheya.