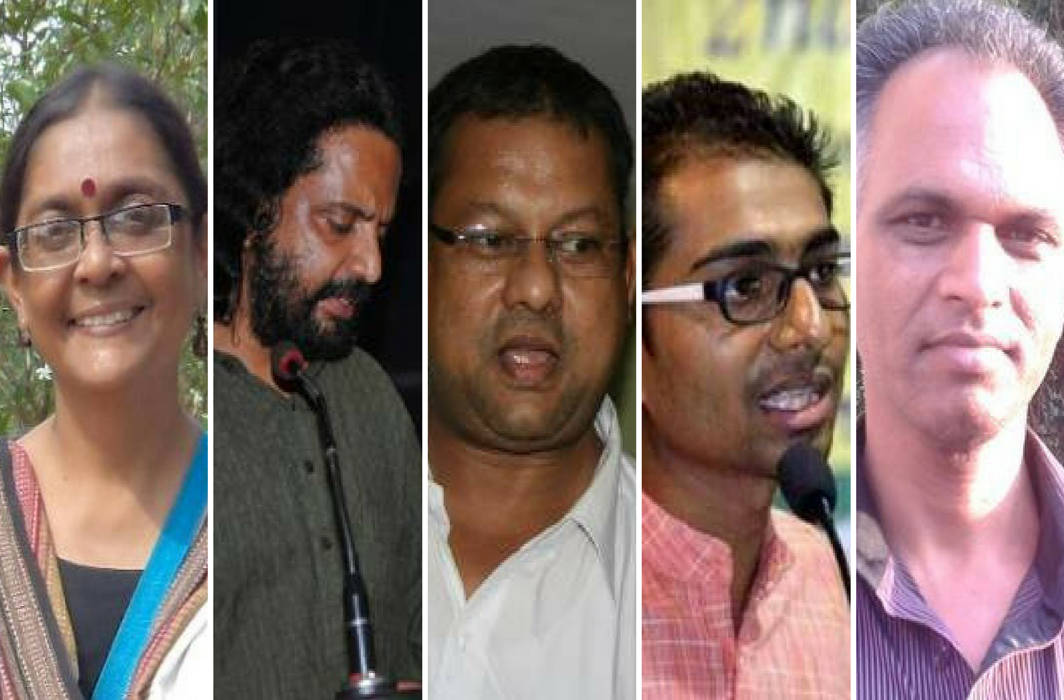 The Pune police chargesheet in Bhima Koregaon case filed on Thursday, November 15, in a special UAPA court alleges “conspiracy to assassinate the PM and to overthrow constitutionally elected government by way of procuring weapons and ammunition” by Maoists.

Also, said the chargesheet, the Maoists are trying to mobilise and incite Dalits and the Elgar Parishad conclave in Pune last December was part of this strategy and it “aggravated” the violence at Koregaon Bhima on January 1, the charge sheet said.

The move came a day before the Supreme Court was to hear the Maharashtra government’s appeal against the Bombay high court’s order refusing additional time to the police for filing a chargesheet in the Elgar Parishad case.

On October 29, the SC had ordered a stay on the high court order after the state’s lawyer said that the five arrested activists will, otherwise, get bail by default.

On August 28, the police conducted raids at the houses of five prominent activists Sudha Bharadwaj, Varavara Rao, Vernon Gonsalves, Arun Ferreira and Gautam Navlakha for their alleged links with the banned CPI (Maoist) outfit. Three of them are under judicial custody in Yerawada jail.

In the chargesheet moved by Pune’s district government pleader Ujjwala Pawar on behalf of investigating officer, ACP Shivaji Pawar, before special UAPA judge KD Vadane, the police said, “Maoist leaders including…Rona Wilson and fugitive Kishan Da were conspiring the assassination of Prime Minister Narendra Modi and waging war against the country for which they were planning to procure arms and ammunition,” it stated.

The police cited several documents seized from the Maoist leaders to make the claim on Modi’s assassination plan.

The larger conspiracy of CPI (Maoists) was to overthrow the democratic system in the country, and the accused were working in that direction, the charge sheet claimed. It also enumerates roles played by Gadling, Dhawale, Wilson, Sen and Raut in “fulfilling the objectives and furthering a larger Maoist conspiracy to create social unrest and overthrow government by way of unlawful activities”.

It alleged that the Maoists supported and funded the Elgar Parishad in Pune on December 31, 2017 as part of a larger conspiracy to create social unrest and overthrow the government.

The provocative speeches and inflammatory statements at the Parishad contributed to caste clashes at Koregaon Bhima near Pune on January 1, police said.

Pune police commissioner K Venkatesham told TOI, “We have filed a 5,160-page chargesheet against 10 people for charges ranging from planning to assassinate lawful authority to being founding members and supporters of the CPI (Maoist); criminal conspiracy; promoting enmity; raising funds for the banned outfit and giving statements causing mischief.”

On the state’s appeal in the SC regarding 90-day extension for filing the chargesheet, Venkatesham said, “The proceedings in the SC is independent of what we are doing here. We have filed the chargesheet because we have completed our investigations.”

City realtor Tushar Damgude had lodged an FIR on January 8 alleging that speakers had made inflammatory speeches and provocative statements at the Elgar Parishad held at the historic Shaniwarwada on December 31, 2017. Police have stated in the chargesheet that organising the parishad was part of the CPI (Maoist) conspiracy “to divide communities and create unrest by way of distorting history and raising a mass uprising against the government. Focusing on Dalits, minorities, women, students and the oppressed class and influencing them against the government formed a part of this conspiracy.”

The chargesheet stated that Dhawale was fulfilling the Maoist objectives through Kabir Kala Manch, a Left-leaning cultural organisation, and was in touch with underground operatives Deepu and Mangalu for two months prior to the parishad.

Following the indication of a Maoist link behind the Parishad, the police had carried out simultaneous raids in Mumbai, Nagpur, Delhi and other places on April 17 and seized several “incriminating material” and electronic devices like laptops, computers, hard disks, pen drives, memory cards and mobile phones from the residences of the five activists, who were finally arrested on June 6. The police obtained cloned copies of material in the seized devices from the forensic laboratory and went ahead with their further probe.

The chargesheet stated that the five arrested activists are active members of the CPI (Maoist). Gadling and Sen raised funds for the banned outfit and for organising the Elgar Parishad as a part of the “Koregaon Bhima Shaurya Din Prerna Abhiyaan”. To keep the unrest alive after the January 1 violence at Koregaon Bhima, the Maoists provided Rs 5 lakh to Gadling and Sen through Raut, a former PMRD research fellow.

Raut also recruited two students from the Tata Institute of Social Sciences in Mumbai and sent them to the Maoist guerrilla zone in the jungles for arms and weapons training, the chargesheet stated. This came to the fore in the correspondence between Wilson and Prakash, it added.

Documents retrieved from Wilson and Gadling’s laptop and computer showed details of Maoist ERB’s decisions taken at a meeting from December 21 to 24. A central committee circular titled, “Present situation and our task”, was also retrieved from these devices and the same stated how terror activities were to be carried out for the struggle against “Brahminical” forces, including the BJP and RSS, by organizing Dalits, minorities, tribals and the poor class, the chargesheet stated.

All five arrested activists were working through various frontal organizations of the CPI (Maoist) such as the Indian Association of People’s Lawyers, Anuradha Ghandy Memorial Committee and Kabir Kala Manch, the chargesheet stated. Wilson and Gadling, in association with the Maoist politburo and central committee members, got Dhawale, Sen and Raut involved in unlawful activities and in organizing meetings attended by underground operatives, the chargesheet added.