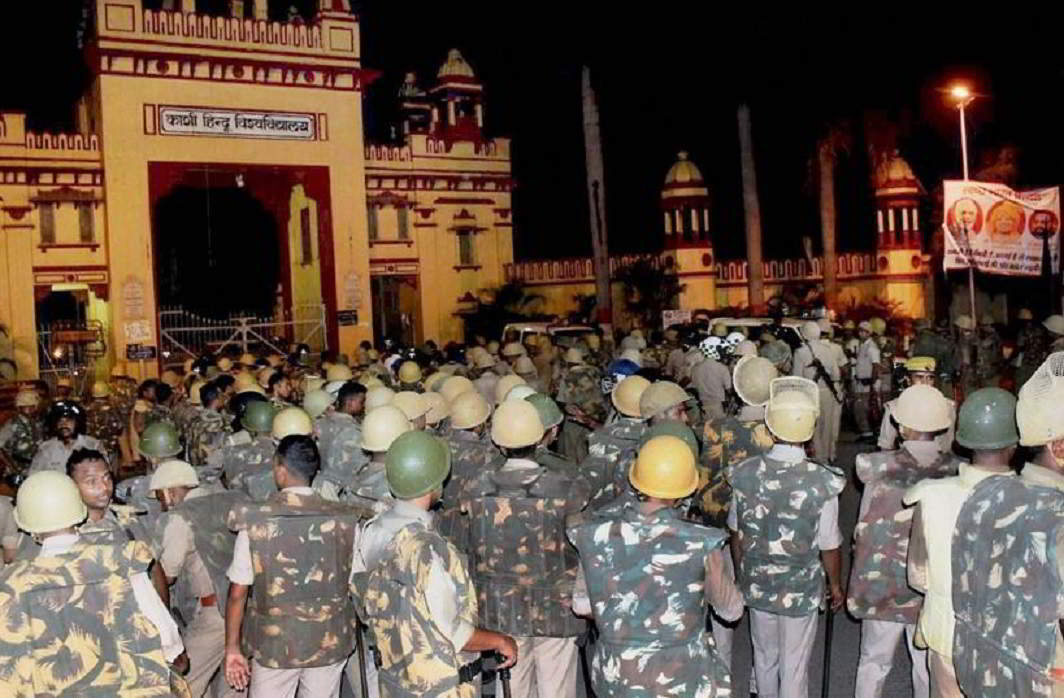 Two days after several students and journalists were injured in a lathi-charge by police on the protesting students at the prestigious Banaras Hindu University, the police have filed FIR against 1200 students on charges of arson and vandalism.

Students’ protests have spread to some other parts of the State, with rallies being taken out in Chandauli and Mirzapur in support of the BHU students.

The incident had occurred on Saturday when protesting students marched towards the vice-chancellor (VC)’s house in a bid to meet the VC and apprise him of their demands. The students were reportedly stopped by University guards and police were called in.

The students claim that the police lathicharged them without provocation, not sparing even women students. Mobile videos of the violence doing rounds in the social media show this violence. One of the video shows a girl falling on the ground after being pushed by a policeman. She is then seen being beaten by two other cops with batons.

However, the police say they had to resort to lathicharge after a group of protestors “mostly outsiders” started pelting stones on the security forces.

BHU has blamed the students of trying to malign the university’s image through the protest just before Modi’s visit to the city.

Protests have been underway in the campus since Thursday with demands of proper safety measures for female students. The protest was triggered by an alleged case of sexual harassment of a female student by motorcycle-borne men inside the campus.

Taking first action in the case, the UP govt on Monday removed three additional city magistrates and two policemen in connection with the baton-charge and failure to contain violence in the campus. Chief Minister Yogi Aditynath has also ordered a probe into the incident.

The Uttar Pradesh government and the BJP came under scathing attack of the opposition post the incident.

Only a barbaric govt unleashes male police with lathis on women students. Why is BJP-RSS so scared of students? https://t.co/NOTfhqvgti

“The government should resolve the issue by talks, not by lathi-charge. It is condemnable. Action should be taken against the guilty,” former chief minister Akhilesh Yadav tweeted in Hindi.