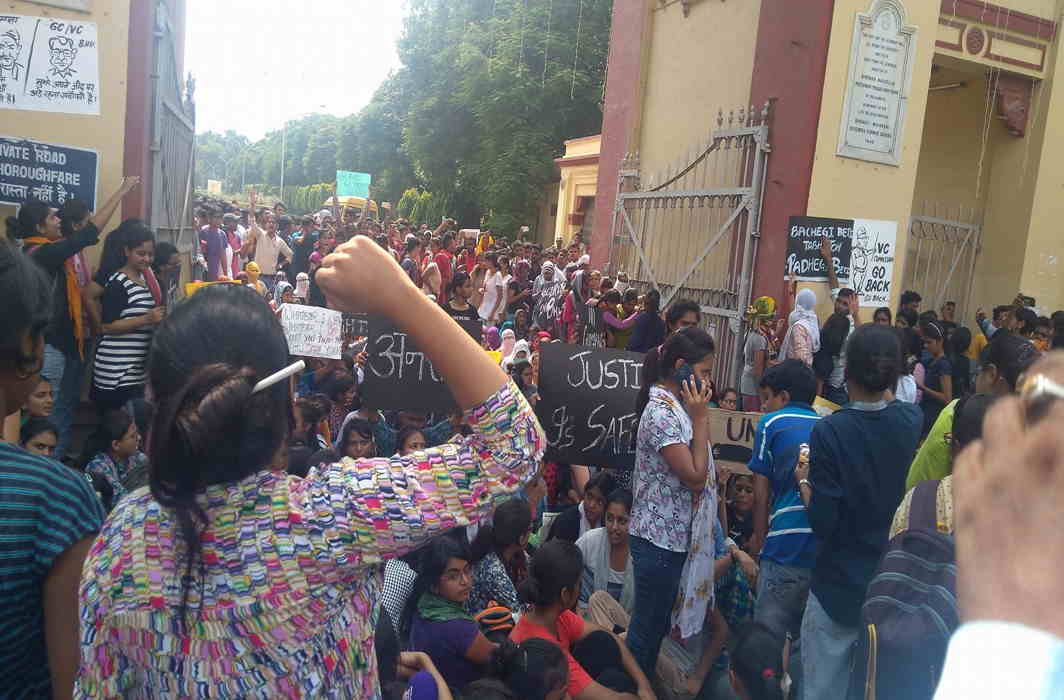 Divisional Commissioner has blamed the university administration, stating that the top body of the varsity had not sensitively dealt with the complaint filed by the victim.


Amid ongoing unrest at the Banaras Hindu University (BHU), Varanasi Divisional Commissioner Nitin Gokarn on Tuesday submitted a preliminary report to Chief Secretary Rajiv Kumar. As reported by ANI, the Divisional Commissioner has blamed the university administration, stating that the top body of the varsity had not sensitively dealt with the complaint filed by the victim.

Gokarn’s report came a day after an FIR was lodged against 1,000 unidentified student of the University. Amid continuing protest, the FIR booked the students for allegedly attacking police officials and indulging in violent activities. However, the Varanasi district administration has ordered a detailed magisterial investigation into the incidents of the last four days.

Hundreds of woman students at the University have been protesting against the BHU admin for victim shaming a girl student who complained of being allegedly harassed by three men inside the campus. The unrest heated up after police officials’ lathicharge on the students on Saturday.

Earlier on Tuesday, BHU Vice-Chancellor Girish Chandra claimed that the incident of sexual harassment was fabricated by outsiders who had an eye on Prime Minister Narendra Modi’s Varanasi visit. Further stressing on his claim that outsiders were involved to shape the incidents to make a lie look like a truth, the BHU VC, speaking to Indian Express, said, “Some people with vested interests and ulterior motives have triggered this incident. The students, if they had a grievance or complaint, should have suggested to the university to do something. But there is a mindset to disturb institutions of higher learning. BHU is not alone. Every university in the country is being disturbed.”

In another major claim, the VC stated that the incident reported by the victim was a case of eve-teasing and not molestation. Stating that the molestation was done to trigger the unrest, Tripathi told Indian Express, “They are those who are not committed to the nation but work only for their individual selves. They don’t care about the nation or its institutions. Unke liye niji hit hi sab kuch hai. Prime Minister aane waale the, isiliye mujhe lagta hai yeh sab kuch karaya gaya tha (For them, personal benefit is everything. The Prime Minister was to visit and that’s why, I feel, all this was done).”

Further claiming that the campus has adequate security measures in place, Tripathi stated that “security for boys and girls can never be at par”. However, he also mentioned that the administration cannot assign guards to protect each of the 10,000 girls living at the campus. Refuting to allegations claiming that the university doesn’t listen to students, the VC said, “There are 10,000 girls on campus but only a handful are the ones who always have such complaints. We are doing our best for the students. We have formed a committee headed by a high court judge to inquire into the incident.”

According to a few reports, Tripathi has been summoned to Delhi by the HRD Ministry. However, the university spokesperson ruled out such claims and stated that the VC has gone to Delhi to attend a quarterly meeting of BHU Executive Council.

Hitting out at the BJP-led Uttar Pradesh and Center government over the BHU unrest, Congress vice-president Rahul Gandhi sought an apology from PM Modi for the incident has occurred in the Prime Minister parliamentary constituency. “The incident at BHU is BJP’s version of `Beti Bachao, Beti Padhao’. And, when they (girls) demand their rights, beat them up. This incident happened in the PM’s constituency. Modiji should apologize to the students of BHU and take immediate action,” said Gandhi.

“First of all, it is not an incident of molestation, it is one of eve-teasing.”

“I think this issue was created by outsiders and the shape it took is what is more unfortunate than the initial incident itself.”

“If force was used on girls, I have no idea.”

“It was such a situation that force had to be used.”

“Security for boys and girls can never be at par”

“If someone is doing “netagiri” then, of course, we will shut the hostels and campus.

“This is a rumour that girls are scared or insecure on campus.”

“This is such a big campus, anything can happen anywhere. We cannot assign a guard to every student.”