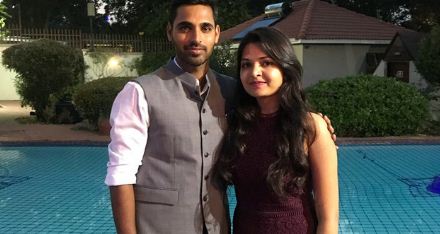 Indian cricketer Bhuvneshwar Kumar and wife Nupur Nagar on Wednesday were blessed with a baby girl. The pacer’s wife gave birth to the girl at a private hospital in Delhi.

Nupur and Bhuvaneshwar had got married on November 23 in 2017 in a ceremony in Meerut. They became parents just a day after the couple celebrated their fourth wedding anniversary. Reports also say that the Team India bowler was not in the hospital due to his commitment to the national team which India won the three-match T20I series against New Zealand.

The pacer has been focusing on his place in the national team, as he had a poor T20 World Cup 2021 in the UAE. He has been struggling with injuries for since long. After having a struggling time in personal and professional life, finally, something cheerful happened for the Indian bowler, as he also lost his father in May this year.

After having an awful time at the 2021 T20 World Cup, the cricketer made a decent comeback in the T20I series against New Zealand, picking three wickets in three matches with an economy of 7.50.

Well, Bhuvi is not alone who has been blessed with a daughter, there are other Indian cricketers who are also proud fathers of their daughters.

Here’s the list of Indian cricketers who have been blessed with daughters.