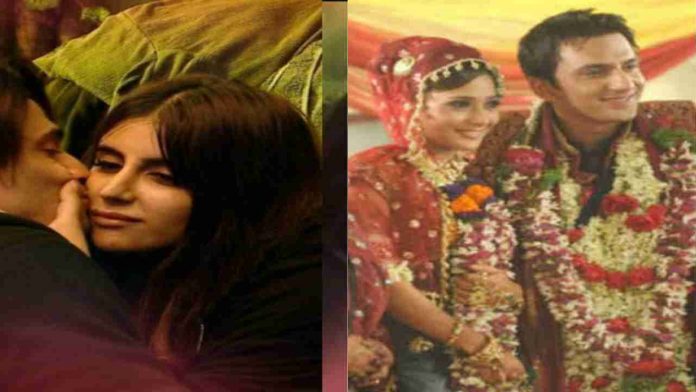 Bigg Boss house has witnessed a number of romances and kisses being exchanged between the fellow contestants. While some created fake love stories to stay in the game for long, some ended up getting married after the show. Ironically, this is one primal element of the reality show that keeps it above in the TRP race.

Currently, Bigg Boss season 15 is going on and this year, the contestants who fell in love within the shortest span of time are Ieshaan Sehgal and Miesha Iyer. The newly formed couple have been spotted sharing kisses, cuddling, and snuggling on several occasions in the house.

On the Weekend Ka Var episode, host Salman Khan schooled the couple for kissing on national television and warned them for the same.

Undoubtedly, love stories that bloom inside the Bigg Boss house fetch a huge number of headlines and TRPs for the show. Let’s take a look at the list of couples who fell in love on Salman Khan’s reality show.

Couples who fell in love on Salman Khan’s reality show

The Bidai fame Sara Khan entered Bigg Boss 4 along with her boyfriend Ali Merchant. The couple went overboard and got hitched inside on national television. They became the first couple to get married in the history of Bigg Boss. Their marriage was considered as mere publicity after they parted ways just 2 months after the fourth season ended.

This couple too was a part of Bigg Boss season 4 and hit headlines with their closeness inside the house. After the show, the couple also appeared in the film Supermodel together. Later, they both split and Ashmit claimed that Veena was in love with him, however, he didn’t feel the same way.

Gauahar Khan and Kushal Tandon participated together in Bigg Boss season 7. The duo met inside the house for the first time and fell in head over heels for each other. The Ishqzaade fame backed Kushal on several arguments that took place inside the house. Gauahar emerged as the winner of the season and they also participated in Rohit Shetty’s stunt-reality show, Khatron Ke Khiladi. However, they broke up after a year of dating.

The former couple met in Bigg Boss 8 and gradually fell for each other. They hit headlines after they were spotted sharing kisses and getting cosy when the lights went off inside the BB house. Upen and Karishma went on to participate in the dance reality show Nach Baliye wherein the former proposed the latter. They also judged MTV’s reality show Love School.

Himanshi Khurana entered as a wild contestant in Bigg Boss’s most successful season, BB 13 and it was Asim who got smitten by her. Himanshi took time to express her feelings as she was already in 11 years long relationship. After getting evicted from the show, she re-entered the show to support Asim and expressed her feelings for him. The couple is together to date.

This couple is currently making headlines with their intimate moments in Bigg Boss 15 house. In Sunday’s episode, Ieshaan Sehgal bends on his knees and propose to Miesha Iyer and she said yes.

The heartbreaking song will take you through the story of Rubina Dilaik who patiently waits for her love to return from abroad only to find out that he ditched her.
Read more
Bollywood news

Producer Manish Shah claimed that Kartik Aaryan has threatened to walk out of the Hindi remake of Allu Arjun starring Ala Vaikunthapurramuloo if the dubbed Hindi version of the film will be released in theatres.
Read more
Bollywood news

It is reported that the police summoned the teenager on January 19 for questioning over the charges of stealing a phone. His mother Sitadevi also went to the police station along with the village head, Gurbaz Singh, and some others.
Read more
Load more