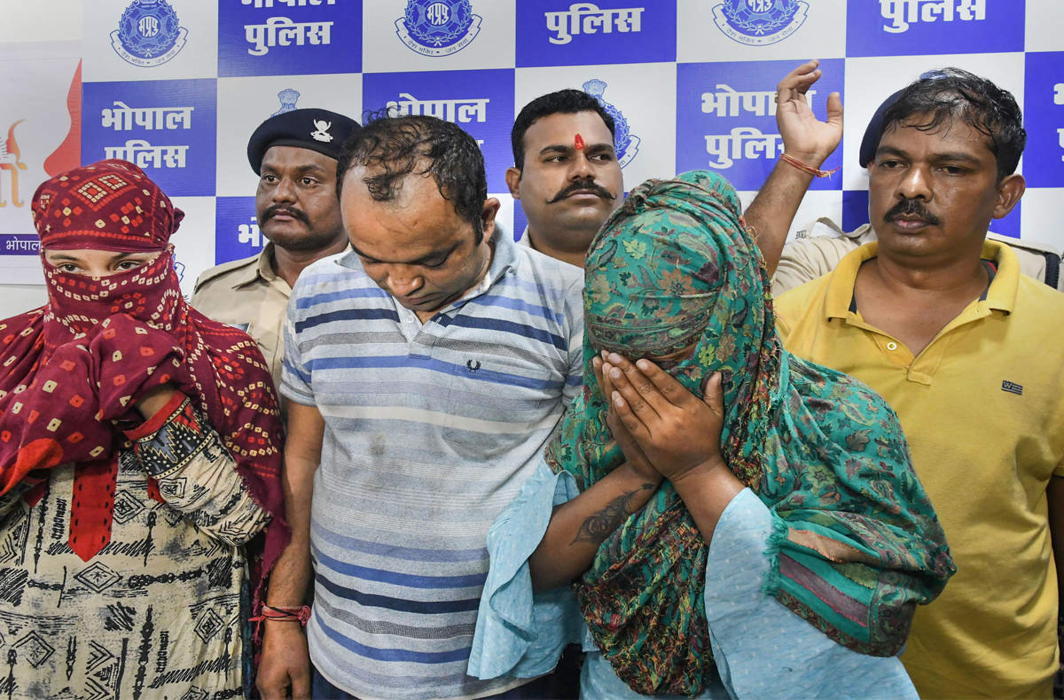 The country’s biggest sex racket, allegedly run by a former BJP Yuva Morcha leader in Madhya Pradesh, to trap the rich and powerful, has kicked up a storm that may spread to other states.

Reports say nearly 4,000 files consisting of sex chats, video and audio clips featuring bureaucrats and politicians have been extracted from the laptops and mobile phones confiscated from the honeytrap ring that allegedly hooked a large number of movers and shakers in the state.

More and more skeletons are tumbling out of the closet as forensic experts work overtime to dig into memory cards and retrieve erased photos and videos. The list of digital files is likely to touch 5,000 soon, said officers, according to a Times of India (TOI) report.

A dozen top bureaucrats and eight former ministers of Madhya Pradesh are being investigated in the case, reported NDTV. Those lured into the trap include a former Chief Minister and Governor of Madhya Pradesh, according to an India Today report.

The racket was run by Shweta Jain, a former general secretary of BJP Yuva Morcha, who runs a local NGO and rents the house of a BJP MLA, Brijendra Pratap Singh.

Amid the political slugfest that broke out after the high-profile honey-trapping and blackmailing racket came to light, the Congress has released photos of the mastermind campaigning for the BJP in 2013 and 2018. Madhya Pradesh Congress Vice-President Arunodey Choubey has reportedly alleged that Shweta Jain was a star campaigner of the BJP in Madhya Pradesh assembly elections of 2013 and 2018.

The gang was caught after an Indore Municipal Corporation (IMC) officer Harbhajan Singh filed a complaint against Arti Dayal accusing her of demanding Rs. 3 crore from him.

When Dayal travelled to Indore to allegedly receive Rs. 50 lakh as the first installment of the extortion sum, she was arrested, the police said. The others were arrested based on her interrogation. The IMC officer has been suspended.

Those honey-trapped by the gang range from very senior bureaucrats to junior project engineers, and top BJP and Congress leaders.

The women running the racket used sex workers and young college girls, the police say. More than 40 call girls, including a few B-grade actresses from Bollywood were engaged to honey-trap bureaucrats and politicians. The hundreds of mobile phone contacts uncovered in raids suggest the scam may not have been limited to Madhya Pradesh.

The Special Investigation Team (SIT) of MP police led by Additional Director General of Police (ADGP), Sanjeev Shami, is gathering clinching evidence by matching video clips with the location of sites where it was shot by the call girls or by the women running the sex and blackmailing racket.

In her interrogation, the ring leader Shweta Jain has allegedly said at least two dozen college students, mostly from lower middle class families, were used to seduce top officials and politicians. She has reportedly admitted that she lured many college girls with the promise of jobs and by flaunting a luxurious lifestyle featuring Audi cars and five-star hotel rooms.

Shweta Jain hired top call girls to honeytrap bureaucrats and politicians holding important offices of the state government. “After initial interaction with a bureaucrat or a minister, Shweta used to invite the ‘target’ for sex, to a guest house or a five star suite of her choice. Once the ‘target’ was involved in a sexual act, his video was recorded either by a hidden mobile or a spy cam,” a report by news agency quoted an unnamed SIT officer as saying.

Some of the ‘target’ who flew to Mumbai or Delhi on official tours were provided models and Bollywood actresses, often on their demand. However, SIT has still to seize such video clips where any known actress could be seen.

During her interrogation Shweta reportedly confessed that once a Minister or Secretary was honey-trapped, his favour was sought in procuring lucrative government contracts for the NGO run by Shweta. Sources said that Shweta admitted that the NGO run by her husband was obliged with Rs 8 crore contract from the Bhopal Municipal Corporation. Many such contracts running into several crores were secured from various state government departments such as PWD, Housing, Social Welfare and other Government corporations. Shweta also admitted that a former CM of MP gifted her a bunglow in Minal Residency, in posh Bhopal area.

Besides Shweta Jain, another women Aarti Dayal, arrested by the SIT, admitted during her questioning that she came in contact with a senior IAS officer of MP cadre who introduced her to several ministers. Aarti said she continued to oblige the IAS officer who also arranged a flat for her in Bhopal. Later the flat, occupied by Aarti became a den of all sorts of illicit deals.

Aarti also revealed that spy cameras were installed in a few rooms of the flat where politicians, bureaucrats and top government engineers were stung in a compromising position. Aarti also employed call girls in performing sting operations. In a few cases, Aarti also obliged ministers by engaging B grade Bollywood heroines and models.

Like Shweta, the mastermind of the racket, Aarti also floated an NGO to procure large amount of government funds from the bureaucrats and the Ministers concerned in lieu of providing them call girls. Aarti also revealed that only in rare cases the ‘target’ was confronted with the spy cam recordings as in most of the cases, the “target” used to easily facilitate government funds to her NGO.

A case could be registered against these high profile persons, once it is established that they obliged the women with government funds or lucrative contracts.

As per the provisions of Prevention of Corruption Act, only those government servants (including Ministers) could be charged who have granted out-of-turn contracts or funds from the treasury to the sex-blackmail syndicates. Participation in illicit sex activities does not attract sections of the Corruption Act, though action can be taken under Service Conduct rules.

CID on Wednesday registered a case of human trafficking against three of the honeytrap suspects on the basis of a complaint lodged by the father of the youngest accused, an 18-year-old, who was arrested on the basis of an extortion complaint by Indore Municipal Corporation engineer Harbhajan Singh, and is in police custody.

A farmer whose daughter has also filed a case claiming she was lured into the scandal on the pretext of getting a government job, said: “Aarti Dayal, one of the accused, and Abhishek came to our village and convinced us that they would bear all the expenses of my daughter’s education and help her get government job.”

The farmer claimed that his daughter had told him that Dayal and others had trapped many young girls in the name of providing government jobs and forced them to honey trap influential persons. “My daughter told me to inform villagers not to send their daughters with Dayal as she was not a good person.”

Senior superintendent of police, Indore, Ruchi Vardhan Mishra said all of them will also be booked for human trafficking. “The accused were not cooperating in investigation. Arti Dayal often fainted which made her interrogation difficult,” Mishra added.