Badlav Patra: A look at salient features of Congress manifesto for Bihar election 2020 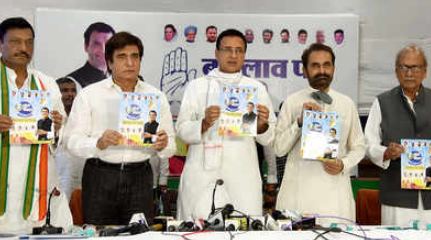 Congress party has made a number of promises in its manifesto titled Badlav Patra – 2020 ranging from a monthly allowance of Rs 1,500 for each unemployed youth to review of the decision to ban the sale and consumption of liquor in the state. The manifesto also talks about loan waiver, electricity bill waiver and increasing irrigation facilities for farmers in Bihar. It also promises to provide 10 lakh jobs to the unemployed in the state. Nearly 4.5 lakh vacant posts in the government departments will be filled up in the coming 18 months.

In addition, the party document mentions introduction of NYAY — a direct cash transfer scheme which was envisaged by Rahul Gandhi just ahead of the Lok Sabha elections in 2019. Congress plans to provide honorary pension of Rs 800 monthly for the elderly and women. Rs 1,000 will be given to octogenarians in the state by the Congress government. The widows and single women over 60 years will be given Rs 1,000 monthly pension.

There is a promise to increase the health budget to eight to 10 percent of the GDP. The industrial units which provide employment to 75 per cent youth from the state will be eligible to get a rebate in GST, electricity rates and interest rates.

Similar to other Congress-ruled states, the party promises to introduce a farm loan waiver scheme. There is also a mention of regularisation of contractual teachers in the state. While launching the manifesto last month, Shaktisinh Gohil, Congress’ in-charge of Bihar, had said that if Mahagathbandhan comes to power it will reject recently enacted farm laws by drafting separate state farm bills as was done in Punjab.

The manifesto also talks about making provision for free education to girls from kindergarten to postgraduate level. The party document also lays emphasis on reserving 35 per cent seats in higher educational institutions for girl students. Similarly, the girls scoring 90 per cent marks in class 12th will be provided with a scooty by the state government.

There are also plans to make Maithili language a compulsory subject for students in schools. On migrants facing problems due to coronavirus lockdown, the manifesto talks about establishing a ‘mazdoor information center’ in all districts of Bihar.

On Dalits and Mahadalits, the manifesto said that  they will get piped water at their homes under Babu Jagjivan Ram Peyajal Yojana. Dalit girls will be eligible for 80 per cent scholarship in higher education. Dalit families will get assistance of Rs 21,000 for daughter’s marriage under the Indira Gandhi Kanya Vivah Yojana.