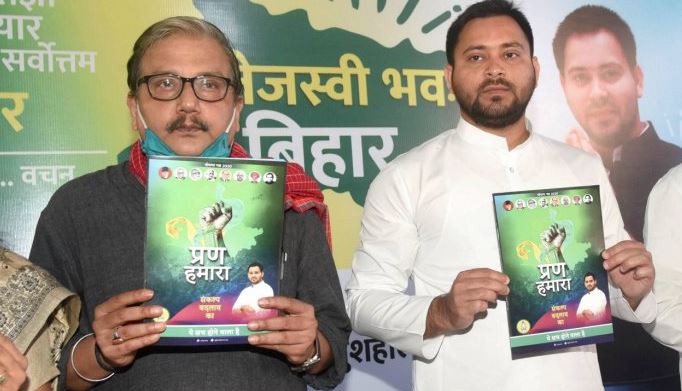 The Rashtriya Janata Dal (RJD), which heads the Mahagathbandhan in Bihar, released its poll manifesto on October 25. The manifesto was released by Tejashwi Yadav, the chief ministerial candidate of the Mahagathbandhan, opposition  at a press conference in the party’s office in which Yadav said their party will provide 10 lakh jobs to the people of Bihar, waive loans given to farmers and their party will provide good infrastructure in the state.

While detailing the party’s plans for the state if the RJD is voted to power, Yadav slammed the BJP for trying to fool the people of Bihar by promising them 19 lakh jobs.

The RJD manifesto stressed on increasing the income of farmers and waiving Kisan Credit Card loan taken by farmers till 2020. It also vowed to buy grain from farmers at an enhanced minimum support price that would include bonus.

Tejashwi Yadav said the RJD will promote investment for setting up industries so that citizens of the state are not forced to leave Bihar. The RJD also promised computer training to citizens in every panchayat free of cost. An international-level sports university would also be established, the RJD manifesto said.

RJD’s manifesto displays the picture of Mahatma Gandhi, Dalit icon BR Ambedkar, freedom fighter Maulana Abul Kalam Azad, socialist icons Ram Manohar Lohia and Karpoori Thakur, Loknayak Jayaprakash Narayan among others, but the party’s manifesto does not have a photo of the party’s founder Lalu Prasad. Obviously, a conscious decision not to give the NDA a stick to beat the RJD with. Meanwhile, Tejashwi’s photo is the cynosure of the manifesto.