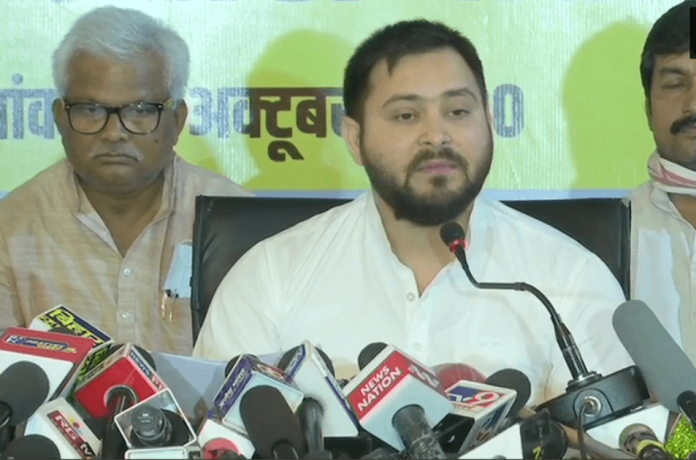 Rashtriya Janata Dal’s chief ministerial candidate Tejashwi Yadav on Wednesday said Union Minister Nityanand Rai’s remark that terrorists from Kashmir will find safe haven in Bihar if the RJD won the state election is an attempt to divert the voters of Bihar.

Countering Rai’s comment, Yadav said the National Democratic Alliance government of 15 years in the state should say something on the terror of unemployment, poverty, starvation and migration. Currently, the unemployment rate of Bihar is 46.6%, he said. RJD Rajya Sabha MP Manoj Kumar Jha said everyone in Bihar was hurt and humiliated by Rai’s remarks.

At a rally in Vaishali on Tuesday, Rai, the Union Minister of State for Home Affairs, said if the RJD came to power, terrorists from Kashmir will start taking shelter in Bihar. Rai is the Lok Sabha MP from Ujiarpur in Samastipur district of Bihar.

Defending Rai, BJP’s Bihar unit chief Bhupendra Yadav said his statement was in the context of national security and was being twisted.

Slamming Nityanand and his party, Chitranjan Gagan, the state spokesperson of RJD, said his remark on Bihar is extremely shameful and reflects the party’s mentality and its agenda of spreading hate. Gagan said Rai should apologise to the people of Bihar for his remarks.

Bihar will elect its 243 MLAs oin polls over three phases, starting October 28, November 3 and November 7. The results will be out on November 10.

Rai’s statement is similar to a statement made by Home Minister Amit Shah during the 2015 Assembly polls in Bihar. He had said if the BJP lost in Bihar, crackers would go off in Pakistan. In the 2015 election, the Janata Dal (United) of Nitish Kumar and the RJD had contested on 101 seats each and the Congress 41 as part of the grand alliance. The JD(U) scuttled the alliance government in 2017 and re-aligned with the BJP.