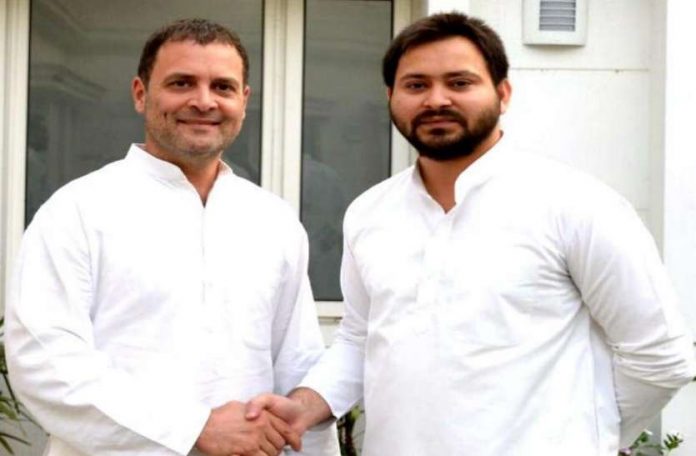 The Rashtriya Janata Dal-led Mahagathbandhan looks set to snatch power in Bihar, according to most exit polls commissioned by TV news channels on Saturday after the third and final phase of polling.

With the third and final phase of Bihar Assembly elections coming to an end, exit polls predicted the Mahagathbandhan is expected to win 124 of 243 seats and Chief Minister Nitish Kumar’s NDA to get 110 seats. India Today Times Now-C Voter gave 116 to the NDA and a slight lead for the Mahagathbandhan at 120. Exit polls are usually very shy of calling a defeat for the NDA, as evidenced in earlier elections including the Bihar 2015 poll.

The same pollsters are also uneasy at showing if there is a landslide on the way against the NDA. Tejashwi Yadav is leading the race for CM as per several exit polls but is closely followed by Nitish.

The whirlwind campaign by BJP heavyweights including Prime Minister Narendra Modi in the last two phases didn’t seem to have an effect on the NDA’s predicted downfall. Most people polled said Modi’s rallies changed their decision while a larger number were unconvinced or unsure.

Voters said the key reason for their voting for the Mahagathbandhan this time has been the unemployment numbers. The true picture of what the voters of Bihar, especially the migrant workers who had to walk thousands of kilometres during the coronavirus-caused lockdown, is yet to be revealed.

Before the poll campaign gathered steam and pace, the younger son of Lalu Yadav was dismissed as a dynast without imagination and ability to mount a campaign that could oust Nitish. Even Tejashwi’s decision to give 70 seats to the Congress as part of the Mahagathbandhan drew ridicule from NDA ranks and the media.

The other youngster, Chirag Paswan, if one goes by exit poll data, is likely to have a very hard time with both the Lok Janshakti Party and himself tanking in ratings among people polled after they voted in the three successive phases.

Amid a surge in Covid-19 cases, voting for the first of the four-phase Uttar Pradesh Gram Panchayat poll began on Thursday in the 18 districts with ballot papers under tight security.
Read more
Load more