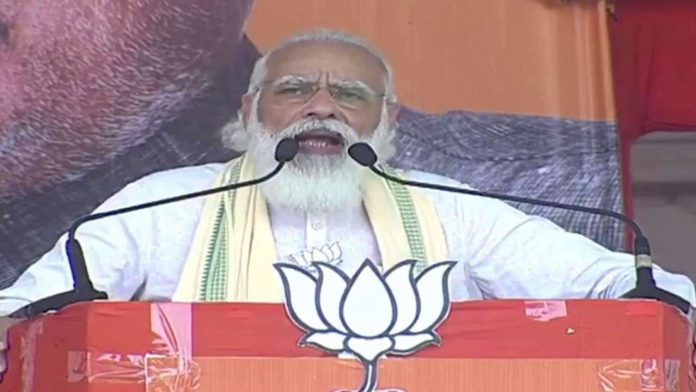 Ahead of Bihar Elections 2020, PM Narendra Modi on Friday addressed a rally at Biada Maidan in Sasaram. Launching a massive attack on the opposition, the PM said that voters of the state have pledged not to give another chance to those who were responsible for the pathetic law and order situation in the state. The prime minister said the lantern era is now gone and people must not forget how bad the situation was when those with lanterns were in power.

Hitting out at the UPA, the PM said it did not allow Bihar CM Nitish Kumar to work and wasted his 10 years. The PM said that the state is finally heading towards development under the capable leadership of Kumar. PM Modi also lauded the measures being taken by the Bihar government to handle the coronavirus pandemic in the state. Thanking the people of the state for cooperation, the PM said that steps taken by the Bihar government and people are highly commendable.

Referring to the opposition’s statements on Article 370, the PM said those who promise to bring back Article 370 are today asking for votes from people in Bihar. He asked if this was not an insult to Bihar, a state which sends its sons and daughters to border to protect the country?

During his rally, the PM also spoke about farm bills, which have resulted in a massive uproar with protests across the country. He said those protesting against farm laws want to serve middlemen and brokers.

Paying tribute to Ram Vilas Paswan and Babu Raghuvansh Prasad Singh who died recently, the prime minister said that the state had lost two of its sons who worked for the marginalized sections of the society. Bihar is set to go to polls in three phases starting October 28. The results will be announced on November 10.