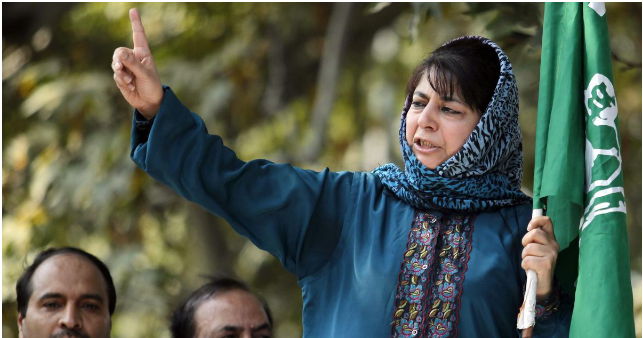 The Bharatiya Janata Party on Friday accused People’s Democratic Party Chief Mehbooba Mufti of making seditious remarks wherein she said she will only hold the national tricolour after the flag of Jammu and Kashmir is restored.The party has demanded her arrest and said no power can either hoist the state flag or restore Article 370 of the constitution in the state.

In her first press conference after being released from 14 months of detention, the former Jammu and Kashmir chief minister on Friday said she will raise the Tricolour only when the state flag is also restored. Mufti addressed the media with the flag of the erstwhile Jammu and Kashmir state in front of her.

Mufti said the country will run on the constitution and not on the BJP’s manifesto. She said the party is looting the dignity of the people of Jammu and Kashmir. She further declared that she will not contest any election until Article 370 is restored.

The Jammu and Kashmir BJP president Ravinder Raina said the party will not allow anyone to disturb peace, normalcy and brotherhood in the state. He warned Mufti not to instigate people, and said she will have to face the consequences, in case anything wrong happens. He requested Lieutenant Governor Manoj Sinha to book Mufti in charge of a seditious act and put her behind bars.

Jammu and Kashmir is an integral part of the country, hence only one flag can be hoisted, that is the national flag, said Raina.Further referring to the Centre’s move to abrogate Article 370, Raina said the decision cannot be reversed, as the Article 370 gave rise to separatism, terrorism and was instrumental in killings of thousands of people.If Kashmiri leaders feel insecure in India, they can go to Pakistan and China, he added.

The Jammu and Kashmir Pradesh Congress Committee’s chief spokesperson Ravinder Sharma said Mufti‘s remark was highly provocative and irresponsible and has hurt the sentiments of people.

Mufti, along with other political leaders like former chief minister Farooq Abdullah and his son Omar, were detained for months to prevent backlash against the decision to withdraw special status and bifurcate the former state into two union territories on August 5, 2019.Following which the Jammu and Kashmir state flag, which used to fly along with the Tricolour atop the civil secretariat building in Srinagar, was removed.