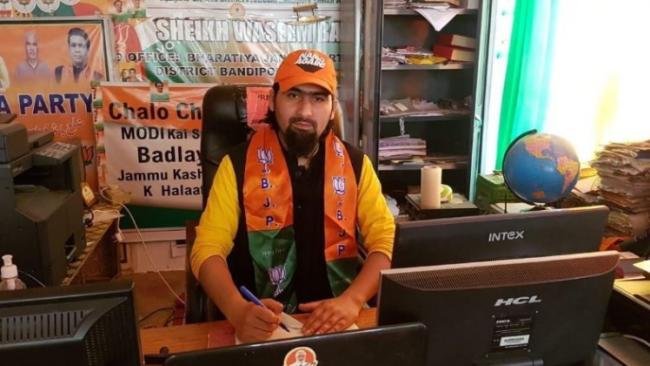 Sheikh Waseem Bari, a local BJP leader and two members of his family were shot dead by suspected terrorists in Kashmir’s Bandipore district late on Wednesday evening. Sheikh Waseem Bari was a former president of the Bharatiya Janata Party in Bandipora district, 60 km north of Srinagar.

Sheikh Waseem Bari’s father Basheer Ahmad and brother Umar were also killed in the attack that took place at his shop in Bandipore, said police.

Inspector general of police Kashmir, Vijay Kumar said that Bari,his father and brother received critical injuries in the gunfire opened by terrorists at his shop. All three were rushed to the hospital but were declared brought dead, Kumar said.

The incident took place despite Bari having ten personal security officers to guard him. None of them were present when the militants attacked, said Kumar. At the time of the incident, they were sitting on the first floor of Bari’s house, which is adjacent to the shop. All ten of his PSOs have been arrested, he added.

A combined team of state police and army personnel have launched a man hunt to nab the terrorists. BJP National General Secretary and Party’s Incharge of Kashmir Affairs, Ram Madhav and former J&K chief minister Omar Abdullah condoled the death of Bari. Soon after the attack, Omar tweeted, “Sorry to hear about the murderous terror attack on the BJP functionaries and their father in Bandipore earlier this evening. I condemn the attack. My condolences to their families in this time of grief. Sadly the violent targeting of mainstream political workers continues unabated.”

Bari was a young BJP leader, who was a well known figure in Bandipore district. The development comes a day after NIA arrested a local youth for providing logistical support to Jaish-e-Mohammed terrorists who carried out Pulwama terror attack in February 2019 by ramming an explosive laden car into a CRPF convoy killing 40 troopers.

Bilal Ahmed Kuchey, a resident of Kakpora of Pulwama district, was the seventh person to be arrested in connection with the case. He is supposed to have given shelter to the JeM terrorists and provided them with high end phones for communication with their handlers in Pakistan and also among themselves while planning the execution of the attack. One of the mobile phones he arranged was used by Pulwama bomber Adil Ahmed Dar for recording his last video, said NIA.