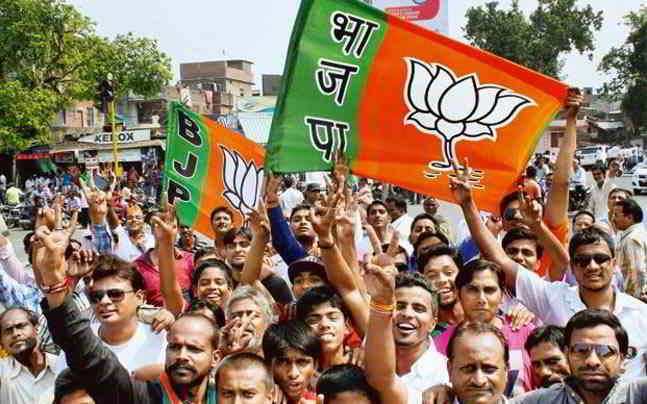 The BJP, which is in power at the centre, is sweeping the elections to New Delhi’s three civic bodies, as per reports on the counting day. Early trends of the results are a blow to the Aam Aadmi Party—in power in the national capital—and its leader Arvind Kejriwal who is going through a crisis after AAP’s poor performance in the recently-concluded state assembly elections.

AAP and the Congress are in a tight race for the second position.

According to NDTV, AAP leader and Delhi minister Gopal Rai responded to the results, saying, “This is an EVM wave, not a Modi wave.” He alleged that the voting machines were manipulated to help the BJP win.

As the results started coming in, senior leaders of AAP reached Kejriwal’s residence. The Delhi CM has announced his plan to launch a “nationwide movement” against rigged EVMs.

The victory of BJP in the civic polls will fuel its campaign for the 2019 general elections while leaving its opposition even more demoralized.

Reports say that the biggest setback will be for Kejriwal who is heading the Delhi government as the results are being seen as a referendum for his governance. It will open up difficult questions like the Delhi CM’s ability to win major elections after the party’s humiliating defeat in the Punjab and Goa polls.

The city’s civic bodies have been under BJP rule for a decade.

Polling to 270 of the 272 wards of the three corporations in Delhi was held on April 23.