Home Latest Politics News BJP to have a ‘mahagathbandhan’ in TN, to tie up with AIADMK-PMK... 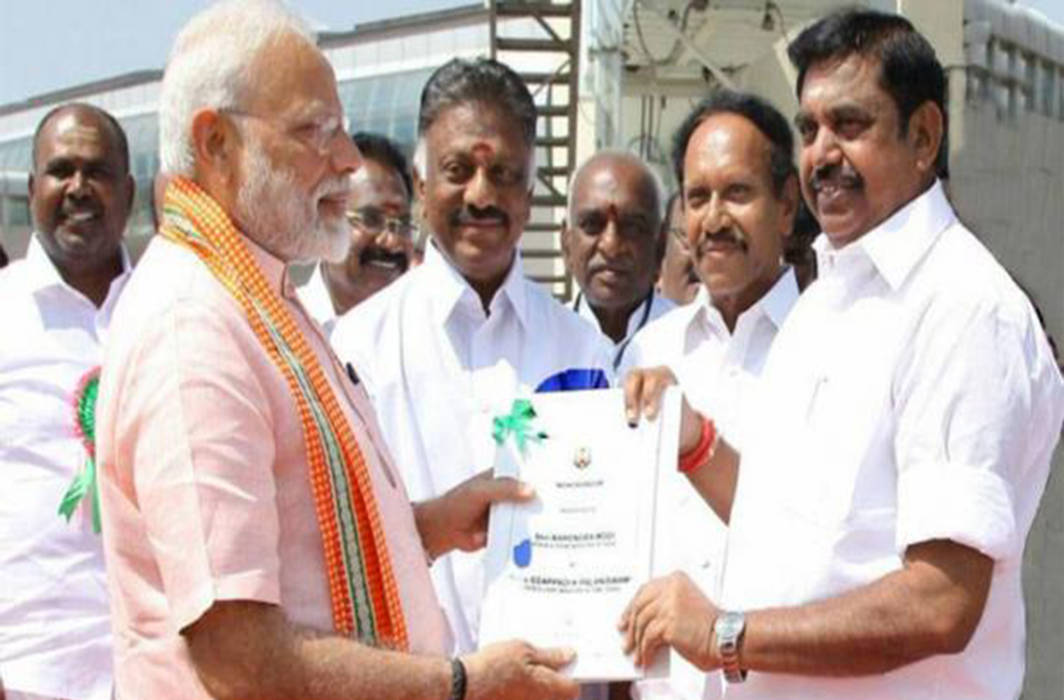 The ruling AIADMK in Tamil Nadu today (Tuesday, Feb 19) sealed an alliance with PMK for the upcoming 2019 Lok Sabha elections and a tie up with BJP is also likely to be announced soon.

The PMK had been critical of both the AIADMK and the BJP in the recent past.

The alliance with BJP was earlier expected today but party president Amit Shah cancelled his visit to Chennai, owing to AIADMK’s negotiations with the PMK.

Union Minister Piyush Goyal will, however, be arriving in the city and will be holding talks with AIADMK leaders, said media reports citing sources. This would be the second round of talks led by Piyush Goyal, who was in the city on February 14 for discussions on the ‘grand alliance’.

The temporary hold up, according to sources in the AIADMK, was because of the PMK was in talks with both the ruling party and the opposition DMK. Also, smaller parties like DMDK are not yet completely on board with their share of seats. The announcement of an alliance between the AIADMK and the BJP may not include seat details just yet.

Deputy Chief Minister O Panneerselvam told reporters that PMK would get 7 seats in the parliamentary polls. In addition to this, the PMK will also be allotted one Rajya Sabha seat. Tamil Nadu has 39 Lok Sabha constituencies.

The DMK meanwhile is likely to go with its already existing partners including Congress, CPI, CPM, MDMK, VCK and IUML.

In the 2014 Lok Sabha Elections, the PMK was part of the NDA alliance led by the BJP and included parties such as the DMDK and the MDMK. The PMK managed to bag the lone seat of Dharmapuri with Anbumani Ramadoss emerging the winner.

However, Anbumani Ramadoss was reportedly miffed with the BJP after he was not given a cabinet berth in the Narendra Modi government. Till last month, PMK was reported to be in talks with Congress.

While addressing the press conference today, reported The Hindu, PMK founder Dr S Ramadoss said that the details of the constituencies in which the PMK will contest will be made at a later date.

“It is a victorious alliance, mega alliance. The reasons why we decided to ally with AIADMK will be explained by Anbumani Ramadoss. We have placed 10 conditions/demands for the alliance with AIADMK,” said Dr Ramadoss.

Dr Ramadoss also read out the 10 conditions/demands placed before the alliance leader AIADMK for ‘people’s welfare’ mostly revolved around the issues that the PMK has raised in the past: declare the delta regions as ‘protected agricultural zones, implement alcohol prohibition, conduct caste-based census in the State, immediate release of seven Tamils convicted in the Rajiv Gandhi assassination case, shut down sand-mining quarries, revert to the old pension scheme for State government employees, remove NEET for Tamil Nadu medical aspirants, and others.

Just as the reporters began raising questions about PMK’s severe criticism in the past of the AIADMK government, Dr Ramadoss decided to wind up the press meet and leave.

The PMK, led by S Ramadoss, has a support base in northern Tamil Nadu, especially among the OBC Vanniyar community. In successive Lok Sabha elections since 1999, the party has polled 5-10% votes in the state.

Both DMK and AIADMK had been wooing PMK in the last one month in their efforts to form a rainbow caste coalition for 39 Lok Sabha seats in Tamil Nadu and one in Puducherry. A leading industrialist was instrumental in bringing the PMK onboard the BJP-AIADMK alliance, according to a CNN-News18 report.

In Tamil Nadu, the BJP is a minor player compared to the ruling AIADMK. In 2014, snubbed by former chief minister J Jayalalithaa, BJP formed an alliance with parties like MDMK, PMK and DMDK and won only two seats; the BJP’s Pon Radhakrishnan, who won the party’s lone seat in Kanyakumari, became a union minister. The J Jayalalithaa-led AIAMDK won 37 seats.

In Tamil Nadu elections two years later, the BJP scored a duck. The party is aggressively chasing an alliance this time to gain a foothold in the major southern state.

The AIADMK, pursued by the BJP, held out for long and even declared more than once that such an alliance was out of the question. But over the past two years, the party has seen dramatic changes since the death of its charismatic and strong leader Jayalalithaa in 2016. The AIADMK split down the middle with a rebel faction supporting Jayalalithaa’s closest aide VK Sasikala, who made a failed bid to take over the party and chief ministership before being jailed for corruption. Sasikala’s nephew TTV Dhinakaran has launched AMMK and even won Jayalalithaa’s RK Nagar constituency in a by-election.

The AIADMK and BJP had been waiting for actor-politician Rajinikanth to clear his stand. He has declared that he would not contest the polls and that no party should use his outfit to capitalise on votes. The other star-politician, Kamal Hassan has often criticised the BJP, and is mostly likely to opt for the anti-BJP alliance or go alone.

BJP leaders believe that despite the anti-incumbency against the AIADMK government, the coalition could be a formidable electoral force, especially after the “popular Budget” presented by the E Palaniswami government recently.

The BJP is hoping to complete its pre-poll alliances before the first week of March. The BJP yesterday finalised its alliance with the Shiv Sena in Maharashtra. After Maharashtra and Tamil Nadu, the party is keen to finalise deals with its existing partners in Uttar Pradesh: the Apna Dal and Suheldev Bharatiya Samaj Party. The party has already finalised seat-sharing formula with the JD(U) and Ram Vilas Paswan’s Lok Janshakti Party in Bihar.