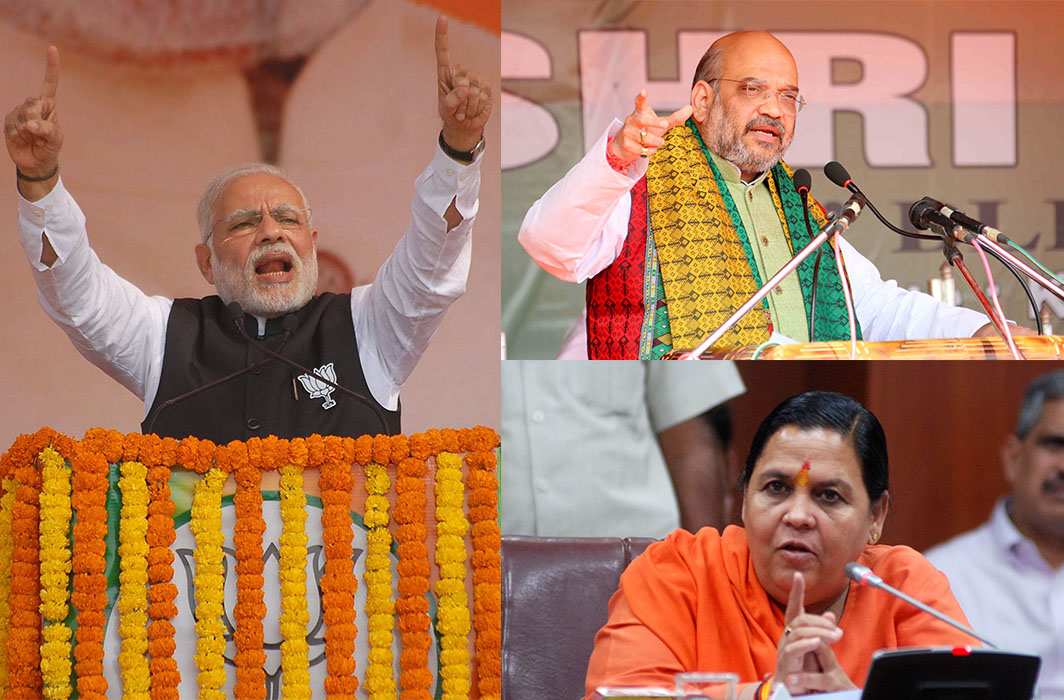 There is little doubt that the Bharatiya Janata Party (BJP) is emotionally, ideologically and politically invested in Uttar Pradesh. The most populous state is at the heart of the Hindu heartland. BJP does not fight shy of the fact that it is a Hindi heartland party. As a matter of fact it wants to flaunt it even.

Prime Minister Narendra Modi has set his heart on UP from 2013 onwards when he was declared the prime ministerial candidate of the party in the 2014 Lok Sabha election. First, he chose to contest from Varanasi, with its unmistakable Hindu connection. Then he deputed Amit Shah, his Gujarat confidante to focus on UP in 2014. The strategy seemed to have paid off. The BJP won 73 of the 80 Lok Sabha seats in the state. It was natural that Shah was credited with the success of the BJP juggernaut in UP, and he was rewarded by making him the president of the party.

Now, both Modi and Shah want to prove that they have grown roots in UP. As one of Modi’s cabinet ministers said on condition of anonymity, “We (the BJP) want to prove that 2014 Lok Sabha election was no fluke.” So, Modi, Shah and the rest in the party are sparing no effort to win in the state. Shah’s constituency by constituency, booth by booth – BJP leaders lay much store by their booth management skills – approach which paid dividends in  2014 is ostensibly replicated this time round. And it is believed that it will work a second time round. What the BJP fails to understand is that it is not the thoroughness of the preparation alone that matters, and that it depends on more than anything else it depends on the preference of the people as such.

Apart from the desire and determination to win UP, the BJP strategists also seem to believe that they have been dealt a winning hand as it were when the electoral cards were shuffled. They think that the political appeal of Samajwadi Party (SP) is confined to its core constituency of Yadavs and not to the whole spectrum of the backward classes/castes, and that of Bahujan Samaj Party (BSP) to Jatavs and not to Dalits in general. Another Union minister, who gives the spin to the BJP thesis, says that half of the Muslim vote would go to the SP, and the other half to BSP.

In contrast, the minister arguing the case of electoral prospects of the party said that the upper castes are with the BJP, and so are the various segments of the other backward classes/castes and the remaining Dalits, the Valmikis. Of course, it is a big presumption. Even if it is assumed that many of backward class segments would not go with the SP, and therefore could vote for BJP because Congress, the other big national party in the fray in the state, is not a big players anymore and it has reduced itself to the status of a junior alliance partner to SP, the big local players. There is also the possibility that the BJP would want to choose a candidate from one of the non-Yadav backward classes as a chief ministerial candidate. But rivalries between the many non-Yadav backward classes/castes are conveniently ignored by the BJP spinmeisters. It is also not clear as to why the non-Jatav Dalits, the Valmikis, should choose BJP because they have not much to gain from the bargain. The BJP will not be able to please them all with the temptation of office.

What is interesting in the BJP is argument is that there is ideological thrust to the campaign though there is a subtle and not-so-subtle Hindutva or Hindu communalism at play here. The BJP is reconciled to the fact that Muslims will not vote for it, and so it does not factor in Muslims in its caste/community electoral calculus. If the BJP leaders are embarrassed about it, they do not show it. But they are displaying hard-nosed political realism by not counting on Muslims, but they are overstating their case by assuming that the Muslim would split, almost in half between the SP and BSP.

The other big assumption of the BJP, and even that of the pollsters, is that it is not a three-cornered contest where SP-Congress, BSP and BJP are all equal contenders and that that the vote would split three-ways. The complexity is simplified by reducing BSP into a distant third, and that it is essentially a contest between SP-Congress on the one hand and the BJP on the other. It is not even being contended that it could be a battle between BJP and BSP. This is a grudging recognition by the BJP that Akhilesh Yadav has clawed his way back into the contest.

Though there are some who are arguing that the BSP is the silent player which would steal the show on Saturday, there seems to be no reliable or tangible proof that the BSP outreach to the other castes and communities is gaining traction or not. This does not mean that BSP has failed to reach out beyond its core constituency. It just means that the pollsters have failed to detect it. Even the ardent supporters of BSP in media have not argued convincingly enough that a significant number of Muslims and Brahmins have been won over by party of Dalits. There is of course the plausible inference that Muslims are not too happy with SP post-Muzaffarnagar riots of 2013.

There are enough chinks in the constructed political armour of the BJP, which could turn out to be a sour point on Saturday.