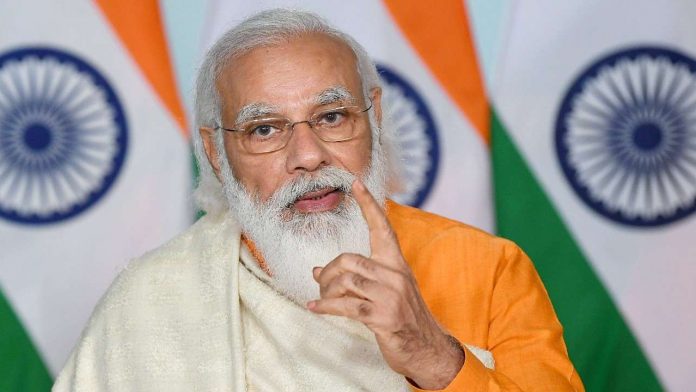 Prime Minister Narendra Modi on Tuesday asked his party colleagues to maintain restrain and protect the dignity of the House while slamming the Opposition for disrupting Parliament‘s monsoon session proceedings.

PM Modi, who has been flagging the issue of disruption in Parliament for over the past few weeks, said the lawmakers should ensure that the dignity of the House is maintained. He said repeated adjournments forced by Opposition were an insult to Parliament, the Constitution, the democracy, and to the people.

According to people aware of the details, the Prime Minister asked party MPs not to lose calm as the opposition continues their chaotic protests inside both Houses. He underlined the need to expose the Opposition’s attempts to derail the session while reiterating that BJP MPs should not give in to provocation, but remain present in the House for parliamentary business.

PM Modi also attacked Opposition leaders like Trinamool MP Santanu who snatched IT Minister Ashwini Vaishaw’s papers as he was about to make a statement on the Pegasus scandal, and Trinamool MP Derek O’Brien, who made the derogatory remark “making papri chaat’ on the passage of bills in Parliament.

The prime minister said the Parliament is being insulted by the acts of the Opposition in both Houses. The person who snatched the paper and tore it is not repentant of his acts. Hitting out at O’Brien, Parliamentary Affairs Minister Prahlad Joshi and Rajya Sabha Deputy Chair MA Naqvi said they are ready to discuss all bills and don’t want to rush through. One member from Trinamool has insulted Parliament, he should apologize to the country, they said.

Both the Houses have been witnessing ruckus with the Opposition parties, who have stalled Parliament’s proceedings demanding a discussion on the farm bills and Pegasus snooping row, an issue dismissed as inconsequential by the government.

Meanwhile, PM Modi was hailed at the meeting for the government’s decision to provide reservations to the OBC and the EWS in the all-India quota of medical entrance test NEET. According to an MP, Modi also said July brought in happy news for the nation with Rs 1.16 lakh GST collection and bronze medal won by ace shuttler PV Sindhu in Tokyo Olympics.

According to sources, finance minister Nirmala Sitharaman was quoted saying that the welfare schemes initiated by the government have given relief to the poor who were facing issues due to the Covid pandemic. Despite the second wave of Covid-19, she said India’s economy is progressing rapidly, it has picked up after a lull from June -July. The government has given ₹4.5 lakh crore for MSME support, she added.