BJP MP Pragya Thakur, who is out on bail on medical grounds, playing kabaddi video goes viral, says man who shot her video is Ravana 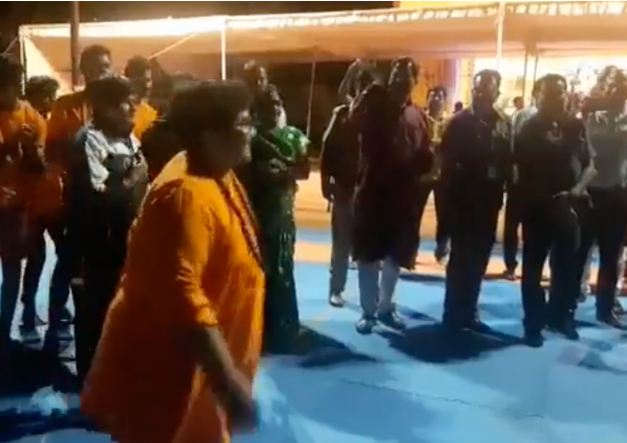 BJP MP Pragya Thakur was confined to a wheelchair for a long time and was granted bail on the medical grounds. However, now a video started doing rounds on the internet in which Pragya Thakur was seen playing kabaddi and was looking fit and healthy. The video started doing rounds on the internet, and soon after caught the attention of BJP MP and she jinxed the man who shot her video and even termed him as Ravana.

In the recent video, Pragya Thakur was seen addressing people on the occasion of Dussehra in Bhopal’s Sant Nagar, a Sindhi community dominated area. She said that two days ago, she went to a pandal to offer aarti, where some sportsmen who were on the ground asked her to conduct a raid and a small clip of that was shot, and was given to the media.

Pragya Thakur also said that whoever circulated her video is a Ravana, she is not his enemy, but the man is surely her enemy. She further said that she have no idea what precious things she snatched from that man, but Ravana can be everywhere.

Read Also: World Boss Day 2021: From The Office’s Michael Scott to The Bold Type’s Jacqueline Carlyle, best show bosses we would love to work for

She further jinxed the man’s old age and said that those who mess with revolutionary people their end comes, not even Ravana or Kans survived, and neither will adharmi and vidharmi will survive.

Earlier, a video of Pragya Thakur playing kabaddi went viral on the internet. Now, a video started doing rounds in which BJP MP was performing garba.

However, Pragya Thakur’s sister Upma Thakur defended her and said that she suffers from spine problem and that can give trouble to her anytime, whenever the problem comes, she is left with no sensation, it can happen even when she gets down from a vehicle.