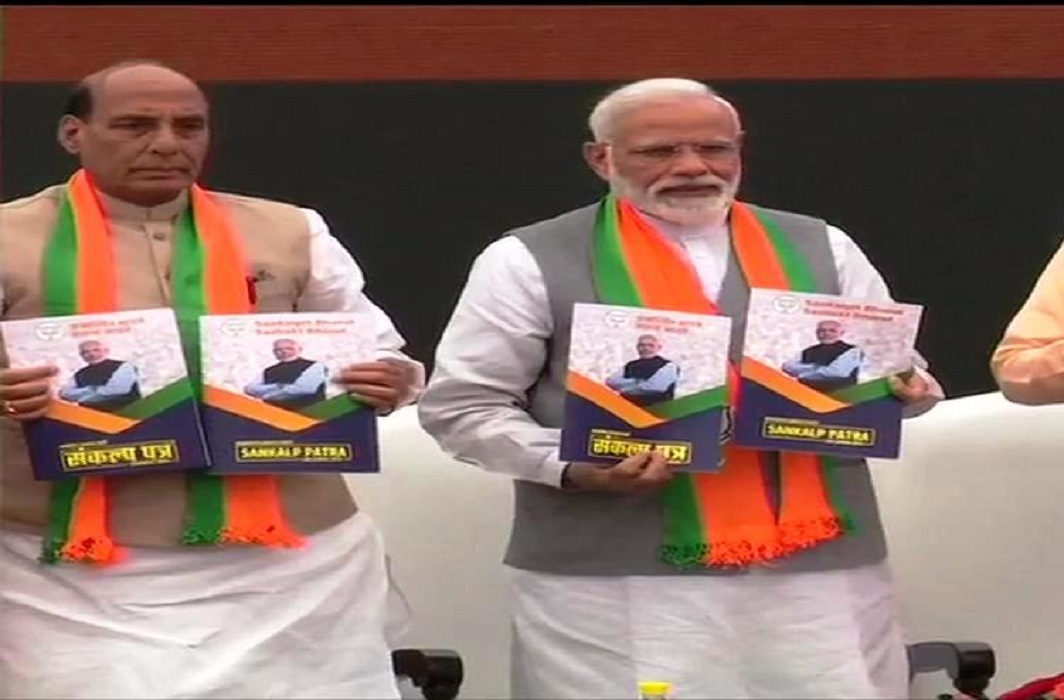 Prime Minister Narendra Modi along with the BJP president Amit Shah, Home Minister Rajnath Singh, Finance Minister Arun Jaitley among other senior BJP leaders were present at the mega event of the Bharatiya Janata Party, where the party members gathered to release their manifesto for the 2019 Lok Sabha Elections.

While addressing at the mega event, party President Amit Shah said, “In 2014, the people of the country gave us a massive mandate and PM Modi became the PM. Despite a massive mandate on our own, we made an NDA government in 2014.”

“In these 5 years, the BJP has worked towards providing a decisive government under the leadership of Narendra Modi. Our country is now counted as a world power. I believe our position in the world will improve further,” Shah added.

“Most households in the country today have electricity. There are more than 8 crore toilets, 7 crore houses have been provided with gas connections, free medical treatment has been ensured for 50 crore poor people,” Shah said.

“The Narendra Modi government has taken more than massive 50 steps in five years to be part of history. From 2014-19, our government has transformed the country. India’s development from 2014 to 2019 will be written in golden words in history,” BJP president said.

Rajnath Singh addressed the people saying, “The sankalp patra (or manifesto) is being presented as a vision document to 130 crore Indians. The manifesto was prepared after taking suggestions from various people.Our images has improved internationally. We are now aiming to be among the top 3 counties in the world.”

“People of the country see hope in PM Narendra Modi. We have been successful in setting up a responsible, sensitive government. We are fully committed towards nationalism. We had a zero tolerance policy towards terrorism. It will continue till terror is not eliminated completely. We will use full force to stop infiltration,” Rajnath added.

“Political parties have made many promises in their manifestos, creating a crisis of credibility. We have taken this crisis of credibility as a challenge, and have largely been able to overcome it. With all our promises made in this manifesto, we are taking a step towards building a ‘New India’,” Rajnath said.

“Our new security doctrine has made India among the most powerful nations in the world. Our new terror policy of striking terror in its root has received global support. Our fiscal prudence since 1947 has been the best ever for any government. The essence of BJP’s manifesto is to deplete poverty over next five years to single digit, and then eventually eliminate it,” Jaitley added.

Things you should know about BJP poll manifesto:

For strengthening the armed forces, purchase of outstanding defence equipment will be fast tracked.

Zero tolerance towards terrorism. Security forces will continue to get a free hand.

Technology will be used to prevent infiltration in the north-east; smart fencing will be used

Reiterate position since the time of the Jan Sangh, to scrap Article 370 (special status to Jammu and Kashmir); committed to annulling Article 35A or the law which says that no outsider can own property in Jammu and Kashmir

Interest-free kisan credit card loans, short term agricultural loans up to Rs. 1 lakh to be given at zero per cent interest, for one to five years, on the condition of prompt repayment of principal amount

Sankalp Patra aims to fulfill the aspirations of 130 crore Indians

Pucca houses by 2022, for every family who are living in a kuccha house or have no house

Investment of Rs. 100 lakh crore in the infrastructure sector by 2024