Home Special tv shows Mudda (debate show) “BJP will have to face the music for failure to build Ram... 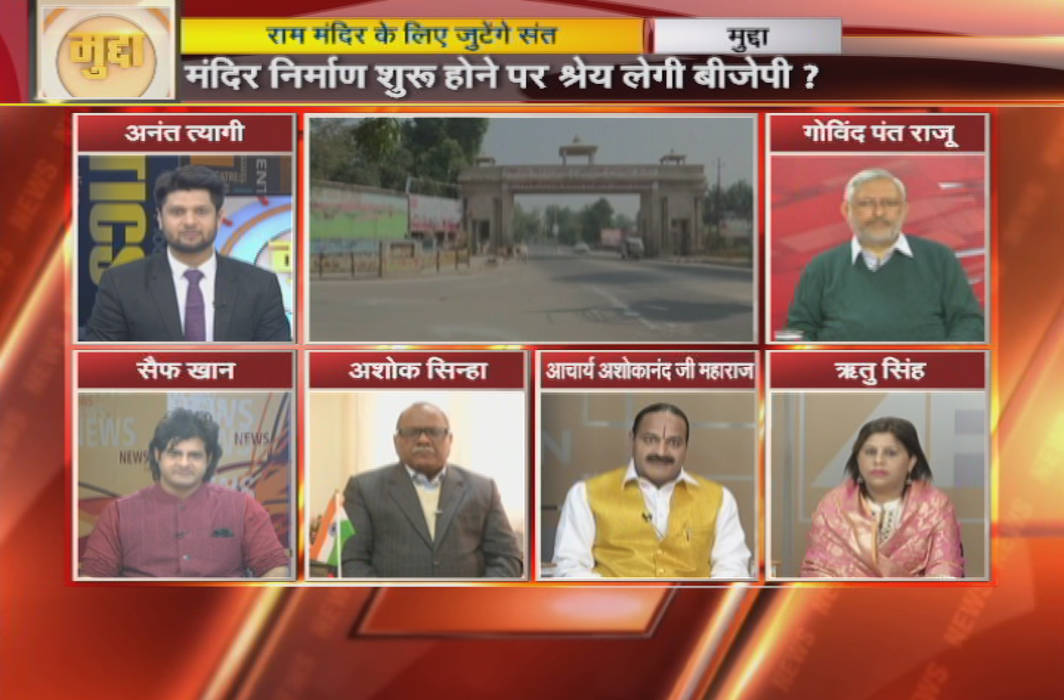 Kumbh mela has provided the platform to again revive talks of Ram mandir. Sadhus and sants are miffed with the BJP and asking why the BJP did not go all-out to ensure the construction of the temple at Ayodhya. APN’s popular debate Mudda discussed the issue.Anchorperson Anant posed the questions to panelists including the Congress’s Saif Khan, BJP’s Ritu Singh, Sangh vicharak Ashok Sinha, Acharya Ashokanand Ji Maharaj of Patidishwar Bisarakh Dham, Muslim expert Rajik Vadud and APN consultant Govind Pant Raju.

Acharya Ashokanand Ji Maharaj said: “The ball is in the BJP court.”

Khan said: “BJP is playing politics. Advani ji took out the rally, it was in the BJP manifesto, but the ground reality is vastly different from what is promised. Where is the ordinance on this? It was in Congress tenure that the doors to the temple were opened. This is why we call BJP the jumla party.”

Sinha said: “It is a national matter. Muslim sections are not with us on this. One way is to go with mutual consent, the other is to wait for the court decision, and the third is that the BJP takes some pro-active measures, but we have been disappointed by all. RSS will now start a campaign on this.”

Raju said: “Earlier, Ram mandir was on the top of BJP’s agendas, now it has come to the last page. The BJP’s stand is that the court will decide. No one today can announce any date for this because the matter is with the court. So that’s why there is anger among the sadhus.”

Acharya Ashokanand Ji Maharaj said: “This has become a political issue now. Since the BJP had declared in its manifesto its aim to build the Ram temple, people are bound to feel let down.”

Singh said: “The Congress had never said it will build the temple, BJP has always said so.” Khan asked why BJP can’t pass an ordinance or a bill for this? Singh said:”All now vests with the SC decision.”

Khan said: “Sangh and BJP senior leaders like Mohan Bhagwat and Keshav Prasad Maurya have declared that they will build the temple anytime. Their double-sided views on this are obvious.”

Anant pointed out that for the court it is a title dispute, no faith involved in the court study.

Singh said: “BJP wrote in its manifesto. BJP wants the mandir to be built as soon as possible.” Anant pointed out that Subramaniam Swamy had said ram mandir will be built in 2018.

Swami Chakrapani Maharaj of Akhil Bharatiya Hindu Mahsabha, who came on the programme to make a special comment, said: “The demand for the temple is not unconstitutional. BJP will have to face the music for going back on its promise.”

Singh said: “Please accept that there is no dual talk from the BJP side on this.”