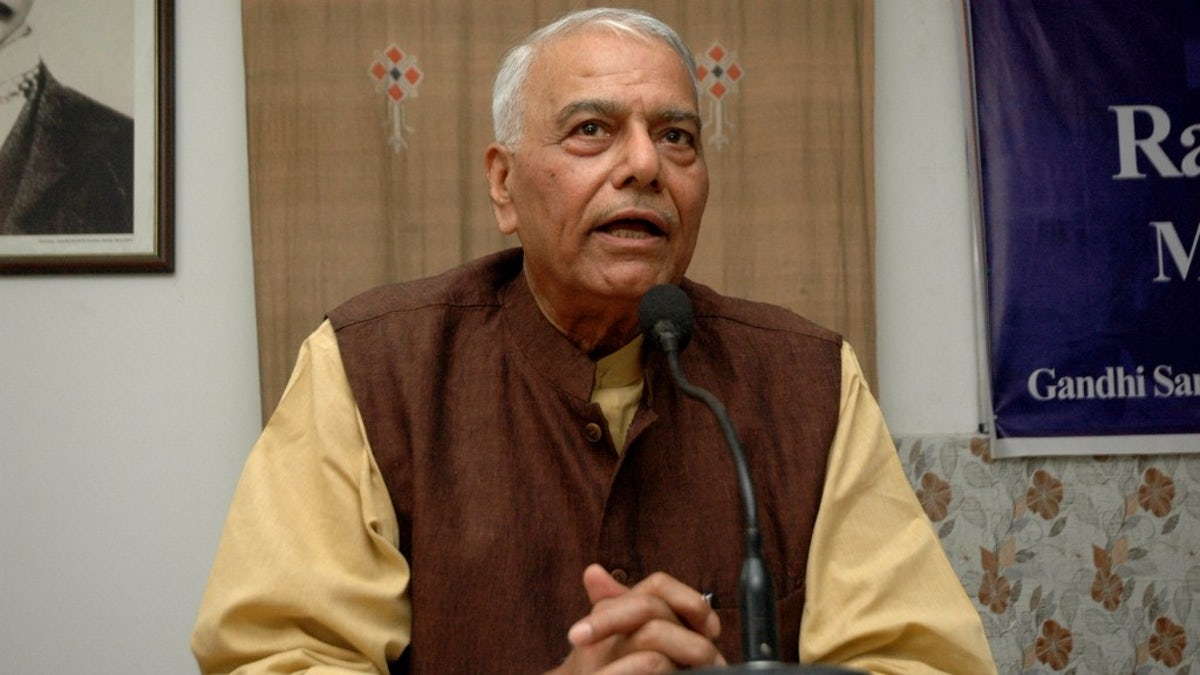 In an editorial for The Indian Express, the former finance minister indicts Jaitley for making a “mess” of the Indian economy, says he’s working “over-time” to ensure that all Indians see poverty at close quarters

In a no-holds barred critique of Prime Minister Narendra Modi and Union finance minister Arun Jaitley’s handling of the Indian economy, former finance minister and member of the BJP’s ‘margdarshak mandal’ Yashwant Sinha has echoed sentiments that until now were being voiced largely by members of the Opposition and some economic experts.

Sinha’s editorial in the Indian Express titled ‘I need to speak up now’ could not have come at a more opportune or worse time for the Modi government – depending on whose side the beholder stands.

While the Modi government has been working over-time to ward off allegations of pushing the Indian economy towards an impending doom with its demonetisation and hasty rollout of the Goods and Services Tax (GST) regime, Sinha has lambasted Jaitley for “working over-time to make sure that all Indians” see poverty from “close quarters”.

The most hard-hitting attacks by the BJP veteran, who served as India’s finance minister during the Atal Bihari Vajpayee regime, have predictably been reserved for Jaitley. Sinha starts off by saying: “I shall be failing in my national duty if I did not speak up even now against the mess the finance minister has made of the economy.”

Interestingly, Sinha’s son Jayant, served briefly as minister of state for finance under Jaitley during the initial days of the Modi government. He was then moved out to the civil aviation portfolio – a shift that seemed to have more to do with his father’s strong views against the Modi government on critical issues than his performance as the junior finance minister – a role, many say, he was perfectly suited to.

Noting that he is convinced that his views are shared by “a large number of people in the BJP and elsewhere”, Sinha says that these people “are not speaking up out of fear”. At a time when almost anyone – including leaders from within the BJP (read: the likes of Sultanpur MP Varun Gandhi) and even ministers in the Modi government (ask Ravi Shankar Prasad) – who doesn’t condone the government or its ‘bhakts’ is subjected to unprecedented abuse on social media platforms like Twitter and stares at the wrath of the Pradhan Sevak, Sinha couldn’t have made a more accurate assumption of the situation.

Sinha says of the incumbent finance minister: “Arun Jaitley is considered to be the best and the brightest in this government… His losing his Lok Sabha election from Amritsar was not allowed to come in the way of this appointment (as finance minister)… His indispensability was established further when the prime minister rewarded him not only by giving him the finance ministry including the department of disinvestment, but also the ministries of defence and corporate affairs. Four ministries in one go out of which he still retains three.”

The former finance minister then goes on to rip Jaitley’s handling of the finance portfolio to shreds. “I have handled the ministry of finance and know how much hard work there is in that ministry alone. Finance ministry, in the best of times, calls for the undivided attention of its boss if the job has to be properly done. In challenging times it becomes more than a 24/7 job. Naturally, even a superman like Jaitley could not do justice to the task,” Sinha writes.

Claiming that Jaitley – “a lucky finance minister, luckier than any in the post-liberalisation era” wasted the ‘oil bonanza’ that the Modi government benefitted from in wake of the “depressed global crude oil prices (which) placed at his disposal lakhs of crores of rupees” Sinha says, the de-facto number 2 in the Modi cabinet not only allowed legacy problems like stalled projects and bank NPAs (non performing assets) to persist, but made them worse.

Sinha also endorsed the Opposition’s, in particular the Congress party’s, claims that the country’s GDP and growth indices were actually lower than what were being projected by the Modi government but that the current figures being thrown around by the likes of Jaitley, his ministerial colleagues and BJP spokespersons were actually arrived at by cleverly tweaking the manner in which they are calculated.

“The methodology for calculation of the GDP was changed by the present government in 2015 as a result of which the growth rate recorded earlier increased statistically by over 200 basis points on an annual basis. So, according to the old method of calculation, the growth rate of 5.7 per cent is actually 3.7 per cent or less,” Sinha writes.

It may be recalled that even this 5.7 per cent GDP growth rate is actually a three-year low and Jaitley himself had called the slump a “matter of concern.” Yet, the BJP leadership, Jaitley, of course included, had recently during the party’s national executive meet claimed that the Indian economy was actually flourishing under the Modi regime and that India had seen “unprecedented growth and development” since May 2014 – when the NDA stormed to power.

In his summary of the country’s economic condition, Sinha points to a picture that can at best be dubbed as abysmal. “Private investment has shrunk as never before in two decades, industrial production has all but collapsed, agriculture is in distress, construction industry, a big employer of the work force, is in the doldrums, the rest of the service sector is also in the slow lane, exports have dwindled, sector after sector of the economy is in distress, demonetisation has proved to be an unmitigated economic disaster, a badly conceived and poorly implemented GST has played havoc with businesses and sunk many of them and countless millions have lost their jobs with hardly any new opportunities coming the way of the new entrants to the labour market,” Sinha writes.

The BJP margdarshak also took a sharp swipe at BJP national president Amit Shah for recently declaring that the slump in the GDP was due to “technical reasons” and not because of Modi’s demonetisation or the GST rollout.

“Even the SBI, the largest public sector bank of the country, has stated with unusual frankness that the slowdown is not transient or “technical”, it is here to stay. It has openly contradicted what the BJP president said just a few days ago that the slowdown in the last quarter was on account of “technical” reasons and will be corrected soon. According to the SBI chairman, the telecom sector is the latest entrant to the long list of stressed sectors,” Sinha writes.

Sinha also raised doubts on whether Modi’s recent decision to revive and reconstitute the UPA-era Prime Minister’s Economic Advisory Council, with NITI Aayog member Bibek Debroy as its head, would prove worthy of the ominous task of bringing the economy out if the doldrums.

“The prime minister is worried”, Sinha notes, adding that a “meeting convened by the prime minister with the finance minister and his officials appears to have been postponed indefinitely”. He goes on to then mock at the EAC saying: “Like the five Pandavas they (the five EAC members) are expected to win the new Mahabharat war for us.”

In the backdrop of the large scale raids that agencies like the CBI, Enforcement Directorate and the Income Tax department have been forced to undertake across India after demonetisation and the GST rollout to nab alleged black money hoarders and tax evaders, Sinha says: “Instilling fear in the minds of the people is the name of the new game.”

“We protested against raid raj when we were in opposition. Today it has become the order of the day. Post demonetisation, the income tax department has been charged with the responsibility of investigating lakhs of cases involving the fate of millions of people. The Enforcement Directorate and the CBI also have their plates full,” the BJP veteran says.

Adding his weight behind the Opposition’s argument that the Modi government is all about making tall claims and delivering little, if not nothing, Sinha says of the government’s proposed moves to revive the economy: “A hard landing appears inevitable. Bluff and bluster is fine for the hustings, it evaporates in the face of reality.”

Evidently, the Opposition, especially the Congress party, is overjoyed at the BJP insider’s vociferous criticism of the Modi government.

Yashwant Sinha speaks Truth to Power. Will Power now admit the Truth that economy is sinking?

ETERNAL TRUTH: No matter what Power does, ultimately Truth will prevail.

Congress vice president too took an effective dig at the BJP, using Sinha’s editorial as ammunition.

Ladies & Gentlemen, this is your copilot & FM speaking. Plz fasten your seat belts & take brace position.The wings have fallen off our plane https://t.co/IsOA8FQa6u

The BJP and the Modi government are yet to reply to Sinha’s attack but given their past record one can expect a full panel of senior ministers and party spokespersons surfacing in television news studios and for briefings to hit back with “bluff and bluster”.